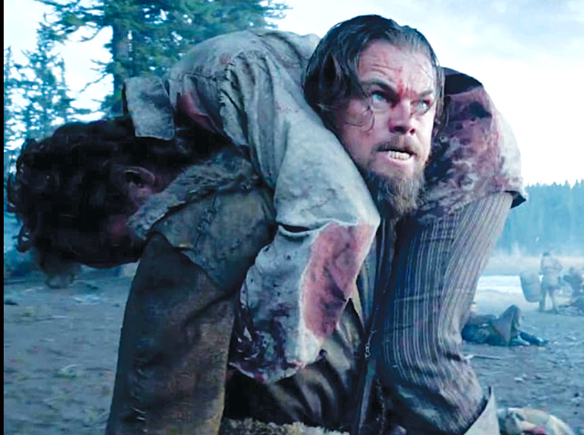 Sunday, Feb. 28 marked the 88th Academy Awards presentation, but unfortunately a great deal of controversy was generated prior to the telecast. There was even the threat of a possible boycott because no actors of color were nominated this year, or last.

Sunday, Feb. 28 marked the 88th Academy Awards presentation, but unfortunately a great deal of controversy was generated prior to the telecast. There was even the threat of a possible boycott because no actors of color were nominated this year, or last.

Fortunately the show went on as planned and Chris Rock spoke about “the whiteout” with wit, flair and fairness in his opening monolog.  He teased that he could have turned down the gig as MC in protest, but then the job would have gone to comic Kevin Hart who, according to Rock, makes “about a movie a week.” He then pointed out that it’s great to get a golden statuette, but what really matters in the long run is getting work within the industry.

And even though the acting nominees this year were all white, the televised ceremony was filled with an abundance of black performers — a very funny, talented host, Chris Rock, the orchestra leader and actors in the comedy sketches like Whoopie Goldberg, a past Oscar winner and host. It should also be duly noted that the major award of the night went to Mexican director Alejandro G. Inarritu for “The Revenant.”

Inarritu won an Oscar last year as well for “Birdman,” so this was a major achievement in his career since back to back directorial Oscars have only been awarded twice before in Oscar history.

While many felt the so-called Oscar “whiteout” was a snub to people of color, I thought about the quintessential movie star of yesteryear, Cary Grant. Not only was he one of the most talented actors in the history of cinema, he was charismatic, witty and the epitome of charm and elegance. And yet, he never won an Oscar. It was only toward the end of his life that he was given an honorary Oscar for his contribution to the world of film. Despite this oversight by the Academy, Cary Grant was, and always will be, unforgettable.

Now back to this year’s Oscar ceremony. As always, the gowns were lovely.  The men also looked smart, but a tux is just a tux.  On the other hand, a gown and lots of diamond bling is something to ‘ooh and ahh’ about. Two of the loveliest gowns were worn by Alicia Vikander (Oscar winner for “The Danish Girl”) and Cate Blanchett (“Carol”).

Another plus for this year’s ceremony is the fact that the orchestra was in the Dolby Theater rather than at Capitol Records a few blocks away, so the band was playing live at the telecast.  It was also great to hear Lady Gaga and Sam Smith sing the original nominated songs they had written for “The Hunting Ground” and “Spectre.”

It was also fun to see young Jacob Tremblay’s face light up when the “Star Wars” droids R2D2, BB-8 and C-3PO came out on stage.  (Tremblay is the terrific child actor from “The Room” who, despite his terrific performance in the film, didn’t get nominated.)  In the skit C-3PO pointed out that the golden Oscar looked just like him. And speaking of “Star Wars: The Force Awakens,” the film didn’t take home a single golden Oscar, but it has grossed over $2 billion globally, more than all eight Oscar nominated films put together.

On the downside, this year’s telecast needed some judicious editing.  It took too long to get to the main awards of the evening because the show went on well past the allotted three hours.  Often less can be more!

In the major categories, Oscars were awarded to: