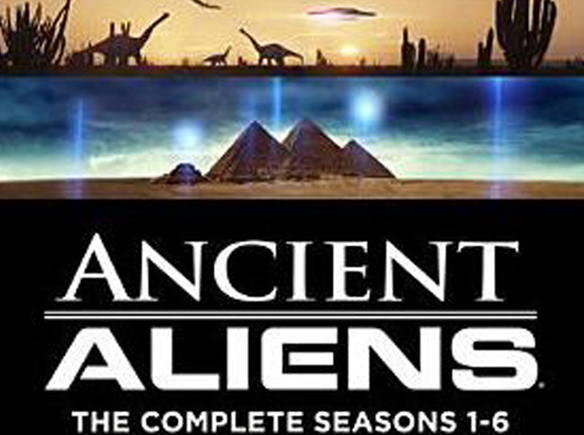 It’s hard to believe, but the holidays are just around the corner.  Oh where has 2014 gone?

If you shop early, DVDs always make fun gifts so here are some new DVD releases to consider.  Or you may just want to get in the spirit of the holidays with “The Thanksgiving Treasure” and “The House Without a Christmas Tree” or “John Denver The Christmas Gift.”

It’s hard to believe, but the holidays are just around the corner.  Oh where has 2014 gone?

If you shop early, DVDs always make fun gifts so here are some new DVD releases to consider.  Or you may just want to get in the spirit of the holidays with “The Thanksgiving Treasure” and “The House Without a Christmas Tree” or “John Denver The Christmas Gift.”

“Ancient Aliens: The Complete Season 1-6” would be a fun surprise for fans of  the A&E television Series.  The 23-disc collection contains all six seasons, which is a grand total of 82 episodes that will provide over 68 hours of viewing pleasure.  The set also includes 12 never-before -released episodes.  The series, a blend of adventure, mystery and science fiction, goes back over 10,000 years as it explore ancient and mysterious subjects from sacred relics, artifacts and wall carvings to technologies, places and lore in a search for humankind’s origins.  The series also provides new interpretations of ancient texts and reveals new historical possibilities. Whether you believe the findings or not, the series raises all kinds of interesting questions guaranteed to fuel the imagination.  And if you are a writer, particularly of science fiction, you may be inspired to create stories of your own.

Some of the questions raised and explored: Were ancient gods really aliens? Was Satan really humanity’s ally in the Bible? (Interesting idea, but probably not one that true believers will ever embrace.) This series also uncovers the alien dimension within secret codes, deadly cults, mega-disasters and plagues and alien connections to dinosaurs, NASA and even the Third Reich.  It also considers time travel, underwater UFO activity, ancient Martian civilizations and the possibility that some children have alien DNA.  (That may be the reason why you can’t always reason with your kids.)  The questions raised in the series are fun to ponder. Suggested retail price: $99.98.

In the Phineas and Ferb  epic full-length adventure you go to a galaxy far, far away where the duo are basking in the glow of Tatoonie’s twin suns, until plans for the Death Star accidentally fall into their hands.  Will they be able to resist the Dark Side? The DVD also features 5 additional episodes for over 2 hours of action-packed fun.  Come join the fun and let the Ferb be with you!  Rated TV G.

“Star Wars: The Clone Wars: The Lost Missions” is set against a backdrop of ever-shifting loyalties, uneasy alliances and ancient hostilities as some of the deepest mysteries of the light and dark sides of the Force are revealed. An intrepid clone trooper uncovers a shocking conspiracy and Master Yoda makes a discovery that could forever change the balance of power in the galaxy.  “Star Wars” fans won’t want to miss this one.  Bonus features include a never-before-seen 16-minute documentary that celebrates the entire “Clone Wars” series with riveting behind the scenes footage.  Rated TV PG and the running time is approximately 287 minutes.

Get into the holiday spirit with the double-feature  based on the beloved novels by Gail Rock: “The Thanksgiving Treasure“ and “The House Without a Christmas Tree.”  The two-film collection follows the small miracles of the Mills family.  Addie Mills is a smart, strong-willed young girl living in Nebraska in the 1940s with her sensible but stubborn father James (Jason Robards) and her loving, quirky Grandma (Mildred Natwick).

In the Thanksgiving feature Addie tries to invite her father’s sworn enemy over for the holiday dinner in the hopes of ending their longstanding feud.  In  the Christmas story, Addie wants to have a Christmas tree for the first time, but her father refuses as the holiday brings with it painful family memories.  Suggested retail price: $19.95.

“John Denver: The Christmas Gift” is now on DVD for the first time.  The story follows a recently widowed architect (Denver) and his young daughter as they  travel in Colorado.  During their trip they find a mystical small town where everyone still believes in Santa Claus.  This warm tale about the true meaning of Christmas also stars Jane Kaczmarek.  Running time: 1 hour and 34 minutes. SRP: $14.99.

Honey Boo Boo fans will want to check out “Here Comes Honey Boo Boo—A Very Boo Christmas” which was released in October.   In this 86 minute DVD the family gears up for their annual Christmas display and charity drive.  Frugal June refuse to throw away broken Christmas decorations and when it comes time to shop the whole family heads out to the flea markets where they discover the joy of re-gifting.  As a bonus, Honey Boo Boo gathers the family to share their most memorable moments from the series.  One memory focuses on Glitzy the Pig.  Other family moments include the arrival of baby Kaitlyn, Mama June’s sneezing fits and more.  SRP: $29.93,

Arriving on Blu-ray and DVD on Nov. 18 is “22 Jump Street“ staring Jonah Hill and Channing Tatum.   Clint Eastwood’s “Jersey Boys” is already out on DVD and is a musical tribute to Frankie Valli and The Four Seasons.”

Law and order in the time of Coronavirus