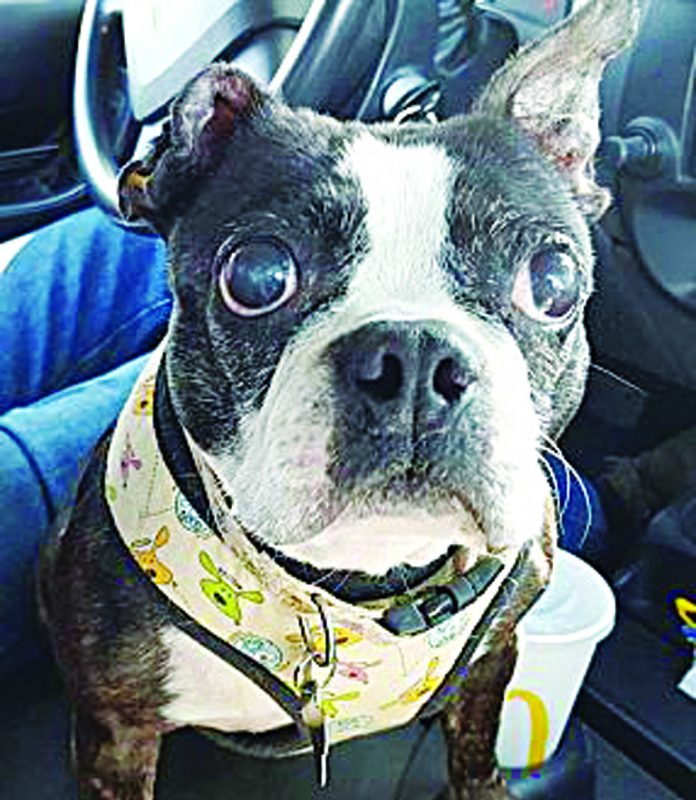 Boston Buddies works to give Boston Terriers a loving life

In early 2003, a small group of women in Southern California who shared a passion for Boston Terriers began noticing an increasing number of the black-and-white dogs showing up in the local animal shelters. They saw these dogs sitting in the kennels for weeks at a time, waiting for owners who never came. It was painful for them when they heard of one being euthanized due to lack of space at the overloaded shelters.

They knew they needed to take action to save these living creatures.

Boston Buddies works to give Boston Terriers a loving life

In early 2003, a small group of women in Southern California who shared a passion for Boston Terriers began noticing an increasing number of the black-and-white dogs showing up in the local animal shelters. They saw these dogs sitting in the kennels for weeks at a time, waiting for owners who never came. It was painful for them when they heard of one being euthanized due to lack of space at the overloaded shelters.

They knew they needed to take action to save these living creatures.

Their efforts began by picking up dogs in danger at local shelters and then figuring out what to do with them. Many afternoons and evenings, the women found themselves driving around town with a dog in the car and no place to go. There was no formal plan, and no idea what to do with the rescued dogs.

Nonetheless, the ladies rescued the dogs and found them forever homes with family and friends. A real plan was obvious to them if they were to make any difference to helping more than just a handful of dogs.

Boston Buddies was incorporated on June 12, 2003 as a California nonprofit Public Benefit Corporation dedicated to the rescue and re-homing of any Boston Terrier or Boston Terrier mix in need. Boston Buddies received a Letter of Determination from the IRS regarding our 501c3 nonprofit status on Aug. 29, 2003 and a Letter of Exemption from the California Franchise Tax Board on Sept.30, 2003.

“Our area of operation has expanded from its original area of coverage in Los Angeles to encompass all of Los Angeles, Orange, San Diego, Riverside, Santa Barbara, San Luis Obispo, Kern and Ventura counties, as well as other surrounding areas where a need exists,” a BB spokesperson said. “The ultimate purpose of Boston Buddies is to match homeless or potentially homeless Boston Terriers and Boston Terrier mixes with loving permanent families specifically interested in the breed.”

Each dog that enters Boston Buddies rescue program is examined by a veterinarian and provided with all necessary and reasonable medical treatment, vaccinated, spayed or neutered, micro chipped and placed on heartworm and flea preventative. Boston Buddies provides temporary foster care and personality assessments of the dogs.

“Our adoption process includes an extensive Application and a home visit by one of our volunteers with potential adopters,” a BB spokesperson said. “We require all of our adopters to sign an Adoption Agreement with us and there is an adoption donation fee for each of our dogs.”

In 2003, the few original founders were able to rescue and place 63 lucky dogs into loving homes. Since its inception, Boston Buddies has assisted more than 1,500 dogs. Boston Buddies has remained committed to assisting those dogs truly in need of rescue – the sick dogs, the senior dogs, dogs with special medical and/or behavioral needs that likely would not be addressed with other rescue groups or individuals due to lack of funding and/or internal policies relating to behavioral assessments.

The special needs nature of the majority of the dogs coming in to rescue has resulted in increased expenditures of resources (both volunteer effort and money) and time necessary to find them their forever homes.

“We have also developed cooperative working relationships with other Boston rescue groups and have worked with them to insure that all dogs in need of rescue are assisted at times when Boston Buddies is at its maximum capacity.”

One of the more troubling developments during the past few years has been the significant increase we saw in the number of Bostons being turned over to us by their owners.

The number of active BB volunteers has remained extremely low. There are only seven members of the Charter group of Boston Buddies, about half of which devote at least some time on a daily basis to the rescue efforts. These devoted individuals volunteer as much of their time as is possible outside of their paying jobs and family responsibilities.

These volunteers come from all walks of life: educators, attorneys, writers, office workers, administrators and stay at home moms. The common thread among them all is a shared passion for Boston Terriers and for animal welfare in general. Many of these members extend their efforts in the rescue community to breeds and species beyond Boston Terriers and dogs – offering whatever help they can when they see an animal in need.

With the increase in the number of dogs and a focus on special needs dogs came increased costs. Without the support of our donors we could not continue to exist and carry out our mission. The fundraising efforts include the annual Boston Tea Party, a Boston Buddies Rescue Calendar, online silent auctions and specific pleas throughout the year for particular dogs in need.

BB’s supportive group of donors always rises to the occasion and their combined generosity has allowed us to continue our efforts from year to year. Boston Buddies has also developed a presence on Facebook with over 11,000 Fans. “This is the primary way we communicate with our followers and supporters and where we post our needs for volunteer help – from pulling a dog out of a shelter in Bakersfield and getting it to our vet in Anaheim, to conducting home visits in connection with Adoption Applications. The fabulous response we receive to these pleas never ceases to amaze us.” Donations can be made to Boston Buddies by check or via PayPal at contactus@bostonbuddies.org.

When Boston Buddies first began its efforts all of the dogs being helped were housed in private foster homes located throughout Southern California. In recent years the number of dogs in rescue with Boston Buddies at any one time has resulted in a lack of foster homes and Boston Buddies was forced to either turn away dogs in need or pay to board some of its rescue dogs when no foster homes were available.

The second largest expenditure of Boston Buddies (behind vet bills) is for boarding. In 2016 total boarding expenses were over $13,600 and total vet expenses were over $151,000. While monetary donations of any amount are most appreciated, a major need is more foster homes.

Finding qualified foster homes is never easy as we are asking people to take in dogs that we know very little about – we often don’t know if they are dog or cat friendly or whether they are housebroken or crate trained. We rely on our foster homes to let us know these things and we are forever indebted to each and every one of our foster homes – they are one of the most important parts of our rescue effort.

“While each year we wish for a time when groups such as Boston Buddies are no longer necessary and every animal has a loving and forever home, we will continue our efforts and remain committed to assisting as many Boston Terriers or Boston Terrier mixes in need as we possibly can,” a BB spokesperson said. “Our continued efforts would not be possible without the combined efforts of all involved: from the financial support of our donors to the courageous efforts of our tireless volunteers in the “rescue trenches” to the dedication of our fabulous foster homes and rescue friendly vets and boarding facilities to the commitment to doing the right thing by rescuing exhibited by our wonderful adoptive homes. We are eternally grateful to all involved in supporting our mission.”

Here’s a vote for getting out and doing your patriotic duty...