Behind the four outstanding junior sprinters from traditional power Long Beach Poly, the Lady Colts became the first CIF-Los Angeles City Section team to capture the state girls’ track and field crown since Granada Hills Kennedy did it in 1980.

Behind the four outstanding junior sprinters from traditional power Long Beach Poly, the Lady Colts became the first CIF-Los Angeles City Section team to capture the state girls’ track and field crown since Granada Hills Kennedy did it in 1980.

Carson began the meet with its 4×100-meter relay team winning the state crown with a United States national best time of 45.06 seconds. The team included Kenyla Miles, Autumn Wright, Kennedi Atkins and Kaela Roberts. The race was expected to be a showdown between the Colts and CIF-Southern Section champion Serra. The Lady Cavaliers’ squad of Madison Golden, Jasmin Reed, Jazmyne Frost and Kayla Pickens settled for a second place finish despite their season best time of 45.76.

Roberts continued to have a strong show. In the 400, Roberts recorded a national best time of 52.28 seconds to win the race handily. She ended up second behind Westlake Village Oaks Christian’s Lauren Rain Williams in the 200 at 23.4.

Behind Roberts, Miles and Wright, the Colts closed the girls’ side of the meet by winning the 4×400 relay clocking three minutes and 42.8 seconds.

In the field events, Carson was led by sophomore Jonon Young in the triple jump at 38 feet, 2.5 seconds for a seventh place.

The Cavalier boys had an outstanding performance from senior Isaia Diego-Williams. He took second in the 200, behind Vista Murrieta sensation Michael Norman, in 21.03. Norman, already an Olympic prospect, recorded a blazing time of 20.42 to run away with the race and easily won the 400 clocking 45.77. Williams placed fourth in the 100 at 10.6.

Over the summer, Loza moved over to North. Loza and the Saxons shut out the Tartars 5-0 for their third overall Southern Section title but their first since 2009 in their all-Torrance and Pioneer League final last Saturday at Deanna Manning Stadium in Irvine.

Loza limited the defending champion Tartars to just three hits, although she walked five batters over the first two innings. She began by walking three Torrance batters, two of them before North recorded the first out, but struck out Marissa Moreno to end the threat.

In the second inning, Bridgette Shaw started by reaching base on an error, before Loza walked two to load the bases. Loza, though, got out of that inning. From there, it was smooth sailing. She finished the game with four strikeouts.

The Saxons’ offense was led by Shonme Baker who hit a three-run home run in the bottom of the fifth.

After North was held hitless for the first three innings by Moreno, the Saxons scored two runs in the fourth, behind back-to-back singles by Baker and Veronica Garcia. Baker went on to score the Saxons’ first run on a wild pitch.

It just only two years after his defeating Ken Norton, Sr. in his final boxing match in 1978 that he was diagnosed with Parkinson’s Disease. Ali, though, continued to be heavily involved in numerous activities.

Ali was boxing since he was 12 years old. In the 1960 Olympics in Rome, Italy, he easily captured the gold medal and immediately went into his professional career. Ali would pull off some upsets but his big one was his knockout of Sonny Liston, the big power fighter of the early 1960’s, in 1965. That was back when Ali was still Cassius Clay. It was two years later, that Clay became a Muslim and changed his name to Mohammad Ali. Perhaps his dark period, was refusing to join the United States Army after being drafted that stripped him of one of his titles in 1967.

Throughout the late 1960’s and 1970’s, Ali went on to become the top boxer who became the first to capture three heavyweight championships. He was able to defeat the likes of others, including the late Joe Frazier, George Foreman and Norton.

Always remembered is Ali’s favorite saying, “I am the greatest.” Even today, many feel that Ali was the best boxer of all time. He definitely floated like a butterfly and stung like a bee. There was even a hit song in the radio about him and that description during the 1970’s.

Ali was an active Black Muslim who helped start some mosques. However, he resented the Muslim terrorists, such as Al Qaidi’s infamous 2001 attack on the World Trade Center in New York and the Pentagon in Washington, D.C. and more recent actions by ISIS. He lighted the Olympic torch to start the XXV Olympiad in 1996 in Atlanta.

He will be missed. He was a great boxer and personality. 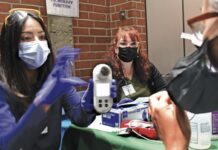 Elissa Estrada grateful to be a Gardena Police Explorer