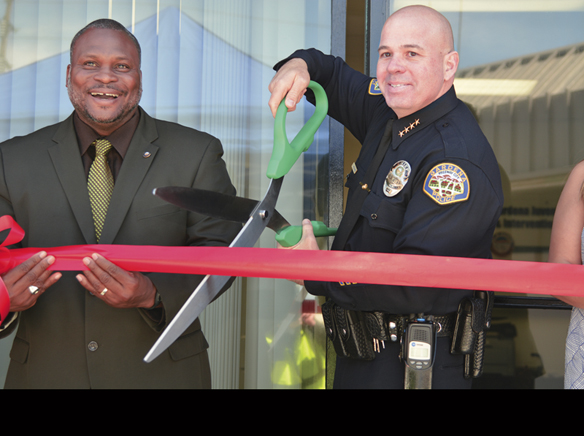 Gardena’s youthful offenders and at-risk kids have just been put on notice: Violate the law and face justice through the city’s new Juvenile Justice and Intervention Program (GJJIP).

The program was the brainchild of Gardena Police Chief Ed Medrano, who began monitoring the high number of kids being cited for misdemeanor and status offenses and realized that the situation needed addressing.

Gardena’s youthful offenders and at-risk kids have just been put on notice: Violate the law and face justice through the city’s new Juvenile Justice and Intervention Program (GJJIP).

The program was the brainchild of Gardena Police Chief Ed Medrano, who began monitoring the high number of kids being cited for misdemeanor and status offenses and realized that the situation needed addressing.

Location also needed addressing. Officials said that when the Kenyon Juvenile Justice Center in Los Angeles closed in June 2013, a lot of juvenile cases were redistributed all over the county, including to Van Nuys, where a majority of cases involving Gardena youth offenders were heard.

Medrano realized how far of a commute it was for local residents and how disconnected they felt from their community, which is what prompted him to create the program.

The chief said the program has two purposes: to provide an alternative to dealing with at-risk youth outside of the criminal justice system, which he said would prevent the youths from becoming repeat offenders.

And to provide a program where family members, school administrators, and police officers can refer kids so that they can get the support and guidance they need to make better life choices.

“Our kids are our future,” Medrano said. “And I just wanted an opportunity to have kids get services locally, so we designed the program to focus on the needs of Gardena youth, as well as kids who go to Gardena schools.”

Currently there are 32 open cases in the program with another 57 that are pending.

Medrano said the focus will be handling kids with misdemeanor or status offenses and will not handle felonies or gang affiliations. However, any officers or family members who see a child heading down the path toward gang membership is encouraged to refer that child to the GJJIP.

According to the GJJIP, youths aged 11 to 17 who have been cited by the Gardena Police Department are eligible for admission to the program. Also, youths exhibiting anti-social behaviors or attitudes, poor peer relationships, or who come from difficult home, school, or neighborhood environments are also eligible. Parents whose children don’t fit into the previous categories but who think their son or daughter could benefit from the program are also eligible.

Medrano said the program costs about 155,000 to $175,000 per year with funding for the program coming from a combination of sources such as grants, state money for law enforcement support, money from asset forfeitures, as well as money from the Gardena Police Foundation.

Once in the program, the juvenile is assessed to determine the likelihood of returning to criminal behavior upon release from the program and then offered several services that are provided to help steer the child away from a life of crime.

Nicki Ung, an administrative management analyst who works with Chief Medrano, said some of the services provided to juveniles in the program include restorative justice, an intervention service that allows offenders to understand how their actions have serious consequences.

According to Ung, restorative justice is a service model where youth offenders are paired with their victims so that they can gain an understanding of how their criminal actions had a negative impact on the victim. For example, a graffiti tagger would be paired up with the owner of the business he tagged. The owner would then tell how the act of tagging negative impact on his business in terms of fewer sales or a negative perception in the neighborhood.

To help the juveniles in their efforts to lead a more normal, crime-free life, the GJJIP is working with Gardena One Stop, a local employment center, to help the kids apply for, and gain employment for the summer.

Kimberly Reddy, case management supervisor for the GJJIP, said the program utilizes what are called evidence-based practices, which are methods proven through scientific research to be most effective with juveniles.

One of these practices is called Motivational Interviewing, which Reddy said is a person-centered counseling technique.

For example, if a youth has bad grades and was cited for truancy, but has a desire to go to college, a GJJIP counselor will make the connection by showing him how his grades will not allow him to achieve his goal.

“Then we say: well, your desire is to go to college so that will be your motivation to change these grades,” Reddy said.

Another evidence-based practice is called the Brief Solutions-Focused Approach, which is a treatment approach that focuses on goals. Reddy, who is a licensed clinical social worker, said that normally with a child who has bad grades, they would look at the history of the poor academic performance to see what events in the person’s life led up to the bad grades. But the approach taken by Reddy and the GJJIP is to focus only on the solutions. You identify the problem and then determine how to fix it.

Once juveniles have left the program, they are monitored using the Child and Adolescent Functioning Assessment Scale (CAFAS), a tool which Reddy said is used to assess day-to-day functioning and how the juveniles are improving over a period of time. If a child was in the program for six months, CAFAS would be used to monitor their progress in conjunction with talking to school administrators about the child’s academic progress.

Gardena City Councilman Mark Henderson said the program is a huge benefit to the city because it removes the burden of families having to travel so far out of their local area to get needed services.

He also likes the idea of being able to catch young offenders early, before they have an opportunity to commit more serious crimes.

Henderson believes that the program can serve as an example for other cities that would like to help youth offenders or other at-risk kids follow the law.

“I think as we prove the success of the program and the funding is sustained, I believe it will then be a model for other agencies in our region,” Henderson said. “I think there’s a lot of families that need this type of service throughout the south bay area and believe Gardena will be that model and it should be up to us to work to try to sustain it once it’s proven to be beneficial to the community.”

Because the program is still in its infancy, there will inevitably be “bugs” that must be worked out and smoothed over. Henderson said the oversight component would help with that process.

“I think as any new program starts, there’s always going to be some growing pains but once those get worked out through the process and as it gets evaluated quarterly or annually or biannually we figure out where we can grow in some areas and fix those areas that need fixing if there are any.”

Food for good: Making sure kids get the nutrition they need...