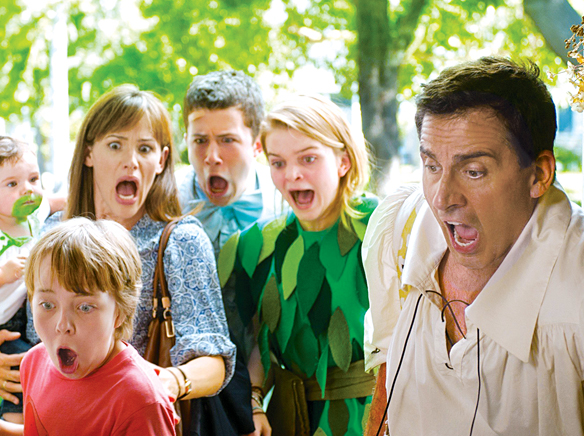 Disney’s “Alexander and the Terrible, Horrible, No Good, Very Bad Day,” based on a children’s book by Judith Viorst,  is a well crafted comedy that will tickle the funny bones of young and old alike.

Viorst’s book, published in the ‘70s, was only 32-pages long, so the filmmakers have expanded the story, using the picture book as the first act of the film.  This is followed  by a completely original storyline that takes place the very next day after 11-year-old Alexander‘s truly miserable day.

Disney’s “Alexander and the Terrible, Horrible, No Good, Very Bad Day,” based on a children’s book by Judith Viorst,  is a well crafted comedy that will tickle the funny bones of young and old alike.

Viorst’s book, published in the ‘70s, was only 32-pages long, so the filmmakers have expanded the story, using the picture book as the first act of the film.  This is followed  by a completely original storyline that takes place the very next day after 11-year-old Alexander‘s truly miserable day.

According to the director, Miguel Arteta, “We wanted to show a family having a truly awful impossible day.  All things are going wrong and yet they come together and have each other’s backs.  The ability to roll with and laugh sees them through.”

As the story begins just about everything awful happens to Alexander (13-year-old Australian native Ed Oxenbould).  First he gets gum stuck in his hair.  Then when he arrives at school things go from bad to absolutely horrible.  He tries to explain his terrible day to his upbeat family but they always focus on the bright side of life.

All of them, especially dad (Steve Carell “Little Miss Sunshine” and TVs “The Office”)  tell him things will get better. No one seems to understand.  Frustrated, Alexander wishes that just once they could know what his life was really like.  The next day his wish actually comes true when the most awful, horrible things happen to the entire family.

What is such great fun in this warm, funny family film is the way the family’s bad day is even more horrible than Alexander’s was.   The filmmakers have expanded the still popular, but very short children’s book by Viorst, as they envision yet another truly horrible bad day that now involves the entire family.

Steve Carell is endearing as the out of work dad with fabulous engineering credentials who is looking for a new job and career.  In the meantime he has become a stay at home dad  becoming what the other Mom’s call a “Famie” (father-mommy) to his baby son.

The misadventures throughout the film are truly laugh inducing.  In fact this is the funniest comedy I’ve seen all year.  This delightful movie with the super long title is super fun for the entire family.  You may want to encourage the youngsters to read the book prior to seeing the movie.  From Disney, rated PG.

After the screening at the El Capitan Theater on Hollywood Blvd. my husband and I decided to check out the theater’s Ghirardelli Ice Cream Parlor.  I ordered the scrumptious looking banana split with chocolate, strawberry and vanilla ice cream topped with sauces and whipped cream and it was great.

My husband opted for the butterscotch hot fudge sundae made with pecan ice cream smothered with butterscotch and golden almond nuggets and topped with whipped cream, chopped almonds and a cherry.

I felt like a kid again because it’s been years since I’ve had a super banana split at an old-fashioned ice cream parlor.  This was an added treat.  The Ghiradelli Ice Cream Parlor also provides filmgoers the chance to buy all kinds of Disney goodies like toys, DVDs and Disney character pins.  You can also trade Disney pins with the folks who work in the shop.

While we were enjoying our ice cream delights I asked the three young boys at the table next to us how they enjoyed “Alexander‘s Terrible, Horrible, Very Bad Day.”  They immediately replied, “awesome, funny and cool.”  And indeed it was.

On Oct. 7,  Disney’s fairytale classic “Sleeping Beauty” will be brought back to life for the first time on Diamond Edition Blu-ray +DVD + Digital HD.  For a limited time only you and your family can experience this fairy tale classic about a beautiful young princess who is cursed by the evil fairy Maleficent.

She is aided during the curse by three good fairies who protect her until true love’s kiss can awaken her from her slumber.

The Academy Award nominated score was adapted from the incandescent music of Peter Tchaikovsky’s “Sleeping Beauty” ballet. The diamond edition DVD also has over two hours of enchanting bonus material that includes never before seen deleted scenes, a sing-a-long feature and much, much more.

Also on Oct. 7, Disney will release “Million Dollar Arm,“ starring Jon Hamm.  This involving baseball tale is based on a true story and is rated PG.