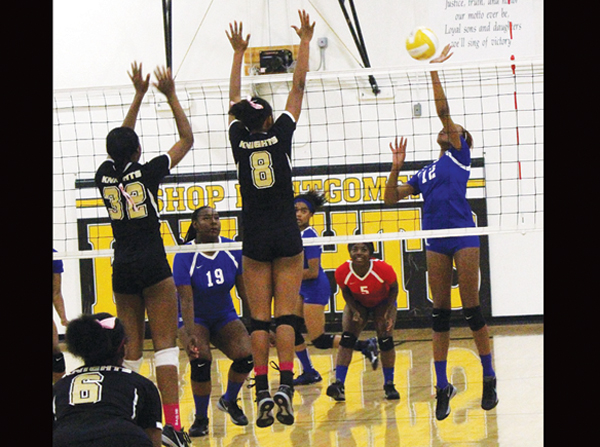 The Knights, who improved to 5-0 in league and 14-6 overall, dominated most of the match, although the Cavaliers, who are 1-4 in Del Rey action and 6-12 overall, were able to compete well against them.

Early in the third set, Serra was tied with Bishop Montgomery at six after a hitting error by the Knights’ opposite hitter Lauren Hubbard.

The Knights, who improved to 5-0 in league and 14-6 overall, dominated most of the match, although the Cavaliers, who are 1-4 in Del Rey action and 6-12 overall, were able to compete well against them.

Early in the third set, Serra was tied with Bishop Montgomery at six after a hitting error by the Knights’ opposite hitter Lauren Hubbard.

The Knights led for good when opposite hitter Jasmin Cortez recorded a successful kill that fell off the hands of the Cavaliers’ Zandra Clemons.

A kill from Taylor Gentry got Serra within two points at 10-8 but that was as close as what the Cavaliers to get. A 5-1 run from Bishop gave the Knights a 15-9 lead.

The Cavaliers crept within three points (18-15) on Autumn Hunt’s kill but Bishop proved too much for them as it pulled away. The Knights clinched the match on a kill from Julian Miranda.

Serra will play its final home match of the regular season against St. Joseph from Lakewood tonight at 6 p.m. It will be Senior Night. The Cavaliers close league at La Salle in Pasadena next Tuesday at the same time.

Bishop Montgomery had a key match at second place St. Joseph in Lakewood last Tuesday before coming home to face La Salle tonight at 6 p.m. The Knights close league at Bishop Amat next Tuesday at the same time.

Betiku committed to playing for the Bruins, head coached by Jim Mora, in August but a visit to College Station saw him more interested in several other colleges So far, Betiku, a five-star recruit who is ranked among the top defensive ends in the United States, has interests in Texas A&M, Penn State, Florida State and Notre Dame. Sources appear that Betiku is leaning toward Texas A&M.

The Nigerian immigrant spent his first two years of high school in Maryland before moving to Gardena and transferring to Serra at the start of the 2014-15 school year. He was a key to the Cavaliers’ tri-Mission League championship with La Puente Bishop Amat and Encino Crespi with a 5-1 league record and 8-3 overall mark. Serra, which lost the coin flip to the winning Lancers and runner-up Celtics, went on to lose a wild 68-64 game to host and eventual CIF-Southern Section PAC Five champion Centennial High of Corona in the first round of the playoffs.

This season, Betiku continues to be a big factor for the Cavaliers’ defense, recording more than 70 tackles in the first eight games. Serra is currently in first place in Mission play at 4-0 and is 7-1 overall heading into Friday’s home league game against Mission Hills Alemany, beginning at 7 p.m. Last week, Serra had a bye that followed a 33-7 win over Crespi from Oct. 16 at Serra. In a big showdown on Oct. 9, the Cavaliers, behind dominating option quarterback Khalil Tate, outlasted Bishop Amat 41-38 at Serra.

Hernandez was back in the lineup for the first time in four weeks after being out with an injury. Hernandez, who keyed the Saxons into the CIF-Southern Section Northwest Division finals before losing to Ojai Nordhoff three years ago, passed for 161 yards and two TD’s and ran for another.

Down by 11 midway in the second quarter, El Camino, which improved to 3-4 overall and 2-1 in the Mission Conference Northern Division, faked a short 23-yard field goal attempt. With backup quarterback Blaise Booth as the holder, he took the snap and threw a 13-yard touchdown pass to a wide open receiver Colin Hindle that reduced Harbor’s lead to 17-13.

That began a three-TD spurge, two of those in the final four minutes of the first half. Hernandez gave the Warriors the lead for good on a 2-yard scoring run, then found Dajuan Parham from 13 yards out with 58 seconds left.

El Camino added another touchdown in the second half to put the game away and picked up its third win of the season.

The Seahawks, who fell to 0-7 overall and 0-3 in conference, took an early 10-0 lead on a 72-yard touchdown pass from quarterback Clark Livingston to wide receiver Nick Karasseboom.

The Warriors cut Harbor’s lead to 10-6 when Hernandez tossed a 13-yard TD pass to Sean Luna but Harbor brought its lead to 17-6 after Livingston ran an option play before passing a short pass to Karsseboom who ran 47 yards to the ECC 15-yard line. From there, Livingston completed a 15-yarder to Kyeree Wallace for the score.

Defensively, ECC was led by Tahiela Lolohea and Lewitt Savini who combined for 16 tackles, including 3.5 for losses. Both were also responsible for a late fourth quarter quarterback sack on Livingston.

Prior to the loss earlier last week, the Seahawks received bad news when they had to forfeit two wins after one of their players was ruled ineligible. Harbor is 2-5 overall and 1-2 on the field.

El Camino will host Chaffey College from Rancho Cucamonga in a Halloween Classic Saturday at 5 p.m. at Redondo High.

After the Colts won three consecutive games that followed losing their first four games, they were faced with a very stiff challenge against the Gauchos, who won the CIF-Los Angeles City Division I championship with a win over Carson last year and are favored to repeat this season.

It was University of Arizona-bound Riley that keyed Narbonne to its biggest blowout win ever at 58-7 over its rival Colts, who are mostly young with little experience this year.

Barely after the start of the game, Riley quickly got things started with a 67-yard touchdown run. He added a 55-yard TD run later in the first quarter that saw the Gauchos (6-2 overall and 3-0 in league) surge to a 29-0 lead and Carson had no answer.

Riley finished the game rushing for 194 yards and two touchdowns on just six carries. That is an average of 32.3 yards per carry.

Narbonne showed its outstanding depth in all phases, including its special teams. The Gauchos added two TD’s on punt returns by De Vaughn Cooper from 74 yards and Cedric Byrd of 50 yards. Cooper also caught a 30-yard pass from third-year starting quarterback Roman Ale from 30 yards out that gave Narbonne a 21-0 lead with 4:04 left in the first period.

Deyshawn Littleton had kickoff returns of 63 and 42 yards.

For Narbonne, Joseph Torres and Ari Harris each recorded an interception.

Next for Narbonne will be a home game against Wilmington Banning Friday at 7 p.m. The Pilots are coming off a 52-28 home win against Washington last Friday.

The Panthers had just 86 total offensive yards against the Pirates.

Gardena will have its hopes on a CIF-L.A. City Section Division II playoff spot as it visits Washington Prep High Friday at 7 p.m. Each are 0-3 in the rugged Marine League as the Generals fell to host Banning 52-28 last Friday.

The Panthers (3-5 overall) lost their fifth consecutive game after opening the season at 3-0.

Option quarterback Mique Juarez continued to dominate as he passed for three touchdowns and ran for four in the Saxons’ (7-1, 3-0) easy win over the hapless Tartars (0-8, 0-3).

The Tartars hope to pick up their first victory as they host Centennial High from Compton at the same time.

West breezes past Centennial: West Torrance High’s football team improved to 4-4 overall and 2-1 in the Pioneer League with a 42-12 win at Centennial High last Friday in Compton.