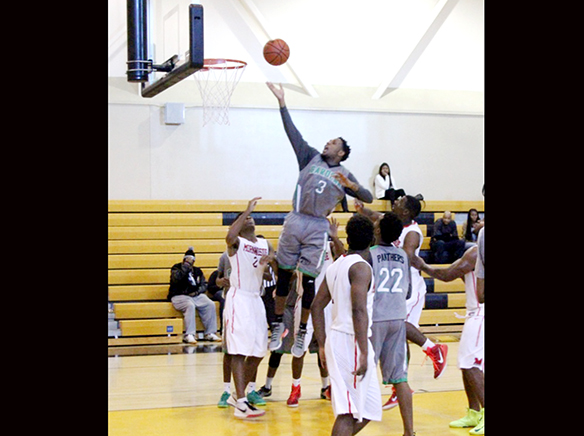 Gardena High’s boys’ basketball team did not do what it wished to by splitting four games to place ninth in the San Pedro Pirate Shootout Classic last week.

Gardena High’s boys’ basketball team did not do what it wished to by splitting four games to place ninth in the San Pedro Pirate Shootout Classic last week.

The Panthers, who are 10-4 overall, began the classic with a 66-49 loss to Executive Prep Academy of Finance from Hawthorne on Dec. 26. Gardena bounced back to defeat South Tahoe 65-51 on Dec. 28. A day later, Gardena played a very good Morningside team but fell on the short end of a 65-62 score. With a 1-2 pool record, the Panthers ended up playing in the ninth place game against Locke and won handily 60-34 on Dec. 30.

Against the Saints from southeast Los Angeles, Gardena had little trouble as it surged out to a 32-12 halftime lead.

Against Morningside from Inglewood, which went on to capture the tournament title with a 60-57 overtime win over Bay League foe Rolling Hills Estates Peninsula on Dec. 30, Gardena trailed 15-5 after the first quarter but came back to grab a brief 62-61 lead. The Panthers, however, committed two critical fouls as the Monarchs (10-3) made all four free throws and held Gardena scoreless for their three-point win.

Morningside was led by Charles Akanno with a game-high 20 points.

In Gardena’s second game of the tournament, the Panthers were able to handle an improved South Tahoe squad that came down from the Northern Sierra Nevada Mountain town on the California-Nevada border.

Gardena is currently playing in the Granada Hills Kennedy Pre-league Round Robin Invitational where it opened last Monday against Chatsworth. The Panthers close out the invitational against Grant High from Van Nuys today at 4 p.m.

O’ Gorman jumped out to a 17-10 first quarter lead, but Serra came back with an 18-11 second period to tie the game at 28 at halftime. The two teams continued to stay tied at 45 after three quarters before O’ Gorman outscored the Cavaliers 21-16 in the final period.

Against Mission Hills, Serra took a 26-22 halftime lead in the mostly close contest. The Cavaliers extended the advantage to seven (37-30) by halftime, then held on.

La Jolla Country Day surged out to a 21-8 first quarter lead, then led 35-18 at halftime. The Cavaliers cut Country Day’s lead to nine (43-34) after three quarters but Country Day put the game away.

Serra has a pair of tough non-league games this week. After visiting Etiwanda Wednesday, the Lady Cavaliers travel to Sierra Canyon in Chatsworth to face the host squad at noon.

Serra gets routed by North in fifth place game

After edging St. Mary’s High from Phoenix, Ariz. 56-55 on Dec. 26, the Cavaliers fell short of Etiwanda, last year’s CIF-Southern Section Open Division runner-up to Torrance Bishop Montgomery, 56-50 on Dec. 28. Serra came back to slip past Franklin High from Portland, Ore. 56-54 on Dec. 29. The Cavaliers, though, could not handle J.W. North High from Riverside as they were routed 81-45.

The Nike Division is the second strongest division behind the more prestigious Open, which was won by the United States’ No. 1 ranked team in Chino Hills which downed Redondo 96-80 last Saturday. The Huskies (14-0) were led by Lonzo Ball with 33 points and 12 assists.

The Sea Hawks, who are 11-3 after topping Santa Margarita 72-65 in their own Jordan Brand Take Flight Classic last Saturday at Redondo, were led by Chris Williams and Leland Green with 16 points, apiece against Chino Hills.

During the week before Christmas, Serra played in the Mission Prep Tournament in San Luis Obispo where it ended up in 11th with a 2-2 record. The Cavaliers began with a 65-62 loss to Troy High from Fullerton on Dec. 19. Coming back two days later, Serra defeated Windward High from Mar Vista 63-58. On Dec. 22, the Cavaliers fell short of Dorsey 56-51, then in the 11th place final on Dec. 23, Serra rolled over Weston from Cypress Bay, Fla. 71-42.

The young Cavaliers are led by Mason Chipley, Ray Knight, Jr., along with freshmen Doctor Bradley and E.J. Jordan.

Bishop Montgomery went on to capture the Division I Bound Southern California Tournament, held from Dec. 26-30 at Dorsey High. The Knights began by crushing Trinity Classical Academy of Valencia 80-25 on Dec. 26, defeating the host Dons 75-62 on Dec. 28, rolling over Valencia West Ranch 86-40 on Dec. 29 before easily winning the title over Calabasas 73-38 on Dec. 30.

The two teams will square off at Serra next Wednesday at 5 p.m.

The Cavaliers also host their own classic on Saturday where they face Diamond Ranch High from Pomona at 6 p.m.

With no National Football League team in the Los Angeles area, at least as of yet, L.A. fans have to settle to follow the two NCAA Major Division I college teams in UCLA or University of Southern California.

The PAC 12 was doing well in the Bowl games but the Bruins ended their season at 8-5 after falling to a now 6-7 University of Nebraska squad 37-29 in the Foster’s Farms Bowl on Dec. 26 at Levi’s Stadium in Santa Clara.

UCLA started out well taking a 21-7 lead midway in the second quarter but the Cornhuskers took advantage of an inexperienced Bruin defensive line, which was plagued with several major injuries including an earlier season ending one to Myles Jack, to score 30 unanswered points enroute to the win. Since the key injuries, the Bruins’ defense struggled against the run and Nebraska, as a team, rushed for 326 yards to just 67 for UCLA. Bruin quarterback Josh Rosen threw for 319 yards and three TD’s but was intercepted twice and sacked four times.

USC, with several ex-Serra High standouts, saw Cody Kessler’s pass to the end zone intercepted late in the game and the Trojans ended their season at 8-6.

Last Saturday, University of Oregon was stunned when it blew a 31-0 halftime lead in a 47-41 triple overtime loss to Texas Christian University in the Alamo Bowl in San Antonio, Texas. In the Cactus Bowl at Bank One Stadium, home of the Major League Baseball Arizona Diamondbacks in Phoenix, Arizona State lost a wild see-saw game to West Virginia University 43-42.

Stanford won the Rose Bowl by routing University of Iowa 45-16 on New Year’s Day in Pasadena.

Juarez, who de-committed from University of Southern California after the firing of head coach Steve Sarkesian in November, started at quarterback and linebacker. He had 3,028 total offensive yards that included completing 122 of 239 passes for 1,658 yards and 23 touchdowns, and rushed for 1,370 yards and a school record 36 TD’s.

Defensively at linebacker, the 6-foot-3, 220-pound senior had 146 tackles, including 91 solo. He had 21 tackles for losses and had a school record 397 yards in his four years at North.

He keyed the Saxons to a co-Pioneer League title with cross town rival West Torrance, but North got the better end of the league crown with a 35-17 win over the host Warriors, who won the Pioneer and made the CIF-Southern Section Western Division semifinals a year earlier, on Oct. 16. North advanced to the Western Division quarterfinals where it lost to host Mira Costa 35-21 on Nov. 20 in Manhattan Beach.

Serra swept the Offensive and Defensive Players of the Year. The Cavaliers dominating quarterback Khalil Tate was top offensive player. Tate, a senior headed to University of Arizona, had 4,166 total offensive yards that included 2,130 yards and 26 touchdowns rushing and 2,036 yards and 17 TD’s passing.

Tate keyed Serra to the better part of the Mission League co-championship with La Puente Bishop Amat (The Cavaliers topped the Lancers 41-38 on Oct. 16 at Serra.) and the quarterfinals of the prestigious CIF-Southern Section PAC Five Division quarterfinals where it fell short of Santa Ana Mater Dei 28-27 on Nov. 20 at Serra.

Defensive end Oluwole Betiku, who will be playing next fall at University of Southern California shortly after de-committing at UCLA, was top defensive player. The 6-foot-4, 250-pound senior had 70 tackles, including 17 quarterback sacks.

The Cavaliers begin the Camino Real League at home against Bosco Tech from Rosemead next Tuesday at 5 p.m.

Public Forum on Fireworks in Gardena