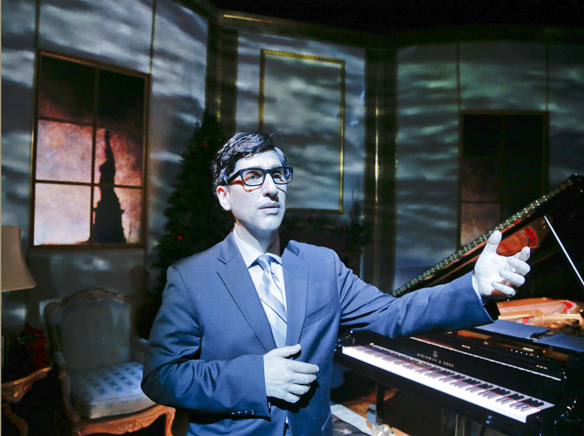 Hershey Felder, an amazing actor, pianist, composer and writer, is a one-man band when it comes to bringing great composers to life on stage. I first saw him as  Gershwin in “Gershwin Alone.” He not only personified the musical genius, he gave voice to the people in Gershwin’s life in a seamless fashion. He also played and sang many of the songs created by George and his brother Ira, ending the evening with a rousing performance of ”Rhapsody in Blue.”

Hershey Felder, an amazing actor, pianist, composer and writer, is a one-man band when it comes to bringing great composers to life on stage. I first saw him as  Gershwin in “Gershwin Alone.” He not only personified the musical genius, he gave voice to the people in Gershwin’s life in a seamless fashion. He also played and sang many of the songs created by George and his brother Ira, ending the evening with a rousing performance of ”Rhapsody in Blue.”

Felder then went on to write and create musical portraits of great classical composers ranging from Frederic Chopin and Beethoven to Franz Liszt as well as a musical biography celebrating the life of noted conductor Leonard Bernstein who composed the music for “Candide” and “West Side Story.”

Now Felder’s latest work, the remarkable story of Irving Berlin, is making its world premiere in the Gil Cates Theater at the Geffen Playhouse. This is a fitting tribute to the theater’s late founder, Gil Cates who met Felder in 1997 and suggested he develop a piece devoted to Irving Berlin. Felder wrote several shows in celebration of world famous classical composers, but Cates suggestion intrigued him and remained in the back of his mind.

Cates presented Felder’s new classical works at the Geffen, but continued to urge him to write about Berlin, a remarkable man of music who lived for 101 years and composed hundreds of hits ranging from the patriotic anthem “God Bless America” to “Puttin’ on the Ritz” which Mel Brooks used in his Broadway hit comedy “The Producers.”

Berlin wrote 232 top-10 hits and 25 No. 1 songs ranging from “Alexander’s Ragtime Band” to  romantic ballads like “Always,” “What’ll I Do” and“ “Blue Skies.”  He also penned “There’s No Business Like Show Business” and traditional  holiday favorites like “White Christmas” and “Easter Parade” that are still popular today. As noted composer Jerome Kern famously said, “Irving Berlin has no place in American music–he is American music.”

In “Hershey Felder As Irving Berlin,” Felder tells us the remarkable story of the Russian immigrant who fled from the depths of anti-Semitism in Czarist Russia to New York’s Lower East Side with his family. His love of music came from his father, a cantor. After his father’s untimely death, the young Berlin went out on his own. He became a waiter and began his musical career writing funny little ditties to promote the restaurant where he worked. And as the old saying goes, the rest is history.

Felder’s latest musical biography  is all about this amazing immigrant who overcame countless obstacles in pursuit of his American dream. Fortunately his music and lyrics still have the power to make us laugh, feel patriotic or truly romantic. A personal favorite, “Always” was dedicated to his wife Ellen. The melody is beautiful and the lyrics are filled with undying love…”I’ll be loving you—always, with a love that’s true always… not for just an hour, not for just day, not for just a year but always.” And their love affair and marriage endured for 62 years, which is about as close to “Always” as any couple can get.

Felder, as Berlin, allowed the audience to sing along with him from time to time because he told us “ this music was written for you.” And the appreciative audience did a wonderful job.

A ticket to “Hershey Felder as Irving Berlin” at the Geffen is a great holiday gift idea for anyone  who loves a beautiful song and a story about making dreams come true. Even though Berlin wrote music for Fred Astaire movies and the Ziegfeld Follies long ago, his melodies still linger on in the 21st century and hopefully Americans of all ages will continue to sing his songs—“Always.“

“Hershey Felder As Irving Berlin,“  at the Geffen Playhouse, 10886 Le Conte Ave., has been extended through Dec. 21 due to popular demand. Tickets are available in person at the theatre box office, via phone at (310) 208-5454 or online at www.geffenplayhouse.com.

On Dec. 2 the Stephen Sondheim fairytale “Into the Woods” comes to the Wallis Annenberg Center for the Performing Arts and runs through Dec. 21. The Center will also present “Love, Noel: The Letters and Songs of Noel Coward” from Dec. 5-21 on its second stage. The show, staring Harry Groener and Emily Bergl, is back by popular demand. Come and enjoy an evening of intimate, sophisticated comedy. For tickets and information, call 310-746-4000 or online at thewallis.org.

The Pantages in Hollywood has had a fabulous season, starting with such hits as “Jersey Boys,” “Pippin” and “Kinky Boots.”  Next, just in time for the holidays, comes the wonderfully wicked musical “Wicked”—the perfect gift for your daughters and for the whole family as well. In the new year the Pantages will present “Newsies” followed by “Motown” and the fabulous Andrew Lloyd Webber smash hit musical, “Phantom of the Opera.” For tickets and info go to HollywoodPantages.com.

For Old World holiday wonder, check out the New Year’s Concert “Salute to Vienna” where you can celebrate the new year with Strauss waltzes and operetta arias, featuring European singers, dancers and a full orchestra. At the Music Center’s Walt Disney Concert Hall. For tickets, call 1-800-745-3000.

OUT OF LEFT FIELD: An Olympic task with a...

Here’s a vote for getting out and doing your patriotic duty...