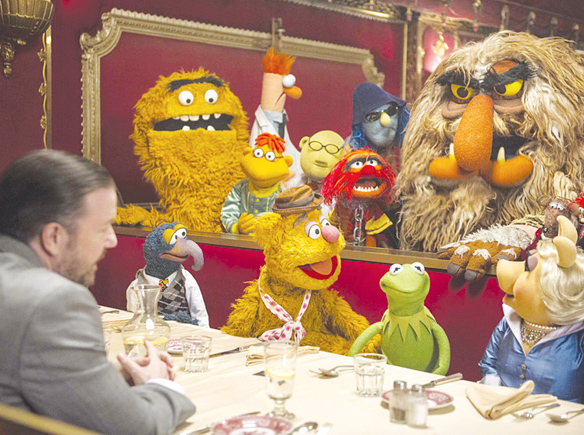 In 2011 the Muppets appeared in a film written by and starring Jason Segel (TV's "How I Met your Mother"). In the movie, entitled "The Muppets," Kermit searches for all of his Muppet pals, hoping to revive their stage careers.

In 2011 the Muppets appeared in a film written by and starring Jason Segel (TV's "How I Met your Mother"). In the movie, entitled "The Muppets," Kermit searches for all of his Muppet pals, hoping to revive their stage careers.

In their newest flick, "Muppets Most Wanted," they are back together again in Hollywood. They have completed the film described above and kick off their new adventure dressed in snazzy white Chorus Line costumes, complete with white top hats. Their opening number is a tuneful show stopper. Now the big question on their collective minds is–what will they do next?

The answer comes in the form of Dominic Badguy, (Ricky Gervais) who pronounces his name Bad-gee, telling the Muppets his name is French. He has come to serve as their manager on a whirlwind stage tour throughout Europe. Kermit is skeptical, but all the other Muppets convince Kermit that the tour is a great idea.

Little do they know that Badguy is literally a bad guy,  partnered with the evil criminal Constantine, a Russian frog currently incarcerated in a Siberian gulag. Constantine, a dead ringer for Kermit if Kermit had a big black beauty mark on his green face and a Russian accent, has plans to escape from Siberia and he does.

He then frames Kermit by gluing a black beauty mark on Kermit's face. Now our hero resembles the wanted posters. He is quickly captured and sent to Siberia in Constantine's place. Kermit is confident the other Muppets will realize he is missing and come for him, but only one Muppet suspects that something is wrong–and it isn't Miss Piggy.

At this point the crime spree begins as Badguy and Constantine start robbing art museums in search of a hidden treasure. Meanwhile Kermit, now sporting a black spot on his face, is stuck in a Siberian gulag run by Comrade Nadya (Tina Fey).  Determined to put on a Broadway-like show for her fellow guards, Nadja tells Kermit he must create a show, direct it and use his fellow inmates.

He can't convince her that he is not Constantine, but at least she is calling him Kermit now and it is obvious she is smitten with the talented little frog. Using the talents of fellow prisoners like Ray Liotta and Danny Trejo, Kermit does what he is told to do and the results are hilarious. This part of the movie alone is worth the price of admission. Soon Nadja, like Piggy, has fallen madly in love with Kermit. As Kermit has often lamented, "it's not easy being green," especially in Siberia.

Meanwhile Constantine, who has put green makeup over his black beauty mark, is robbing great art museums all over Europe with the help of his number two cohort Badguy. It sounds complicated but who cares. It all makes sense in the end and the journey is lots of fun.

Ty Burrell (TV's "Modern Family") adds a lot of comedic flair as a Paris Inspector who resembles the inept Inspector Clouseau of "Pink Panther" fame. He is teamed up with a CIA agent, a Muppet Eagle with a bigger badge than Burrell's.

Soon their inflated egos clash as they try to solve the crimes being committed along the Muppet Tour route. Their comic interplay is perfect for adults and kids in the audience.

This lively Muppet confection has romance, comedy, crime capers, double crosses, mistaken identity, musical numbers plus cameo appearances by Lady Gaga, Christoph Waltz, Usher, Celine Dion (who duets with Piggy), Tony Bennett and one of the noble inhabitants from TV's "Downton Abbey."  And who is that singing deep inside a gulag dungeon?

Disney's "Muppets Most Wanted" is rated PG for some mild action.

Note: The El Capitan Theatre in Hollywood presents "The Muppets Most Wanted" with a live stage show featuring the talents of Kermit and Miss Piggy. Following the stage show you can enjoy an extensive display of Muppet props and costumes including Animal's drum set and Miss Piggy's wardrobe and wedding gown.

Disney's "The Pirate Fairy" set sail on April 1and is a clever Blu-ray and DVD romp for this holiday season. The characters are inspired by the tale of "Peter Pan."

In this new adventure Zarnina (voice of Christina Hendricks) is a smart, ambitious dust-keeper fairy who is captivated by Blue Pixie Dust and its endless possibilities. Unfortunately Zarina's wild ideas get her into trouble and she flees Pixie Hollow to join forces with the scheming pirates of Skull Rock who make her the captain of their ship. Tinker Bell (voice of Mae Whitman) and her friends must try to find Zarina, but they have to go sword-to-sword with the band of pirates led by a cabin boy names James (voice of Tom Hiddleston) who will soon be known as Captain Hook.

The Blu-ray has many bonus features that include "The Second Star to the Right: The Legacy of Never Land" which explores Never Land's history, plus deleted scenes as well as the humorous "Croc-u-mentary."

You also get to go behind the scenes with Tom Hiddleston for a close up look at  the recording of the song "The Frigate That Flies." Rated G.

Warbirds are grounded in man’s violent history (The Long View)