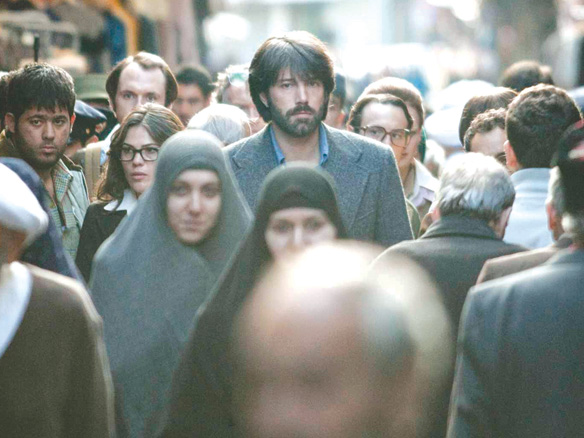 Nine 2012 films were nominated in the Best Picture category, but only five directors made the cut.  While “Argo” was nominated, director Ben Affleck was not.  However, this nominating slight didn’t stop “Argo” from winning Best Picture after all, proving that the thrilling true life adventure was the little movie that could—and did.

Overcoming against all odds is also the underlying theme of this true-life adventure film.

Nine 2012 films were nominated in the Best Picture category, but only five directors made the cut.  While “Argo” was nominated, director Ben Affleck was not.  However, this nominating slight didn’t stop “Argo” from winning Best Picture after all, proving that the thrilling true life adventure was the little movie that could—and did.

Overcoming against all odds is also the underlying theme of this true-life adventure film.

In 1979 American hostages were taken prisoner in Iran and held in captivity for 444 days.  The story of “Argo” deals with an additional small group of Americans who managed to escape from the Embassy and find sanctuary with the Canadian Ambassador and his family.

But it is just a matter of time before they will be discovered and if and when that happens they will be imprisoned like all the other Americans or worse yet, killed.

CIA agent Tony Mendez, played in the film by Affleck, devises a plan to get the Americans out.  At first the CIA finds his idea unworkable, but eventually they decide that his plan is so bizarre it might actually work. And as crazy as it seemed,  it was better than any of the government devised escape scenarios.

Mendez scheme was to go into Iran under the pretense of making a Hollywood film there.  Affleck would pose as the director and the Americans would be his film crew with fake names, identities and fake passports.

Affleck‘s “Argo” is a nail biter, and even though you know how it will eventually end you find yourself riveted on the edge of your seat as Affleck, the folks back in Hollywood serving as the producers (Alan Arkin and John Goodman) create a bogus film project with a script entitled “Argo” and plenty of coverage in the Hollywood trade papers.

When this background preparation is achieved, the really hard part of their plot begins.  Will the Americans be able to assume false identities and play their roles as film folk without panicking while out scouting locations surrounded by Iranians?

Arkin and Goodman’s characters poke lots of fun at Hollywood film making throughout which adds humor to relieve the anxiety of the plot.  Arkin, knowing it is a bogus movie, is still determined to make the concept a great one since his name and reputation are attached to this sci-fi film to be set in Iran if all goes according to plan.

The combo pack, Blu-ray + DVD + Ultraviolet is packed with additional features like the “Eyewitness Account” where the chaos of revolutionary Iran comes to life with survivor’s stories. And in “Rescued From Tehran: We Were There,” President Jimmy Carter, Tony Mendez and the actual houseguests of the Canadians recount the real-life harrowing experiences they endured.

Another feature takes a look at the risks the Canadians took in order to shelter their closes neighbors.  There is also feature-length commentary and much more.  From Warner Bros, rated R for language and some violent images.

Another nice touch, Ben Affleck dedicates the film to his wife Jennifer and to their children.  Affleck is a winner in more ways than one.

Other Oscar winners now on DVD include “Brave” from Disney.Pixar which took home the Oscar for Best Animated Film and  “Searching for Sugar Man,” Best Documentary Feature, which tells the celebrated true story of musician Rodriguez who is considered “the greatest ’70s rock icon who never was.”

Rodriguez was discovered in a Detroit bar in the late 1960s by two celebrated producers who were struck by his soulful melodies and prophetic lyrics.  They recorded an album, which was expected to secure his reputation as the greatest recording artist of his generation, but in contrast, the album bombed and Rodriguez disappeared into obscurity amid rumors of a gruesome on-stage suicide.  Nonetheless, a bootleg recording found its way into apartheid South Africa and over the next two decades his music became a phenomenon and an anthem for the people.

The film follows two South African fans setting out to discover what really happened to their hero, leading them to a story more extraordinary than any of the existing myths about the artist known as Rodriguez.

Special additional features include commentary with the director and musician Rodriguez, “The Making of Sugar Man”  and more.  From Sony Pictures Home Entertainment, rated PG-13.