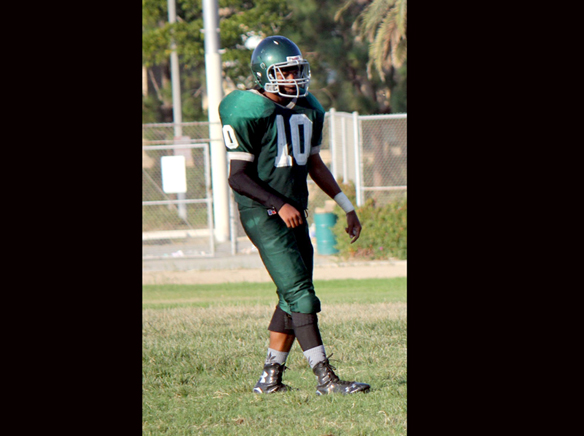 All-purpose quarterback Khalil Tate continued to dominate opponents as Serra High’s football team upped its Mission League record to 4-0 by cruising to a 33-7 win over Crespi in the Cavaliers’ homecoming game last Friday.

Tate totaled 252 yards that included 142 yards passing and 110 rushing. He scored two touchdowns on runs of eight and 25 yards and those came in the first quarter in just 29 seconds.

Tate also had one TD pass of 22 yards to wide receiver Merlin Robertson that gave Serra a 19-0 lead early in the second period.

All-purpose quarterback Khalil Tate continued to dominate opponents as Serra High’s football team upped its Mission League record to 4-0 by cruising to a 33-7 win over Crespi in the Cavaliers’ homecoming game last Friday.

Tate totaled 252 yards that included 142 yards passing and 110 rushing. He scored two touchdowns on runs of eight and 25 yards and those came in the first quarter in just 29 seconds.

Tate also had one TD pass of 22 yards to wide receiver Merlin Robertson that gave Serra a 19-0 lead early in the second period.

The score remained the same until the Cavaliers, who improved to 6-1 overall, added two touchdowns in the fourth quarter. Anthony Torres scored on a 10-yard run and backup quarterback Jalani Easton, who started in place of Tate who was suspended in Serra’s Honor Bowl non-league game against Corona Centennial (The Cavaliers lost that game to the Huskies 52-13 at Oceanside High on Sept. 5.), added a 28-yard TD run.

The Celtics, who fell to 0-4 in Mission play and 1-6 overall, scored late in the final quarter on a one-yard run by Miles Anderson.

Serra has a bye this week before hosting Alemany from Mission Hills (2-2 in league after losing last Friday to Bishop Amat) on Oct. 30 at 7 p.m.

McDaniel has been a very good all-purpose player who scored a team-leading six touchdowns in seven games and has more than 500 offensive yards. As a safety, McDaniel had 45 tackles and two interceptions.

In Gardena’s 51-13 league opening loss to host Carson on Oct. 9, McDaniel scored on a 97-yard kickoff return. He is averaging 45 yards on kickoff and punt returns.

Last Friday at Gardena, the Panthers found CIF-Los Angles City Section Division I power Narbonne way too much to handle in a 64-6 loss. McDaniel scored the Panthers’ only touchdown. Gardena is 0-2 in Marine play and 3-4 overall.

McDaniel is the team’s fastest player and a top track and field athlete. He has run as fast as 10.9 in the 100-meter dash and his best long jump is 20 feet, three inches.

McDaniel transferred to Gardena from Southern California power Corona Centennial High (ranked No. 1 in California and second in the United States by Maxpreps this season) prior to the start of his junior season last year.

Two years ago as a sophomore at Centennial, McDaniel played mostly junior varsity but had a brief stint with the Huskies varsity squad. “I never played at all on varsity,” McDaniel said while at Centennial. Much could be because of the high competition of being on a squad with numerous players who are now on Major NCAA Division I teams.

Two years ago, the Huskies advanced to the CIF-Southern Section PAC Five finals where they lost to Bellflower St. John Bosco, that finished as the second ranked squad in the nation. The Braves would go on to win the California state title over a renowned Concord De La Salle team.

McDaniel played football since he was eight years old. He spent most of his youth football with the Southern California Falcons from the “Snoop League”. That league consisted of mostly squads from the Los Angeles Inner Cities.

“It was a tough league,” McDaniel said. “There was no weight limit for players. It made me tough.”

His Falcons made the playoffs but never won any championships.

As expected, the Panthers, who won their first three non-league games then lost the last four including their first two league contests, are struggling in the prestigious Marine League that includes all powers Narbonne, Carson, Banning and San Pedro, but are Division II in the CIF-L.A. City Section playoffs this year. If Gardena can get by the league’s other Division II squad in Washington on Oct. 30 at Washington, the Panthers know that the playoffs will, most likely, be easier than league. The Gauchos, Colts, Pilots and Pirates are all top Division I teams.

“I want us to get, at least, two league wins,” McDaniel said. “I’m not scared of Narbonne. I want to earn respect by Narbonne that I played hard.”

McDaniel is currently looking for a four-year college scholarship. He is doing well, academically, with a 3.7 grade point average in college prep classes.

“My goal is to get a scholalrship,” McDaniel said. “That is the only way that I’ll not have to pay.”

According to McDaniel and Gardena head coach Vincent Smith, he is undecided on the college.”

“He (McDaniel) needs to perform well, no matter who we play,” Smith said. “He’s done very well. He has good speed; he’s a good athlete and plays defense very well. I have confidence in what he does.”

McDaniel and the rest of the Panthers will look to do the best they can as they visit San Pedro in their third league game Friday at 7 p.m. At Washington last Friday, the Pirates evened their Marine record to 1-1 and overall mark to 4-3 with a 49-6 rout of the Generals.

All-purpose quarterback Mique Juarez may have de-committed from playing football at University of Southern California due to the recent firing of head coach Steve Sarkesian but he showed host West Torrance why he is continued to be heavily recruited by several other Major NCAA Division I colleges after he keyed North Torrance to a 35-17 victory over the Warriors last Friday.

Juarez, one of the most dominating players in Southern California, used his feet to rush for four touchdowns and his arm to pass for another in the Saxons’ sixth straight victory that improved them to 6-1 overall and 2-1 in the Pioneer League.

Juarez finished the game by rushing for 195 yards, 145 of those in the second half, on 24 carries.

West, which fell to 1-1 in league and 3-4 overall after winning the Pioneer League crown and making the CIF-Southern Section Western Division semifinals last season, contained Juarez in the first half but the North star turned things on in the final two quarters.

The Juarez Show began when he gave the Saxons, ranked third in the CIF-Southern Section Western Division, the lead for good on a 4-yard run. Earlier in the drive, Juarez had a 31-yard run that set up the go-ahead touchdown.

The Warriors attempted to get back into the game and cut the Saxons’ lead to 28-17 with 6:17 remaining when Michael Timmerman scored on a 21-yard run but North brought its lead up to 35-17 on Juarez’s 8-yard scoring run with 3:29 to go.

Juarez also had a 20-yard touchdown pass to wide receiver Jaye Washington in the first quarter. He completed 10 of 22 passes for 94 yards and two interceptions.

Timmerman, who scored both of the Warriors’ touchdowns, ran for 44 yards.

After standing out in West’s league opening 41-20 win over Lawndale Leuzinger on Oct. 9 at West, running back Brylen Baucham was sidelined with a shoulder injury. The Warriors also lost linebacker John Girardini, who had a strong performance in holding down Juarez and Co. in the first half, early in the second half because of an ankle injury.

North comes home to face cross town rival Torrance Friday at 7 p.m. The Tartars are struggling at 0-7 overall and 0-2 in Pioneer play after being routed at Leuzinger 60-0 last Friday.

West hopes to get back on the winning track as it visits Centennial in Compton at the same time. The Apaches lost at home against South Torrance 32-14 last Friday.

Carson tops Banning: After beginning its season at 0-4, Carson High’s football team is on the right track with a three-game winning streak after defeating traditional rival Wilmington Banning 32-20 in a Marine League game last Friday.

The Colts, who improved to 3-4 overall and 2-0 in league, had a strong game by freshman quarterback Jaja Bellinger who had two touchdown passes and more that helped set up other Carson scores. He had five key completions that aided the Colts’ first touchdown, a 6-yarder by running back Ari Harris to give Carson a 26-14 lead.

Bellinger threw for a TD pass from 28 yards to Dayshawn Littleton for the final Colt score.

The Pilots, who were looking to top Carson for the first time since defeating the Colts for the CIF-L.A. City Section Division I championship in 2000, scored a late touchdown but Carson already had the game well in hand.

Bellinger also had a TD pass of 46 yards to Noah Jackson that gave the Colts a 16-7 lead.

The Knights, who entered the game ranked fifth in the CIF-Southern Section Northwest Division, were led by running back Patrick Smith who rushed for 140 yards and two touchdowns on 32 carries.

Quarterback Brendan Marafino had a pair of TD passes to Bernard Amofa and Christian Arevalo.