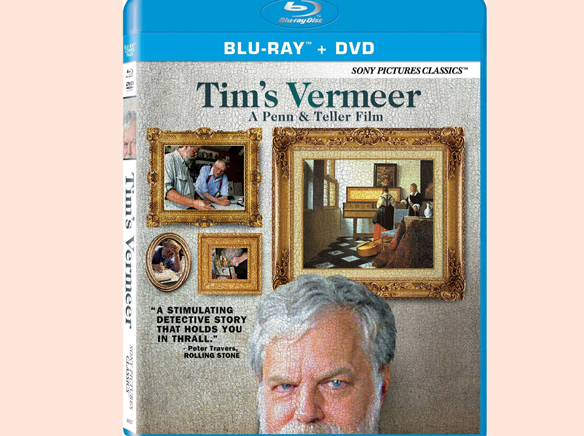 Art lovers will be fascinated by the clever "Tim's Vermeer," a film, now on DVD, that attempts to solve the puzzle of Dutch master Johannes Vermeer's art style and technique. How did Vermeer create paintings with such photographic realism long before the camera was invented?

Art lovers will be fascinated by the clever "Tim's Vermeer," a film, now on DVD, that attempts to solve the puzzle of Dutch master Johannes Vermeer's art style and technique. How did Vermeer create paintings with such photographic realism long before the camera was invented?

This question intrigued Tim Jenison, a Texas-based inventor who set off on an artistic quest that spanned a decade and was captured on film by director Teller of the magic duo Penn and Teller. Penn Jillette produced the film and serves as narrator in this intriguing documentary. Jenison's quest takes him to Holland, then on to the north coast of Yorkshire to meet with noted artist David Hockney and eventually to Buckingham Palace.

His search for answers is exhausting and at one point Jenison says he would have given up if he weren't being filmed. Both Jenison and Hockney agreed that Vermeer might have used a camera obscura to create such realistic works of art. This optical device was an invention that eventually led to photography and the invention of the camera.

What is so amazing is witnessing all the exhaustive preparation that went into Jenison's research and the techniques he used to create a replica of a Vermeer painting. Even more amazing is the fact that the inventor is not an artist.

Special DVD features include: Commentary with Teller, Tim Jenison, Penn Jillette and Farly Ziegler and deleted, extended and alternate scenes. There is also a Q & A featurette from the Toronto International Film Festival. Sony Pictures Classics, rated PG-13 for some strong language.

The billion dollar blockbuster "Frozen" won the Oscar for best animated film this year, but the more modest "Ernest & Celestine" was also a contender

The story is based on French children's stories about an unlikely friendship shared by an artistic little mouse named Celestine and a big burly bear, Ernest. While it didn't win an Academy Award, it won praise from critics who dubbed it "Fantastic! Delightful! Adorable" as well as "an enthralling tale of friendship for children and adults alike!"

What I found most impressive about this modest little movie was the charming watercolor artwork which was a pleasure to look at since it is so different from other animated films. It also has a fine voice cast with Forest Whitaker as Ernest and Makenzie Foy as the adorable little Celestine. Other voices include Lauren Bacall, Paul Giamatti, William H. Macy and Megan Mullally.

The storyline is a bit bizarre, dealing with collecting bear's teeth for use by mouse dentists. Celestine would rather draw pictures of bears than collect their teeth but it's a job she has to do to earn her keep. On one of her gathering expeditions she comes face to face with Ernest, a hungry bear in search of food. She cleverly talks him out of thinking of her as a snack, and in awhile the two become friends, proving that friends come in all shapes, sizes and species in this case.

But along with their budding friendship there are some pretty scary adventures, which only serve to bring this odd, but lovable duo closer together. There are DVD extras and a featurette on the making of the animated film which is rated PG for some scary moments.

What's New on DVD–For more animated action check out DreamWorks "Dragons: Defenders of Berk" Part 2. There's action at every turn and excitement on every ride as the young Viking Hiccup and his fearless friends embark on 10 new adventures based on the Academy Award nominated hit movie "How to Train Your Dragon."

The 2-disc set has10 thrilling episodes, plus bonus materials that include "World of DreamWorks Animation" and much more.. Not rated.

On July 22 Warner Bros. "Transcendence," staring Johnny Depp and Morgan Freeman, will be released on Blu-ray and DVD and will feature interviews with the all-star cast. In the film Depp plays Dr. Will Carter, the foremost researcher in the field of artificial intelligence, who is attempting to create a machine that combines the collective intelligence of everything ever known with the full range of human emotions.

His controversial experiments have made him famous, but they have also made him a target of anti-technology extremists who will do anything to stop him. Rated PG-13.

"Five Dances," available on DVD July 29, is the coming of age tale of a gifted young dancer who comes to New York City to pursue his career. The film, a visually sensual glimpse of life and first love in the contemporary dance world, was shot primarily in and around a Soho dance studio with original dances by the internationally renowned choreographer Jonah Bokaer.

With a cast of five of New York's most talented dancers, the film captures the emotional turbulence and creative excitement of a small dance company during the process of creation. Not rated.