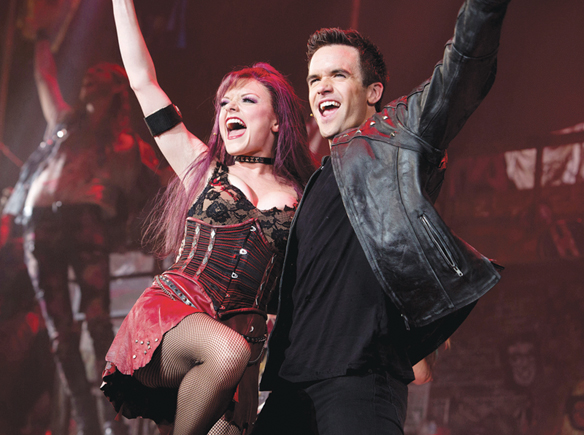 Attention rock music fans, do you dig Freddie Mercury and the sounds of Queen?  If the answer is “YES!”  come to the Ahmanson where “We Will Rock You” is partying on.  The theatrical rock musical, based on the songs written by Freddie Mercury, Brian May, Roger  Taylor and John Deacon , except for “Under Pressure” which was written by Queen and  David Bowie, runs through Aug. 24. The story and script are by Ben Elton. Brian Justin Crum and Ruby Lewis star as the two young rock lovers Galileo and Scaramouche respectively.

Attention rock music fans, do you dig Freddie Mercury and the sounds of Queen?  If the answer is “YES!”  come to the Ahmanson where “We Will Rock You” is partying on.  The theatrical rock musical, based on the songs written by Freddie Mercury, Brian May, Roger  Taylor and John Deacon , except for “Under Pressure” which was written by Queen and  David Bowie, runs through Aug. 24. The story and script are by Ben Elton. Brian Justin Crum and Ruby Lewis star as the two young rock lovers Galileo and Scaramouche respectively.

The frothy, flimsy story is set in the not too distant future.  Horror of horrors, Killer Queen (Jacqueline B. Arnold) is a music media mogul who has banned all rock music from the earth.  Now kids can only swing to the sounds of sappy elevator music.  But two young rebels refuse to conform and set out to find the music that Galileo dreams about.  He is certain it exists–somewhere out there.

Even if you’ve never heard of “I Want to Break Free,” “No One But You,” or “Who Wants to Live Forever,” you will recognize the sounds of “We Will Rock You” and the sports fan favorite, “We Are the Champions.”

On opening night the audience roared and waved light sticks of green and lavender (provided by the theatre that night.)  The music rocks and the ensemble cast knows how to sing it.  The vibe created is infectious.

With temperatures rising, a cool way to have fun with the family is to chill out at the movies or watch a DVD at home with a nice cold drink and some home-made pop corn.  On August 12 Disney is releasing  plenty of family friendly animated fare on  Blu-ray + DVD. Titles include: Disney’s “Tarzan,” “Bedknobs and Broomsticks,” “Hercules,” “Disney’s The Three Musketeers” starring Mickey, Donald and Goofy, a two movie collection in one—“The Adventures of Ichabod and Mr. Toad” plus “Fun and Fancy Free” and last, but by no means least, Disney’s “Muppets Most Wanted.”

And on the big screen check out the soaring adventures of that high-flying, high-spirited plane Dusty Crophoper, voiced by Dane Cook, in “Disney’s Planes: Fire & Rescue.”

In the film Dusty, the feisty crop duster turned award winning international racer, discovers that his racing days may be over because his gear box no longer functions properly.  His mechanic tells him until a new gear box can be found he can no longer race. He refuses to accept the bad news and decides to fly as fast as he can to prove his trusty mechanic wrong.  When he does the gear box burns out and he crash lands, accidentally starting a fire. He recovers from the disaster and decides to learn how to become a firefighting aircraft until he can race again safely.

The research that went into crafting this new adventure for Dusty the crop dusting plane was extensive and kids and adults will learn a lot about what happens when planes take to the air to put out major fires on the ground.  My husband, who served in the air force, admired the technical wizardry of the Disney animators who  turned these animated planes into believable fire-fighting crafts.

Ed Harris is the voice for Blade, a Ranger Rescue Chopper who teaches Dusty how to swoop down and drop water on the flames.  Wes Studie provides the voice for  Windlifter, a green heavy lift helicopter of American Indian decent and Hal Holbrook is the old fire truck named May Day. Julie Bowen, the mom on TV‘s “Modern Family,” is an air tanker named Dippy who develops a giant crush on Dusty.

Other voices are supplied by TV’s Brad Garrett and Ben Stiller’s parents Jerry Stiller and Anne Meara who play two automobiles who have come to a beautiful car resort to celebrate their 50th wedding anniversary. They go off to the quiet spot in the woods where they spent their honeymoon only to find themselves trapped by a raging forest fire.

The scenes of fire and rescue, smoke and flames and airplane jeopardy are exciting to watch, but may be too intense for small children, thus the PG rating for the film.

“Planes: Fire & Rescue” is not only exciting and entertaining, it teaches us a lot about how fires are fought from the air by heroic planes like Dusty and Blade Ranger.  What’s also fun is learning the back story of the new planes in this film.

Also coming to the home screen Aug. 12 is “Bears,” a Disneynature film that chronicles a year in the life of a mother brown bear and her two impressionable cubs, Amber and Scout.

Set against a majestic Alaskan backdrop, their journey begins as winter ends.  When they emerge from hibernation the three bears face the bitter cold and an exciting but dangerous outside world in the magnificent Alaskan wilderness.

To celebrate the in-home debut of “Bears” Disneynature is proud to continue the conservation program initiated with the film’s theatrical release.  For every purchase of the movie through Aug. 19, Disneynature will make a donation through the Disney Worldwide Conservation Fund to the National Park Foundation, the official charity of America’s national parks, to further protect and conserve endangered or threatened wildlife and wild places as well as enhance field research across more than 2.9 million acres of National Park Service land.

Bonus features on the “Bears” Blu-ray Combo Pack and Digital HD include the music video for “Carry On,” featuring Olivia Hold and four making-of-features including “Welcome to Alaska,” which tracks the filmmakers as they set forth on an epic journey to film mama bear Sky and her cubs in the wilds of the Alaskan frontier.  The film is rated G.

THE LONG VIEW: Trump’s political stock not even ‘Apprentice’ worthy