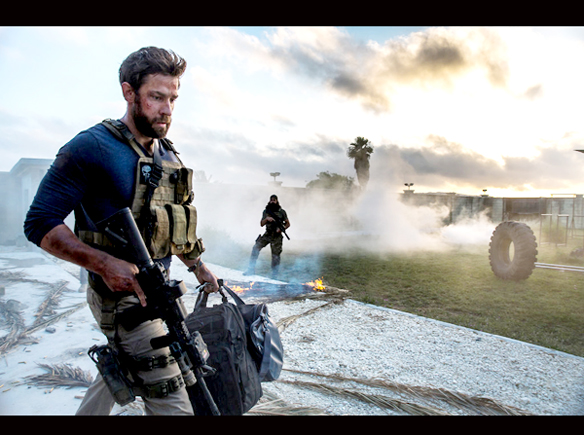 In 2012, shortly before the upcoming presidential election, a U.S. diplomatic facility in Benghazi, Libya was viciously attacked.  The result of the horrific assault left four Americans dead, including our Ambassador, Chris Stevens (Matt Letcher).  Reports at the time blamed the attacks on a film Muslims found offensive. This turned out to be an erroneous conclusion.

In 2012, shortly before the upcoming presidential election, a U.S. diplomatic facility in Benghazi, Libya was viciously attacked.  The result of the horrific assault left four Americans dead, including our Ambassador, Chris Stevens (Matt Letcher).  Reports at the time blamed the attacks on a film Muslims found offensive. This turned out to be an erroneous conclusion.

In the gripping, explosive “13 Hours: The Secret Soldiers of Benghazi,” based on the book of the same name, director Michael Bay (“The Transformers” franchise) recreates the events leading up to the attacks and the explosive battles that followed.

The film opens with the arrival of Jack Silva (well played by a bearded John Krasinski, TV’s “The Office”) who is reuniting with his friend Tyrone (Rone) Woods (James Badge Dale).  They are part of a six man team made up of former military men hired by the U.S. government to provide added security for a secret CIA station that is not officially in the country. Bob, the CIA station chief (David Costabile) treats them with disdain, feeling their protection is unneeded.  When the embassy comes under attack Jack, Rone and the other members of their team seek permission from Bob to try and save the ambassador since no military support is forthcoming, despite desperate requests for help. They are told by the CIA chief to stand down.

At this point in the narrative we see U.S. military forces in the region monitoring the events taking place, but they are not given permission to provide assistance.  Why they were not more quickly deployed is still a mystery. On their own the CIA contractors attempt to rescue the diplomatic personnel at their facility about a mile from the CIA outpost.

As the terrible events unfold, the tension is palpable and the resulting battles, assaults and on-screen explosions give us, the viewer, a taste of the horrible events that happened in Benghazi not so long ago.

Robert De Niro (“Joy,” “Silver Linings Playbook,” “Taxi Driver,”) stars as Ben Whittaker in the warm, endearing comedy “The Intern.”  At 70 Ben has come to the conclusion that retirement isn’t what it’s cracked up to be.  Now a widower, he not only misses his wife he misses the challenges that work once provided. When he sees an ad for a senior intern at a very successful online fashion site founded and run by Jules Ostin (Anne Hathaway, “Les Miserables,” “Devil Wears Prada”) he learns how to film a video resume. It’s obvious from his charming visual resume that he’s willing to learn new tricks. It’s also obvious that he has a lot to offer all the other young company employees, like showing his fellow interns the value of a handkerchief and a briefcase. They in turn help him become technically proficient. It takes a lot longer for Jules to warm up to him.  She is an overworked perfectionist whose commitment to her company is taking a toll on her marriage. Due to the pressures of running a company she doesn’t have enough quality time to spend with her “house-husband” (Anders Holm,”Workaholics”) and their adorable, precocious young daughter.

Written and directed by Nancy Meyers (“Something’s Gotta Give,” “It’s Complicated,” “The Holiday”) the film is insightful, fun and beautiful to look at.  The sets make you want to move in and Hathaway’s clothes are tasteful and attractive. If you are looking for an old-fashioned, upbeat, truly funny comedy check out “The Intern.”  Warner Bros.Home Entertainment, rated PG-13 for some suggestive content and brief strong language. Running time: 121 minutes.

Special features include “Learning From Experience,” “Designs on Life” and “The Three Interns.” Without ever being preachy, the film shows us how one person, like Ben, can elevate everyone around them by their example and experience.

Other recent DVD releases include:

In the film Silva plays a Brooklyn based artist who, with his boyfriend (Adebimpe) and their best friend Polly (Wiig), is trying to have a baby.  As the trio deals with complications of conception, confrontations with an annoying, menacing neighbor cause problems. Bonus materials include commentary with Silva, Wiig and Adebimpe, “Nasty Baby: Behind the Scenes” and a photo gallery. “Nasty Baby” is rated R for sexual content, some disturbing violence, language and drug use.

“Infinitely Polar Bear,” based on a true story, stars Mark Ruffalo as Cam, a stay-at-home dad who is recovering from a manic breakdown. His wife, Maggie (Zoe Saldana) enters an out-of-state graduate school program, hoping to be able to provide a better life for her family. Cam agrees to take care of their spirited young daughter while his wife is away, but quickly finds himself in over his head. Special features include Commentary with Mark Ruffalo and director Maya Forbes and LA Film Festival Q  & A with the cast and filmmakers.  From Sony Pictures Classics, rated R for Language.