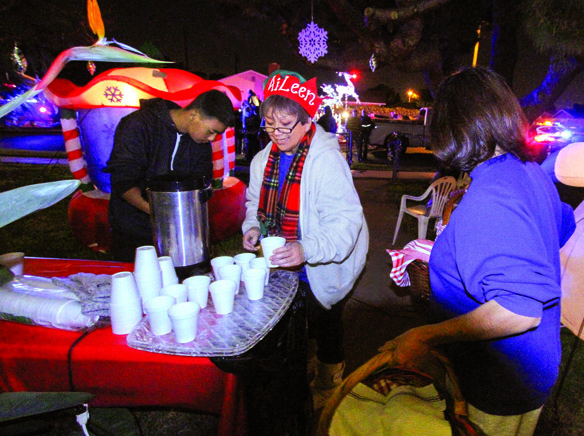 During this holiday season, when some people are just beginning to concentrate on helping the needy members of the community, it's just business as usual for St. John Evangelical Lutheran Church in Gardena, a church official said.

Rev. George Villa, the church pastor, said that St. John is home to a program that feeds the homeless and working poor of Gardena 5 to 6 days a week, 365 days a year, and has been doing so for the last 19 years.

During this holiday season, when some people are just beginning to concentrate on helping the needy members of the community, it's just business as usual for St. John Evangelical Lutheran Church in Gardena, a church official said.

Rev. George Villa, the church pastor, said that St. John is home to a program that feeds the homeless and working poor of Gardena 5 to 6 days a week, 365 days a year, and has been doing so for the last 19 years.

“When you give during the holidays your giving to make yourself feel good; it's about you,” Villa said. “When you do it three sixty five (days a year) it's a discipleship and a Christian lifestyle; it's a lifestyle issue where your focus is the needs of others and that begins to transform you. It makes you realize that you need to think globally but act locally, to use an old cliché.”

He said that an average of 100 people are fed during each of the regularly scheduled Monday night, Wednesday night and Friday night meals. The church also serves a pizza-and-salad lunch on Saturdays and hands out sack lunches on Sunday that are prepared by children from the Manhattan Beach Trinity Lutheran Church's Sunday school.

During 2011, more than 28,000 meals were served to people in need through the church's meal program, Villa said.

The church's ability to provide this year round service comes from having the support and participation of a wide range of other religious organizations and businesses.

“We have a great ecumenical partnership, that's what we in the Lutheran tradition call how we work with other churches and other denominations,” Villa said.

These other denominations include Roman Catholic, Seventh-day Adventist, Baptist and several non-denominational groups, he said.

The entire program runs off of donations of time and money from church and community members, with the majority of the food being donated by businesses such as Pizza Hut, Chipotle, Kentucky Fried Chicken, Star Bucks, Olive Garden, Vons and Ralphs.

The main kitchen crew that prepares the nightly meals is comprised of homeless or formerly homeless men who originally came to eat at the church and now help run the program and supervise volunteers.

One of these men is John Hagemann, 52, who became homeless in 2000 after being laid off from Hughes Aircraft, where he worked as a quality-assurance inspector.

“It was scary and I didn't know what to do,” Hagemann said.

After becoming homeless, Hagemann started sleeping in Alondra Park because he had seen homeless people there and thought that was where he should go, he said.

He also came to St. John for meals, where he met Villa.

Eventually Hagemann was given a small motor home by a friend, which he parked on various streets in Gardena until police told him he needed to move on, he said.

Villa allowed him to park in the church parking lot after the incident and it has become his home ever since.

Hagemann said he began helping to prepare meals at the church and eventually became the kitchen-crew supervisor.

He said the church's meal program is something the local homeless community counts on.

“It's (the meal program) very, very important,” Hagemann said. “We serve (Monday, Wednesday and Fridays), and sometimes twice on Saturdays. There are other churches around here that only serve once a month or once a week and so everybody comes here. Tonight's meal may be the only meal people get for two days.”

Another person who stressed the importance of the program is a 55-year-old formerly homeless man is Dennis, who asked that only his first name be used in the article.

Dennis said that 15 years ago he went through a messy divorce and shortly thereafter his 7-year-old son was killed by a drunk driver. The combination sent him into a mental spiral and he ended up on the streets.

He said he served in the Navy for five years and has a bachelor's degree in history from UC San Diego, but due to his mental issues, he has never fully reintegrated into the work force.

He now has a part-time job that nets him enough to stay in a cheap hotel and pay for some necessities, but without the meals served at the church, he would not be able to make ends meet, he said.

He said the people running the meals program don't ask about a person's background or religion, they just make sure those in need are fed and have clothes.

“We need more places like this,” Dennis said. “We need more people like Pastor George (Villa), who actually give a (bleep) about us.”