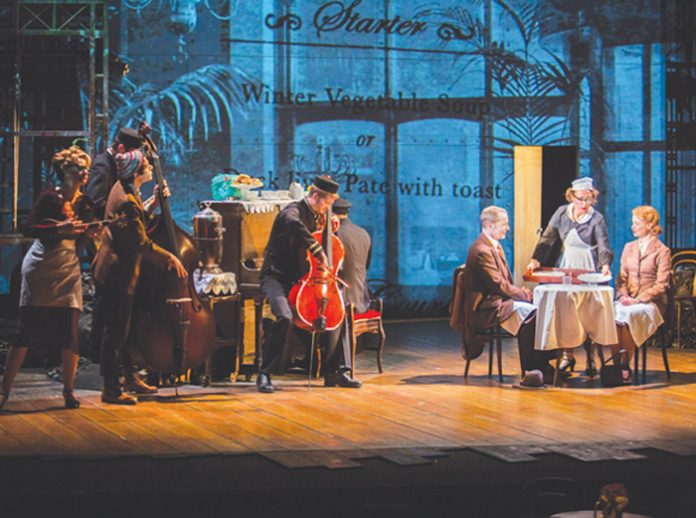 Noel Coward's screenplay for "Brief Encounter," the 1945 film classic directed by David Lean, was based on a Coward play, "Still Life." And now the melancholy screen romance has returned to the stage in the Kneehigh production currently on view at the Wallis Annenberg Center for the Performing Arts in Beverly Hills.

Noel Coward's screenplay for "Brief Encounter," the 1945 film classic directed by David Lean, was based on a Coward play, "Still Life." And now the melancholy screen romance has returned to the stage in the Kneehigh production currently on view at the Wallis Annenberg Center for the Performing Arts in Beverly Hills.

Cleverly adapted and directed by Emma Rice, the bittersweet love affair is presented using multimedia techniques that blend film and stagecraft along with puppetry, music, song and dance. Film sequences are artfully blended from the start as film credits appear on a screen center stage. Hannah Yelland, reprising her Tony-nominated role as Laura. makes a tearful retreat from her lover Alec (Joe Sturgeon), stepping through the screen to join her husband Fred (Joe Alessi). Now she and Fred are black and white screen images as Alec stands outside on stage. And then the story begins.

Laura and Alec meet by chance in a train station tea room . A strong wind outside has blown something into her eye and Alec, a doctor, removes the irritant. They meet again on the following Thursday and he asks if he can join her for lunch and her weekly movie. Laura, trapped in an emotionally dull marriage, suddenly finds herself falling in love with the doctor, also married with children.

Except for Laura and Alec, all the other performers play various roles, slipping neatly from character to character. Myrtle (Annette McLaughlin) runs the shabby tearoom in the train station with her intimidated little assistant Beryl (Dorothy Atkinson) and Alessi also plays Albert who is smitten with Myrtle. These two add fun and dance to ease the sadness of the passionate, doomed romance shared by Laura and Alec.Cleverly, Laura and Fred's children are personified by two lively puppets who cavort and get into mischief adding another layer of imaginative stagecraft.

Kneehigh, a UK based theatre company, has created a love letter to Noel Coward, celebrating his skills as a playwright, screenwriter, composer, lyricist and poet. The show, while keeping the melancholy feel of a doomed love affair, has cheered the intertwining stories with broad humor and musical numbers by Coward that include "Mad About the Boy,” "A Room With a View," and "Go Slow Johnny" as well as other songs using verse and lyrics by Coward set to new music composed by Stu Barker.

The show, one hour and 35 minutes in length, is performed without intermission.

"Gravity," a visually stunning cinematic masterpiece written by the film's director Alfonso Cuaron and his son Jonas Cuaron, has been nominated for 10 Academy Awards. While the storyline is basically a simple one, the breathtaking, innovative visuals are groundbreaking as we, the viewers, are hurled into the vastness of space with two of America's most popular stars, Sandra Bullock and George Clooney.

If you have ever wished to be an astronaut, seeing this deep space thriller will definitely give you second thoughts. As the film begins Dr. Ryan Stone (Bullock) is making some minor repairs outside the spacecraft along with veteran astronaut Matt Kowalski (Clooney)

Everything seems calm and peaceful as they enjoy the view high above earth. Suddenly, almost without warning, this routine mission turns deadly as space debris comes hurtling in their direction, eventually destroying their shuttle.

Their crewmates are killed instantly and Stone and Kowalski, who are tethered to nothing but each other, start to spiral out into the darkness. In the deafening silence that ensues, they realize they have lost their link to earth. To give Bullock a fighting chance at reaching another space station for refuge before her oxygen is used up, Clooney cuts himself free which was the basis for the best joke of this year's Golden Globes ceremony as Tina Fey quips: "George Clooney would rather die than date a woman his own age."

Fear turns to panic as Bullock tries to control her breathing in order to save the remaining oxygen at her disposal. Will the life-sustaining oxygen last until she floats to the next station? Soon her desire to survive kicks in and she gives it all she's got, hoping that somehow she will also be able to rescue her heroic team member Clooney, now adrift.

If awards are an indicator of what is to come at the Oscars Cuaron is certain to win an Academy Award for best director since he has already been honored in that category by the Golden Globes and the Directors Guild of America. The film should also garner a majority of the technical awards for which it has been nominated.

The soon to be released Blu-ray and DVD Combo Packs provide plenty of bonus material which gives us insight into how this amazing film was made. The painstaking process is chronicled in nearly three hours of features that visually dramatize the meticulous innovation needed to create the world of Zero G on screen as well as the physical and emotional demands Sandra Bullock endured on set in order to achieve the sense of weightlessness

You will also experience the incredible four-year journey undertaken by director Alfonso Cuaron as he crafted this unbelievable film. What is ultimately so amazing is the realization that almost everything seen on the screen was not really there. It only became visible via technical wizardry and computer generated images. The process is almost as exciting and unbelievable to watch as the film itself.