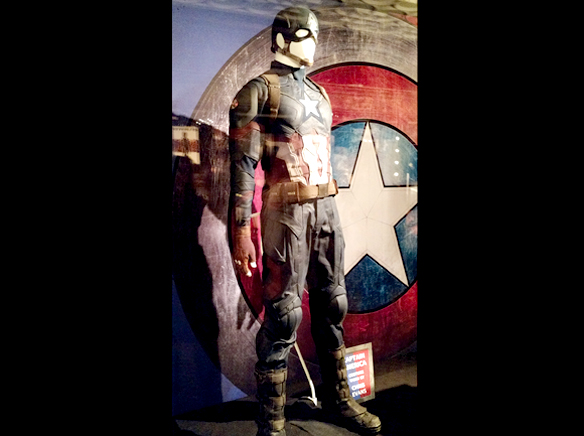 “Captain America: Civil War” is off to a ‘MARVEL-ous’ start, bringing in over $800 million worldwide to date. In this latest superhero mega movie, Iron Man (Robert Downey, Jr.) and his supporters face off against Captain America (Chris Evans) in teams of six each.  And, for Marvel fans, the action-packed battle scenes come fast and furious.

“Captain America: Civil War” is off to a ‘MARVEL-ous’ start, bringing in over $800 million worldwide to date. In this latest superhero mega movie, Iron Man (Robert Downey, Jr.) and his supporters face off against Captain America (Chris Evans) in teams of six each.  And, for Marvel fans, the action-packed battle scenes come fast and furious.

It does help if you are familiar with other films in the series like “Captain America: The First Avenger” and “Captain America: Winter Soldier,” which detail the friendship between Steve Rogers, aka Captain America, and his World War II buddy, James “Bucky” Barnes (Sebastian Stan), also known as the Winter Soldier. Eventually you will figure out their close connection as I finally did, but the link will be more apparent if you have already seen the other two films.

As “Captain America: Civil War” begins, the Avengers are trying to make the world a better place in Lagos, Nigeria, but things get out of hand.  Soon there is massive collateral damage which causes the world and the United Nations to question the group’s ability to keep evil in check.

After the botched Nigerian battle, Tony Stark (Iron Man) meets Alfre Woodard, the mother of a young man killed in a previous battle with evil vs. the Avengers.  As a result Stark begins to agree with the Secretary of State and 116 nations that the Avengers should sign the Sokovia Accords, named after a fictional city destroyed during another super-hero invasion in a previous super hero film “Avengers: Age of Ultron.”

In that story, the battle between good and evil forces also led to catastrophic damage.

Now back to the current film plot. Captain America does not want to wait to be asked for help by the UN and remains steadfast in his resistance to signing the Accords.  He is also determined to help his buddy, now known as “The Winter Soldier,” regain his reputation.  To accomplish this, they must find out who is controlling the Winter Soldier’s mind against his will.  Another clue, the perpetrator is a character from “Avengers: Age of Ultron.”

The split decision over honoring the UN-sanctioned Accords  results in a major conflict between the two rival Avenger forces.  And at this point, what really lightens up the film, and I must confess what led to may favorite part of the movie, is Tony Stark reaching out to a neophyte hero, the very young Spider Man.

According to co-director Joe Russo, “ We wanted to introduce free radical characters into the storytelling.”  And young Spidey is all of that and more.  For starters, he’s a 15-year old kid from Queens  with special powers unlike any of the other Avengers.  He is also loaded with youthful enthusiasm which generates much appreciated comic relief. To capture this youthful, awe-filled energy the filmmakers cast 19-year-old Tom Holland.  His presence in the big on-screen battle between the opposing Avenger forces is truly a highlight of the film.

“Captain America: Civil War,” in 3-D, is playing at the El Capitan Theatre, 6838 Hollywood Blvd, through May 22.  After the film be sure to check out the downstairs display which features costumes from the movie as well as a copy of the very first Captain America comic book.  Marvel comic fans will also enjoy the chance to catch up on the lore via photos.

And check out the Disney Store at the theatre where you can buy memorabilia from the movie to add to your personal collection.  You can also enjoy soda fountain treats before or after the film.  For more information and tickets call: 1-800-DISNEY6 (800-347-6396) or visit www.elcapitantickets.com.

On May 27, Disney’s “Alice Through the Looking Glass” arrives at the El Capitan.