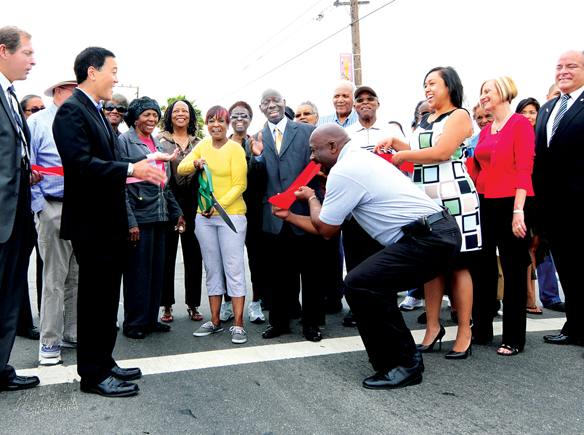 Commuters trying to cross Rosecrans at Purche Avenue no longer have to hold their breath and play Russian roulette, as the well-traveled avenues now have a traffic signal.  After decades of requests from local who frequent the businesses in the area, the signal now allows commuters and pedestrians alike a safe means to maneuver busy Rosecrans Avenue.

The traffic signal had its unveiling under a gloomy morning sky May 22. A small gathering of residents joined Gardena officials and department heads to christen the moment.

Assemblyman Steve Bradford, D-62nd District, was not in town to join the festivities, but has been credited with spearheading the addition of traffic lights at the intersection.

“After many years of accidents and unsafe conditions at the intersection of Purche and Rosecrans, I was thrilled to finally see a traffic signal installed yesterday in Gardena,” Bradford said in a press release. I” have been advocating for a signal at this intersection since I was a member of the City Council.”

The assemblyman’s sister, Vikki Bradford, was chosen by Tanaka to cut the ribbon, officially welcoming the new lights during a special ceremony.

“Having fought for this signal for so many years, I couldn’t be happier that my sister was able to participate in cutting the ribbon,” Bradford said. “Gardena has always been a family town—it’s where my family moved when I was a child and where we still live—and this traffic signal will make life safer for all families in Gardena.”

For years, Gardena residents have been soliciting their city officials for the construction of a traffic signal at this intersection. In his invitation to the ceremony, Mayor Paul Tanaka stated that the newly-constructed traffic signal will “slow down traffic and … make the intersection safer for vehicles and pedestrians alike.”

Lansdell said there will be other traffic-signal projects along Rosecrans Avenue.