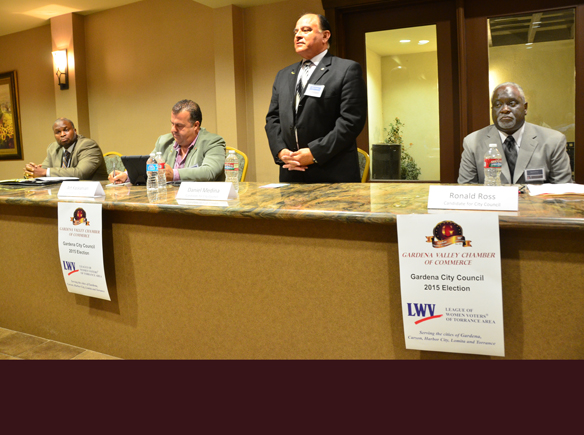 Gardena residents were able to meet one candidate running to keep his seat, and three other men running to become Gardena’s newest city councilmember(s) at a candidate forum hosted by the Gardena Valley Chamber of Commerce, and conducted by the Torrance branch of the League of Women Voters Feb. 17.

Gardena residents were able to meet one candidate running to keep his seat, and three other men running to become Gardena’s newest city councilmember(s) at a candidate forum hosted by the Gardena Valley Chamber of Commerce, and conducted by the Torrance branch of the League of Women Voters Feb. 17.

Councilman Dan Medina, and challengers Mark Henderson, Art Kaskanian and Ronald Ross were all on hand to express their views in a Q&A-style format, moderated by Athena Paquette Cormier of the Torrance League of Women Voters, on how they would improve the city and enhance the lives of its residents.

New business dominated the goal among all candidates.

Candidate Ron Ross said the way he would improve Gardena is to make it more attractive to current residents and potential residents by bringing in more businesses — but not just any business. Ross wants businesses in Gardena that create careers, not just jobs.

“We have an opportunity to be a destination city,” Ross said. “As you improve aesthetically, businesses will want to come here.”

Candidate Art Kaskanian agreed with Ross that more businesses should put down stakes in Gardena. As the current chair of the Gardena Planning Commission, Kaskanian said he has been responsible for the presence of several new businesses that are currently thriving in the city, such as Chipotle Mexican Grill, Yogurtland, and Starbucks.

Candidate Mark Henderson believes public and private partnerships between the city and businesses is the way to improve the city’s economic development.

Henderson also believes that focusing on bringing more family-friendly businesses to the city would go a long way toward making the city more attractive to the children, who could quite possibly be the next generation of Gardena residents.

When it came to the issue of the black water sludge coming out of the water faucets of residents, all the candidates said that more control and accountability were needed to rectify the situation.

Medina, who spoke out at the recent forum held by Golden State Water Company, which is responsible for Gardena’s water supply, said the company’s solution for residents to flush their toilets regularly was unsatisfactory to say the least.

“The flushing is basically a band-aid,” Medina said. “We need new pipes to have clean water. They need to replace the pipes.”

Henderson would push for more accountability, in addition to repairs to the city’s water system.

“We need to have them [Golden State Water Co.] present to us on a monthly basis, the various phases of the things they are doing to solve the problem.”

When the issue turned to how to keep drugs out of the city, everyone agreed that community involvement was the key to ensuring that drugs stay far away from Gardena and its residents.

“We need more community policing to help the police do their jobs,” Ross said. “We also need education and counseling in order to catch kids at an early age to prevent drug use.”

Henderson agreed that educating kids early about the dangers of drug use would have a major impact and would help raise awareness city-wide.

When asked to name the best thing about Gardena, all four candidates were quick to give their opinion on what made the city such a special place.

“This is the only place where I know each and every one of my neighbors,” Ross said.

Medina touted the residents as the best part of Gardena.

“The people is what makes our community the best city,” Medina said.

Kaskanian believes his feelings on the city should be reflected in a nickname change, and agreed with Medina’s suggestion.

“I love this city,” Kaskanian said, “As Dan said, maybe we should call it the Friendly City instead of the Freeway City.”

Henderson called Gardena a great place that allows everyone to come together and prosper as a community.

“Diversity is the best thing about Gardena,” Henderson said. “Through that diversity we thrive. Gardena is a microcosm of the melting pot of the country.”