“Pete’s Dragon” first appeared on screen in 1977 and combined live-action with animation. Now the huge, lovable dragon is back in a charming remake directed by David Lowery, who co-wrote the screenplay with Toby Halbrooks. This time however, the 24-foot magical creature is no longer a hand-drawn cartoon, he’s a lovable dragon created by Eric Saindon of Weta Digital that is covered in soft green fur composed of 15 million computer generated hairs.

“Pete’s Dragon” first appeared on screen in 1977 and combined live-action with animation. Now the huge, lovable dragon is back in a charming remake directed by David Lowery, who co-wrote the screenplay with Toby Halbrooks. This time however, the 24-foot magical creature is no longer a hand-drawn cartoon, he’s a lovable dragon created by Eric Saindon of Weta Digital that is covered in soft green fur composed of 15 million computer generated hairs.

This reimagined Elliot is as lovable as a giant puppy, but there is also a touch of “cat’ in this dragon. According to the director, “There’s a scene where Elliot wakes up in his cave and every bit of his behavior in that shot is based on one of my cats.” But overall this giant creature has the personality of a puppy dog that is totally devoted to his friend, Pete.

The story begins as young Pete and his parents are off on an adventure in the Pacific Northwest. The little boy is reading from a storybook “Elliot Gets Lost,” about a lost puppy. when a deer runs in front of their car. As his dad swerves to avoid hitting the animal their car overturns.

Frightened and alone, Pete hears wolves howling in the darkness. This is followed by strange rumbling sounds. Suddenly Pete is face to face with a gigantic green dragon. With tears running down his cheeks the child asks: “Are you going to hurt me?” As the creature looks back at him with big gentle eyes, Pete realizes he is safe.. Unafraid, Pete allows the gentle giant to pick him up in his paws and the two of them fly away to the dragon’s cave.

For quite a few years the two keep each other company deep in the woods, until Gavin (Karl Urban) starts to cut down trees in their undisturbed forest area. His brother Jack (Wes Bentley), who owns the local mill, is unaware of his brother’s unauthorized activities. Soon Jack’s fiance (Bryce Dallas Howard), a forest ranger, is also disturbed by Gavin’s destructive activity in the pristine forest location.

Things really take a turn for the worse when Gavin sees the shy, elusive dragon and decides to capture the mythical creature and display it for money. At first no one believes Gavin, even though Grace’s father (Robert Redford) also claimed he saw a dragon in the woods many, many years earlier. Now, Grace begins to wonder if her Dad’s tall tales are actually true.

This new version of “Pete’s Dragon,” is perfect for kids to share with their parents. In fact, when I saw the movie at the El Capitan I thought back to my childhood days when my parents took my sisters and me to Disney animated films. It gave my dad the opportunity to see the movies without feeling too grown up for such an experience.

So, kids, be sure to take mom and dad with you when you see “Pete’s Dragon.”  They will be glad you did. “Pete’s Dragon” is rated PG for some action/peril and brief language.

“Pete’s Dragon,” at the El Capitan Theatre through Aug. 28, has an exclusive display of Disney dragon designs. Dragons have captured the imagination of Disney storytellers long before the 1977 live-action animated version of “Pete’s Dragon” hit the silver screen. These magical creatures have been featured in Disney movies, on television and in Disney theme parks throughout the world for a long, long time. Remember the fantastic, fire-breathing dragon from “Sleeping Beauty” that captured our imaginations in Disneyland’s “Fantasmic?”

And then there was the sweet, charming animated cartoon “The Reluctant Dragon.” So after the film be sure to check out all the drawings and sketches in El Capitan’s exclusive “Disney Dragons” display. Also after the movie, or before, you can go to the adjacent Ghirardelli Store for an ice cream soda, sundae or banana split. They also have Disney DVDs and toys on sale. Right now plush toys from “Finding Dory” are on sale at a big discount.

Alas the night we saw the film the last Elliot plush Dragon toy was sold out. Too bad, as I really, really wanted one. Also the store gives out a free sample of their delicious chocolates. To purchase advance tickets at El Capitan, visit www.elcapitantickets.comor call 1-800-347-6396.

On Sep. 2-18 the El Capitan will present Disney’s “Beauty and the Beast.” Before the movie  Belle will appear live.

Disney on stage: “Newsies,” the 2012 Tony Award winner for Best Score and Best Choreography, is coming to the Hollywood Pantages for an all too brief engagement, Aug. 30 to Sept. 4 only. “Newsies” was last seen at the Pantages back in 2015 and I was blown away by the gravity defying dance numbers. For tickets and information call 1- 800-982-2787 or online at HollywoodPantages.com. .

Coming soon to DVD:  You can now pre-book a Blu-ray-DVD copy of Disney’s “Jungle Book” and “Finding Dory.”  Both films are well worth seeing. For fine family film fare, nobody does it better than Disney. 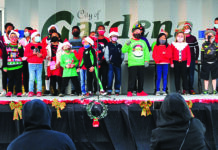