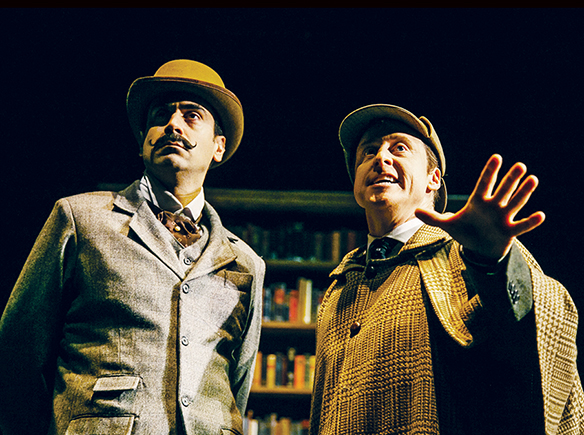 Sherlock Holmes and Doctor Watson are fictional super sleuths brought to life by author Sir Arthur Conan Doyle. From 1887 to 1893 they were the primary characters in Sir Arthur’s detective novels, which were overwhelmingly popular with readers. Then suddenly Doyle decided to stop writing about Sherlock and Watson in order to focus on more substantial subjects like British history and poetry.

Despite protests from his publisher, Doyle killed off Holmes in “The Final Problem,” published in 1893. With the two characters dead, he would no longer have to write about them.

It is said that fans were so devastated by Sherlock’s death, they wore black armbands in mourning.

However, after an eight-year hiatus, Doyle relented and wrote “The Hound of the Baskervilles,” a story that predated Sherlock’s death. After that other novels were penned about the clever detective. “It was elementary” and satisfied a world of fans yet again.

A future fan was Richard Lancelyn Green, considered one of the finest scholars on Conan Doyle and his creations, Sherlock Holmes and Watson. The play “Mysterious Circumstances” at the Geffen, written by playwright Michael Mitnick and directed by Matt Shakman, focuses on Green’s obsession and his mysterious death. Was it suicide or was it murder? To this day the case has not been solved. Where oh where is Sherlock Holmes when you need him?

Alan Tudyk is excellent as Green and Sherlock Holmes as well. He is also a man of great stamina since he is on stage in almost every scene. His dual performances are worth the price of admission.

Playwright Mitnic was inspired to write “Mysterious Circumstances”  after reading David Gran’s 2004 article in the New Yorker about Richard Green’s death. Mitnik  begins his play as two friends knock on Green’s door. When there is no answer, they enter and find Green’s body on the floor.

The story intercuts from past to present as we learn about Doyle and his wife, Touie (Helen Sadler) who is dying, but still maintains a happy outlook on life. Sadler also portrays every other woman in the play from Doyle’s now elderly daughter Dame Jean to Coroner Bartleby and a police woman. There is a large cast of characters on stage, all brought to life by just seven actors.

And just like Sherlock’s nemesis Moriarty, Green also has a potential foe in the form of an American Holmes scholar played by Hugo Armstrong. The American is certainly not a friend, but could he be a killer?

At one point, Green is able to visit with Doyle’s daughter Jean who posses a chest that contains priceless Doyle memorabilia like letters and unpublished stories. She allows Green to look through the chest for a few minutes, then takes it away. She tells him she does not want family members to get ahold of the contents because they would auction off the items piece by piece to collectors for money. Instead she intends to give everything to the British Museum. But after her death it is announced that there will be an auction. Horrified Green works tirelessly to stop the auction. Could that be the reason he is murdered?

Brett J. Barnakis designed the sets with lighting by Elizabeth Harper. Original music and sound design are by Jonathan Snipes with costumes created by E.B. Brooks.

STILL A MYSTERY—Ramiz Monsef, left, and Alan Tudyk star in the world premiere of Mysterious Circumstances at Geffen Playhouse. The productions is directed by Geffen Playhouse Artistic Director Matt Shakman.

Osmond Lindo to be honored at UMC event