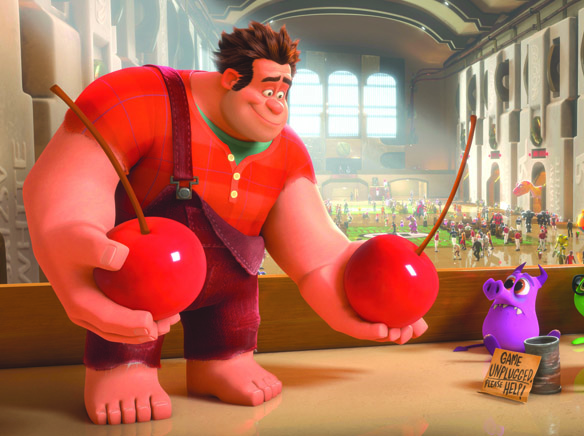 It has also become a darling with the critics. Betsy Sharkey of the Los Angeles Times began her review by saying “It’s not just the joystick junkie in me that admires “Wreck-It Ralph…” The movie’s subversive sensibility and old-school/new-school feel are a total kick.”

It has also become a darling with the critics. Betsy Sharkey of the Los Angeles Times began her review by saying “It’s not just the joystick junkie in me that admires “Wreck-It Ralph…” The movie’s subversive sensibility and old-school/new-school feel are a total kick.”

“Wreck-It Ralph” takes us back to the 80’s when Arcade games were the rage. For a quarter kids and teen-agers could grab a joy stick and manipulate the characters within their video game of choice.

As the film begins Ralph (voiced by John C. Reilly) is busy demolishing a big high rise building, breaking its windows with his oversized fists. He is the bad guy of the game called  “Fix It Felix Jr.” Felix (voiced by Jack McBrayer) is the hero who scampers about, fixing and repairing the damage Ralph has caused with his magic hammer.

All the little characters in their game admire Felix, but over-sized Ralph is an outcast who, when the Arcade closes, is relegated to the junkyard where he leads a very lonely life.

To help ease his unhappiness and isolation he eventually takes part in a Villain’s Support Group where the bad guys go to commiserate their under appreciated roles in their Arcade games. They also try to comfort themselves by affirming  “bad is good.“

Like “Toy Story,” the game characters have a life of their own when the Arcade closes for the night and no humans are around.

After hours they can step outside of their game boxes and enter into the empty Arcade via “Game Central Station” for a change of pace.

For thirty years Ralph has been demolishing a big high rise building by day, then leading a lonely life after hours. As he returns to his game box on the night of their 30th anniversary he discovers there is a big 30-year celebration party going on and every one from the game is socializing, but he has not been invited.

His role as the bad guy, coupled with his very large size in comparison to all the other game characters, has kept him isolated and this night he decides to join the group, much to their dismay.

When he is totally rejected he sets off to prove to them that he is a hero at heart. To do this, Ralph enters another game box in order to win a medal to gain peer acceptance.

The next game we encounter is a macho war-styled game called “Hero’s Duty” where Ralph hopes to win a gold medal for bravery. Here he meets Sergeant Calhoun (voiced by Jane Lynch of TV’s “Glee”) who looks super sexy, but she is tough as nails.

He is able to win a medal, but unleashes a super computer bug in the process. When he runs off with his medal, he is followed by Calhoun in hot pursuit.

To escapes from the “Hero Duty” game with his prize, Ralph dashes into the “Sugar Rush” computer box, a game, filled with all sorts of sweets and confections where a big race to the finish takes place over and over every day.

If you were an Arcade game player in your youth, you will recognize the historic characters from vintage games, but even if you are not, the story will make sense. There is a sweetness to the plight of both Ralph and spirited Vanellope, who just wants to race like the other little gals in her game.

In a non-preachy way, the story explores the importance of friendship, love and acceptance. Rated PG for some rude humor and mild action violence.

If you are in the LA area you may want to check out “Wreck-It Ralph” in 3-D at the El Capitan Theatre in Hollywood where it will run thru Dec. 18.

Along with the film there is live stage show featuring Disney’s newest characters, Ralph and Vanellope, who perform on stage with the El Capitan DJ. There is also audience participation and prizes. After the film you can enjoy a large display of artwork and models including a whole confection display depicting the domain of “Sugar Rush.”

Bring your cell phone or camera because you can photograph the kids with a giant model of Ralph in the lobby area.

For tickets and information, call 1-800-DISNEY6 or on line at www.elcapitantickets.com.

After COVID delays, prep sports takes off and finishes

RE agent serves free meals to local seniors in lockdown