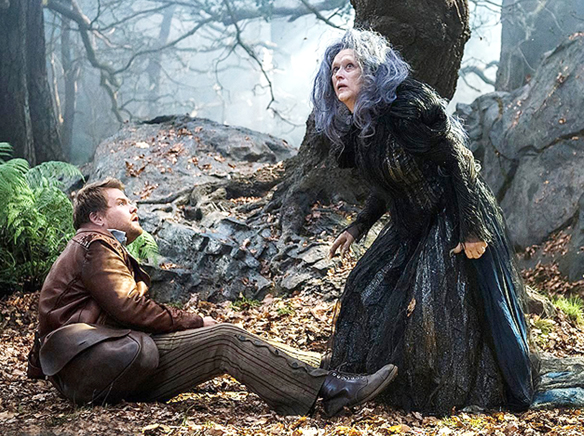 The Hollywood musical, once a staple on the silver screen, has been absent for quite awhile, replaced by Marvel-ous movie scenarios and comic book heroes and villains. But on Christmas day things changed with the release of the sumptuous Disney musical “Into the Woods,” based on the enduring and endearing Broadway hit by composer Stephen Sondhein and librettist James Lapine.

The Hollywood musical, once a staple on the silver screen, has been absent for quite awhile, replaced by Marvel-ous movie scenarios and comic book heroes and villains. But on Christmas day things changed with the release of the sumptuous Disney musical “Into the Woods,” based on the enduring and endearing Broadway hit by composer Stephen Sondhein and librettist James Lapine.

The film, directed by “Chicago’s” Rob Marshall, stars Meryl Streep as the Witch, British actor James Corden as the Baker, Emily Blunt as the Baker’s Wife and Johnny Depp as the big, bad Wolf. And, like “Chicago,” this new movie musical could be destined for Oscar gold.

Speaking of gold, there’s plenty of on screen gold–like the large golden eggs laid by the Giant’s very special hen and a beautiful golden harp owned by Mr. and Mrs. Giant who live atop the beanstalk that Jack accidentally planted. Ah, but that’s just one of the many mingled stories that takes place in this little kingdom.

If you aren’t familiar with the storyline for this Sondheim fairytale, it’s about what happens after the “happily ever after” part, when real life sets in and the prince turns out to be not quite so charming after all.

Things start out on a happy note as we meet the various fairytale folk who inhabit a kingdom near the woods. First there is the baker and his wife who want to start a family, but the witch who lives next door has put a curse on them. She will remove the spell if they promise to go into the woods in search of four very particular items. Once they have found all four they are to bring them back to the witch and all will be well–and with those instructions the baker goes into the woods, leaving his wife behind.

Little Red Riding is already out there, heading to Grandma’s house. On her way she meets the Wolf who is wolf-like in more ways than one. Depp not only alludes to eating her up, and Grandma too, he also comes across as a lecherous chap in wolf’s clothing who is charming, devious and definitely not to be trusted. They are destined to meet again.

Director Marshall has done a great job of using actors who can also sing their own songs and the songs move the story along beautifully without ever feeling forced or out of place. They flow together and seamlessly intertwine with the spoken words. One of my favorite songs is “Agony,” sung by the two handsome princes who can’t understand why their lives have hit a big snag in the romance department. Chris Pine plays the totally charming prince who is sure he is in love with Cinderella.

Unfortunately for him, she has run away, leaving only one golden slipper behind. (Here comes movie gold again–her shoes are golden, not glass.)  The other prince laments the fact that his true love, Rapunzel, is equally hard to get. To be with her he must climb her long, long hair that is really hard on both of them. It’s actually “Agony” times two.

Another song, tinged with melancholy, is “Stay With Me,” sung by Streep as the Witch who tells her daughter that because she loves her so much she has kept her locked away in the tower to protect her from the dangers of the world. My dear editor friend Kathleen said she lost it when the song was being sung because her daughter had just moved into an apartment near her new job. Luckily Kathleen, unlike the Witch, knew how to let go.

In a recent interview Sondheim said the musical is based on two things. “One is about the relationship between parents and children. And the other is about community responsibility.”  It’s a blend that presents the fairytale characters with tough choices as they try to find their way in and out of the woods. “Into The Woods” is rated PG-13.

“Into the Woods” trivia. Here are a few fun facts from a recent LA Times feature by Rebecca Keegan. Before Rob Marshall, another Marshall had considered directing the film version of the popular Broadway show—and that Marshall was Garry Marshall’s sister, Penny. The cast she had in mind included Robin Williams as the Baker, Goldie Hawn as the Baker’s wife, Cher as the Witch, Steve Martin as the Wolf and Roseanne Barr as Jack’s mother.

Fun fact number two. Years earlier Bernadette Peters played the Witch on Broadway. Now Meryl Streep has stepped into the role of the Witch in the Disney film version. According to Sondheim, a wizard with words and music, it was “ordained because the lady who’s played the Witch on stage and the lady who’s  playing the Witch in the movie, their last names are anagrams of each other.” (Streep/ Peters). Wow! Not only can Sondheim compose and write lyrics, he must also be a wiz at word puzzles and Scrabble.

Happy New Year to all of my readers and thanks to Stephen Sondheim, Rob Marshall and  Disney for creating such a masterful movie musical.

‘Pippin’ at Pantages will blow you away with pizazz