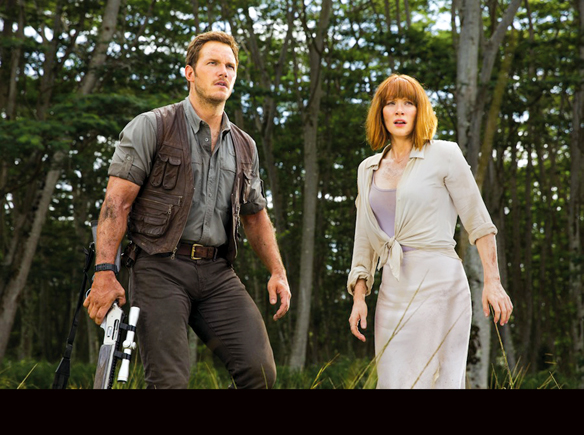 The long wait is over. The blockbuster mega hit of summer, "Jurassic World," has roared into stores and is available in 3-D Blue-ray, Blu-ray, DVD and on demand as of Oct. 20.

This stunning sequel to Steven Spielberg's "Jurassic Park," which we enjoyed more than two decades ago, broke box office records this summer when it scored the highest domestic, international and worldwide opening of all time.

The long wait is over. The blockbuster mega hit of summer, "Jurassic World," has roared into stores and is available in 3-D Blue-ray, Blu-ray, DVD and on demand as of Oct. 20.

This stunning sequel to Steven Spielberg's "Jurassic Park," which we enjoyed more than two decades ago, broke box office records this summer when it scored the highest domestic, international and worldwide opening of all time.

The film takes place 22 years after Jurassic Park opened. Now the attraction is bigger and better, giving guests a chance to experience the thrill of seeing actual dinosaurs.

The current owner wants to make the park even more exciting and has, with the help of scientists, created a new species of dinosaur with savage capabilities.

Unfortunately, this massive creature, even more terrible than the T-Rex, manages to escape, wreaking chaos all across the island. To protect the tourists, Owen one of the trainers (Chris Pratt) and Claire (Bryce Dallas Howard) a park executive, join forces to save island tourists from the escaped prehistoric beast.

The movie keeps you on the edge of your seat, but may be too intense for very young children. However you and the older kids will have a blast.

Bonus features exclusive to Blu-ray include: "Welcome to Jurassic World"— an in-depth look at how the film was crafted and "Jurassic World: All -Access Pass" in which Chris Pratt and director Colin Trevorrow discuss key moments in the film, supported by behind-the-scenes footage. In another segment Chris Pratt gives a tour of the Innovation Center, a museum/exhibit built just for the movie.

In "Jurassic's Closest Shaves" clips from all films in the franchise show "near death" or extremely scary encounters with dinosaurs.

Additional Blu-ray and DVD bonus features include: Deleted Scenes, "Dinosaurs Roam Once Again," a behind-the-scenes look at the film' s visual effects, how the dinosaurs came to life and how the actors filmed scenes. In "Chris & Colin Take on the World," Chris Pratt and the director interview each other and discuss "Jurassic World, as well as the other "Jurassic Park" movies.

It is hard to believe that it's been 50 years since the film version of the Broadway smash hit "My Fair Lady" arrived on the silver screen. Directed by George Cukor, "My Fair Lady" won eight Academy Awards, including Best Picture.

Now five decades after its original release this charming musical, based on George Bernard Shaw's "Pygmalion," is back.

On Oct. 27, generations of movie fans, too young to have seen the musical when it first appeared in theaters, can enjoy this charming story about an elitist linguistic professor, Henry Higgins, played by Rex Harrison, who sings the witty "Why Can't The English Teach Their Children How to Speak?"

On a wager with his colleague Colonel Pickering, Higgins boasts that he can transform a sassy, cockney flower girl Eliza Doolittle (Audrey Hepburn) into the toast of English society. She is reluctant at first, but soon she is tirelessly studying how to speak perfect English and demonstrates her newly acquired abilities as she sings "The Rain In Spain," which according to the lively song lyrics "falls mainly on the plain."

The costumes, designed by Cecil Beaton, are beautiful and the elegant, doe eyed beauty Hepburn knows how to wear them. After the ball where she convinces people she is a princess.

She sings "I Could Have Danced All Night." Another hit, sung by Eliza's cockney dad, is "Get Me to the Church on Time."

The "My Fair Lady: 50th Anniversary Edition" arrives in collectible packaging with an entire Blu-ray disc dedicated to 90 minutes of special features including a variety of original trailers and featurettes that were used in theaters to promote the film, as well as footage from the film's Los Angeles and British premieres in 1964.

The film is rated G and would make a delightful holiday present.

Theatre Update: Two family shows will be coming to the Hollywood Pantages Theatre in early November and December. Opening on Nov. 13 and running through Nov. 22 the delightful Disney musical "Beauty and the Beast" will be in town. The songs are enchanting, and so is the story of a beautiful young girl who wins the heart of a beast who was once a handsome prince.

The little princesses in the clan will want to see this beloved fairytale come to life on stage at the Pantages. The adults will also have a blast as dishes and a suave candelabra sing "Be Our Guest."

This is a perfect holiday theatre package for the entire family to enjoy together.

Next comes the rousing dance musical "Riverdance," which will run from Dec. 1-6 only. This year marks the 20th anniversary of this exciting show which popularized Irish step dancing around the world.

For tickets and information for either production call 800-982-2787or go online to HollywoodPantages.com.

THE LONG VIEW: Communication as easy as 1-2-3… and counting