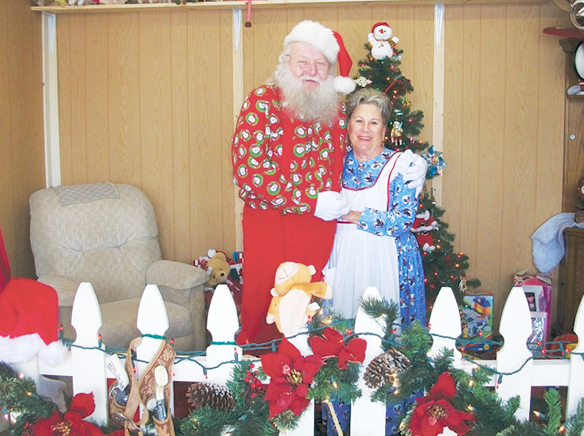 Those are the words of David Stoner, a man who for the past 32 years, has brightened the faces of thousands of children as Santa Claus.

At this time of year, it’s not unusual to see Santa Claus no matter where you look; he’s at the mall, he’s on television, he’s in the movies and sometimes he’ll even show up at your local grocery store, in line to buy a quart of milk.

Those are the words of David Stoner, a man who for the past 32 years, has brightened the faces of thousands of children as Santa Claus.

At this time of year, it’s not unusual to see Santa Claus no matter where you look; he’s at the mall, he’s on television, he’s in the movies and sometimes he’ll even show up at your local grocery store, in line to buy a quart of milk.

But those depictions only show the outside of old Saint Nick. It takes a special person to understand what’s on the inside of Santa Claus and then spread that special warmth and basic goodness to virtually everyone he meets. Stoner is such a person.

“People say, ‘You bring so much joy to so many people,’” Stone said. “But like I tell them. They don’t know the joy it brings me. I get so much more out of it than they do.”

Stoner, 67, currently plays Santa out of his garage, which he recently converted into a Santa’s workshop complete with a Christmas tree, stuffed animals, shoe skates, and board games.

He wanted to recreate the feeling of Christmas during a time when it was about sharing good times with family, as opposed to the commercialized product that it is today.

Stoner’s wife Kathy, who dresses as Mrs. Claus, enjoys watching the smiles on the faces of the children who have already visited them. While Stoner is busy with children as Santa, Kathy helps out by playing hostess to the moms and dads, who can partake of various snacks to go with a steady supply of hot coffee or cocoa.

“Families are excited and they are not being rushed,” she said. “They can come in here and stay as long as they like. They can color or read storybooks.”

In order to create his “Santa’s Workshop,” Stoner went to pawn shops and antique stores looking for old-school toys such as board games and stuffed animals. He even found a Sky King plane pedal car, a toy that was reminiscent of the old Radio Flyer red wagons of the 1930s and ‘40s.

“I wanted the kind of toys that kids could get exercise playing with.”

Inside of his workshop, Stoner has a chair in a corner where he sits and listens to kids tell him what they want for Christmas. As he listens to the children, parents are allowed to take photos free of charge. It’s an arrangement quite different from the experience he had as a mall Santa for the past 32 years.

Working the malls, Stoner was often away from home for six weeks up to two months out of the year, every year as he traveled around working various malls as Santa. Stoner said that as a mall Santa, he could make from $12,000 up to $20,000 for six weeks of work as Santa.

But Stoner grew tired of the travel schedule, which prevented him from being able to spend Christmas Day at home with his wife and enjoy her delicious cooking.

Although the money was good, Stoner says that the malls were not an ideal situation.

For one thing, he was on a tight leash, with limited breaks. He also had so many children in line to talk to him, that he couldn’t spend as much time with each child as he would have liked. However, the biggest difference between his mall Santa experience and now, was the price of the photos.

“Every time that [mall] picture is snapped and I see a family come in and the poor kid’s got ragged shoes with holes in the bottom and they’re paying twenty-five dollars for one picture, that money can go to buy that child a pair of shoes.”

Stoner doesn’t charge for photos, however, if parents want to make a small donation, they can leave some money in a donation jar set aside for charity.

“We’ll never be rich,” Stoner said. “We don’t have any money, but if we can help somebody else out, that’s the name of the game. That’s what Christmas is about.”

And Stoner takes that belief to heart. When he lived in Sioux Falls, South Dakota, he would constantly annoy the manager of a local general store by walking in and buying up whole racks of jackets, gloves, and hats to give to kids he saw walking around that city in the dead of winter with nothing to keep them warm.

It’s clear that for Stoner, Santa is more than just a jolly outfit that he wears at Christmas. For him, it’s a way of living his life.

Stoner said that anyone can put on a red suit but not many people have what it takes on the inside to make a child believe.

“If you don’t have it, you can’t be taught it,” he said, pointing to his heart. “Santa comes from here.”

David “Santa Claus” Stoner will be visiting kids in the 186th Street area Saturday, Dec. 13. He along with the 186th Area Homeowners Association and Neighborhood Watch will meet with children from 5 to 6:45 p.m. between Western and Normandie avenues; and from 6:45 to 8:30 p.m. between Normandie and Vermont avenues.

Children should listen for Christmas music.

Unwrapped toys can also be donated to Fire Station 79, for needy children this holiday season.

Doing nothing can be a great way to spend a vacation...