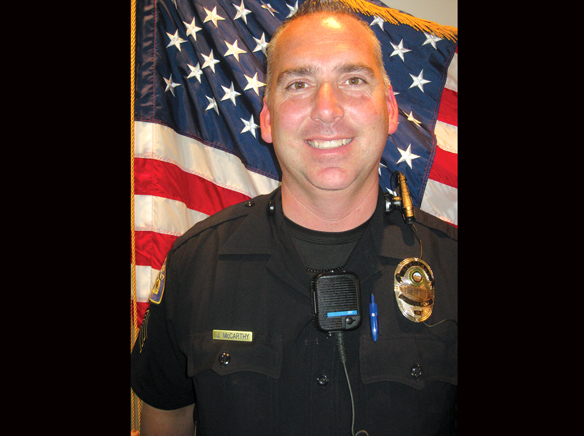 Without realizing it, the man in green had been working on a young James McCarthy for the better part of half a decade.

“It was a poster that I had in my bedroom since I was 13 years old,” McCarthy recalls. “He was a Marine and a tough one at that, a Force-Recon guy, all covered in green camo face paint. I thought he looked cool.”

Without realizing it, the man in green had been working on a young James McCarthy for the better part of half a decade.

“It was a poster that I had in my bedroom since I was 13 years old,” McCarthy recalls. “He was a Marine and a tough one at that, a Force-Recon guy, all covered in green camo face paint. I thought he looked cool.”

Cool or not, the image would take the better part of 5 years to have any effect on the young man from Cerritos. In the meantime, he was admittedly, a bit of a mess.

“I was a bad student during high school, and ditched all the time to go surfing – plus I hung out with some real unsavory characters.”

In one instance, McCarthy realized that he was so far behind in his schooling, that he seized an opportunity to do a ride-along with the police to earn extra credit and get him out of the hole.

“It was fun,” he remembers fondly. “But also crazy. The night I did the ride-along, we busted some of the very guys that I hung out with. That was weird.”

Whether from the boost that doing the ride-along gave to his grades, or by the skin of his teeth, he graduated high school and signed up to attend Cypress Jr. College, finding that he still had no direction in his life. That was when it hit him.

“I was taking basic classes, with no idea of a major or what I wanted to do in my life. One day, I was sitting in psychology class and realized that I had to make a change.”

“I stood up and left class, went to the admissions office to drop out of school, and headed over to the Marine Corp Recruiting Station, where I enlisted on the spot.”

The man in green had finally gotten to him.

One month later he was at MCRD in San Diego for boot camp. And it was here that a bit of the old James McCarthy resurrected it’s mischievous self.

“Like all platoons, we had one guy who was dragging us down and getting the whole unit in trouble. One night, a couple of other guys and myself, “appropriated” everyone’s shaving cream cans. We covered the guy in shaving cream while he slept.”

At one point during the night, the victim woke up and, realizing that he was covered in shaving cream, leaped out of bed and ran to the DI’s door, pounding on it. The DI opened the door, uttered one laugh, then got everyone out of bed to find out who was the culprit.

“We couldn’t help but laugh, and so we fessed up to it,” McCarthy said. “From that point on we were known as the “Shaving Cream Bandits,” and we received a thrashing every chance the DI had to give us one.”

The Shaving Cream Bandits did graduate from boot camp and McCarthy went on to his MOS training of Field Radio Operator in 29 Palms, Calif. It was a great job, and he really enjoyed it. Before long he was transferred to the 3rd. Recon Unit, 7th Comm division, where he handled satellite and microwave communication. It was here that his military career would take a decidedly different course.

“I met a Sargent who had seen duty in the MSG, or Marine Security Guard program, and it sounded like something I would really enjoy, so I applied for it.”

McCarthy was accepted into the program and was sent to Quantico, Virginia for training. The program was rigorous, with a constant cycle of PT, academics, and interview panels. The wash rate was over 80 percent.

McCarthy graduated the program, and felt very proud of being able to buck the curve. Now it was time to put the training to use by guarding one of America’s many foreign embassies – and could be said that the Corp could hardly have picked a worse one.

“I was sent to guard the embassy in Conakry, Guinea in West Africa, which was considered the second worst duty station in the world for MSGs. As soon as I stepped off the plane, I was given a flak helmet and a vest, but no weapon. I was to learn later that we could only have weapons on US soil – the embassy – but not outside. I was scared and nervous, wondering what the heck I had just signed up for.”

He shared a house with four other Marines about three miles away from the embassy, and it was a real hot spot. The fence surrounding the house was eight-feet high, and the windows had steel louvers on them to keep out the gunfire that erupted on an almost nightly basis.

McCarthy survived the duty station and excelled in his assignment, being promoted twice while in Guinea.He H He also was rewarded for his sacrifice by being transferred to Geneva, Switzerland to continue his service. It was a far cry from Guinea.

He mustered out of the service in 1996, and the day after he arrived home, he applied for LAPD, where he was accepted into the academy and served for 14 years. In 2010, James McCarthy transferred to the Gardena Police Department, where he serves to this day.

To nominate a veteran or share your own story, please go to Gardena Honored Veterans website at:http://www.ci.gardena.ca.us/Stories/honored%20veterans.html

Christopher J. Lynch is a Gardena resident and is the author of Eddie: The life and times of America’s preeminent bad boy, an authorized biography of Ken Osmond, the actor who played the unctuous truant Eddie Haskel on Leave it to Beaver.