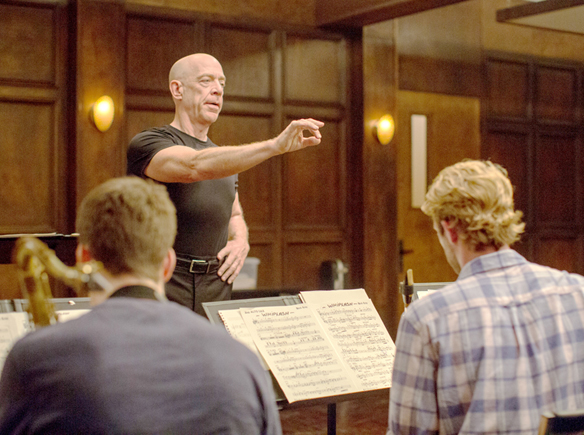 This Sunday, Feb. 22, is a big day for film fans. It's Oscar Sunday. Eight films are in contention for the golden statuette and this category leaves me guessing. However I feel more secure in predicting who I thinks will win in the top acting categories. I base my predictions not only on my hunches, but on the actors who have already won top awards from critics, unions and guilds.

This Sunday, Feb. 22, is a big day for film fans. It's Oscar Sunday. Eight films are in contention for the golden statuette and this category leaves me guessing. However I feel more secure in predicting who I thinks will win in the top acting categories. I base my predictions not only on my hunches, but on the actors who have already won top awards from critics, unions and guilds.

Therefore, since Julianne Moore, star of "Still Alice," has already received a Golden Globe, SAG, BAFTA and Critics Choice Award for her excellent performance, I am certain she will also garner an Oscar. In the supporting actor race I also feel secure in predicting that the Oscar will go to J.K. Simmons for his electrifying performance in "Whiplash" since he too has won a Golden Globe, SAG and BAFTA Award.

Using this same formula Eddie Redmayne will win as best actor for his sensitive, moving portrayal as Stephen Hawking in "The Theory of Everything." And if you haven't seen this Oscar nominated film in theaters, it will be released on Blu-ray and DVD on Feb. 17. The eight films vying for Oscar gold are: "Boyhood," "Imitation Game," "The Theory of Everything," "Foxcatcher," "Birdman," "The Grand Budapest Hotel," "American Sniper" and "Whiplash" which will arrive on Blu-ray and DVD Feb. 24.

My crystal ball is a bit cloudy on this one, but I will venture to say that "Boyhood" and its director, Richard Linklater, will come out on top since the film has received a Golden Globe, a BAFTA and countless accolades from critics. While Clint Eastwood's film "American Sniper" was nominated, he did not receive a directorial nomination. Considered a war movie and an anti-war film as well, "American Sniper" may not take home Oscar gold, but it is a big green winner, earning more bucks at the box office than all the other seven nominees combined.

"Still Alice," a film by Richard Glatzer and Wash Westmoreland, deals with the pain of early onset Alzheimer’s disease. In a career defining performance by Julianne Moore, we watch a brilliant college professor start to lose the power of language and memory. She valiantly struggles to hang on to her skills as a linguist and gifted professor for as long as possible. Her doctor and family are supportive, and through carefully prescribed medications and a constant reliance on her computer and smartphone, she constantly plays games, works puzzles and keeps track of everyday activities.

Her progressive illness is not only devastating for her, but for her family as well. Alec Baldwin, also a college professor, tries to be there for her, as do her three adult children. Her youngest (Kristen Stewart) is an aspiring actress and her career choice is a great worry for her mother who urges her daughter to have an alternate profession to fall back on. While the two love one another, there is friction between them. Their conflicted relationship is a very compelling aspect of this very moving story.

Moore's performance will bring tears to your eyes as she struggles to hang on to everything she holds dear. This is particularly difficult for her since her life's work deals with words and ideas which are slowly slipping away. From Sony Pictures Classics, rated PG-13 for mature thematic material.  ******

"Whiplash," nominated for five Academy Awards, may not win for best picture, but it will most certainly grab an Oscar for J.K. Simmons' performance as the rigid, tough-as-nails music teacher, Terence Fetcher. The story, inspired by the experiences of writer/director Damien Chazelle, deals with a young jazz musician with a passion for drumming. Andrew Neyman, played by Miles Teller, is a 19-year-old student at an elite musical conservatory who wants to become an acclaimed jazz drummer. His dreams seem within reach when he is discovered by Fletcher, who hears him practicing and transfers the aspiring drummer into the top jazz ensemble at the conservatory. Soon the young drummer's passion spirals into obsession as his ruthless teacher pushes him to the brink of his ability and his sanity. Sony Pictures, rated R.

A bonus feature on both the DVD and Blu-ray is a Q&A session at the Toronto International Film Festival with Miles Teller, J.K. Simmons and Damien Chazelle. We find out that the director, at one time an aspiring jazz musician, had a ruthless, terrifying teacher like Fletcher and that experience led to his career change from musician to writer/director. Another DVD plus is commentary with writer/director Chazelle and J.K. Simmons. A Blu-ray exclusive features famous drummers who discuss their craft and passion for drumming.

An interesting tidbit: Did you know that Simmons is the voice of the yellow M&M in the TV commercials?

For all animal lovers who want to preserve the world for all living creatures, consider seeing the Netflix documentary “Virunga" which is in the race for Best Documentary. On February 13 we were given a sneak peek at this haunting work from executive producer Leonardo DiCaprio on KTLA5 and CBS2. The film points out the terrible peril lowland gorillas face in what should be a natural paradise as poachers invade and kill these magnificent, gentle giants. Heroic park rangers in this sanctuary risk their lives every day and many, like the animals they seek to protect, are slaughtered by marauders who have no regard for the earth.

Everyone who loves a good movie, or even a bad one, is familiar with the name Roger Ebert. He was passionate about movies and perhaps the only thing Roger loved more than movies was his wife, Chaz. "Life Itself" which is the title of a film about this well-known movie critic, debuted on DVD on February 17.

Iconic filmmakers including Academy Award winning director Martin Scorsese ("The Departed," "Goodfellas") and Werner Herzog ("Grizzly Man," "Encounters at the End of the World") join Ebert's widow Chaz in a touching celebration of the life of this Pulitzer Prize-winning film critic and social commentator. Based on Ebert's bestselling memoir, "Life Itself," the film is not only personal and funny, but painful and illuminating as well. He was a film critic at the "Chicago Sun-Times" who also hosted a weekly TV show with his partner Gene Siskel, and his lively wit and insights are missed, but not forgotten. "The New York Times" described the film, directed by Steve James ("Hoop Dreams"), as "a work of deftness and delicacy, by turns a film about illness and death, about writing about cinema, and finally and very movingly, a film about love.”