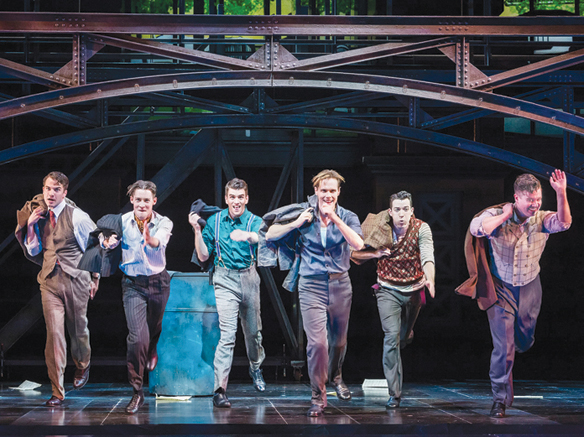 "Harmony," a new musical with music by Barry Manilow and book and lyrics by Bruce Sussman, is a true story based on the German musical group "The Comedian Harmonists," who were international stars in the 1920s and 30s. They toured the world with their musical harmony and comedy until Hitler came into power.

"Harmony," a new musical with music by Barry Manilow and book and lyrics by Bruce Sussman, is a true story based on the German musical group "The Comedian Harmonists," who were international stars in the 1920s and 30s. They toured the world with their musical harmony and comedy until Hitler came into power.

Their story begins in 1927 when an out-of-work actor, Harry Frommerman (Matt Baily) places an ad in a local Berlin newspaper seeking singers so he can form a group similar to the American vocal quintet, The Revelers. We are then introduced to the men who will eventually become The Hamonists as a variety of young singers audition for Harry. They include a former rabbi from Poland, Josef Roman Cykowski (Shayne Kennon), a Bulgarian singing waiter, Ari Leshnikoff (Will Blum), an operatic bass, Robert Biberti (Douglas Williams), a young medical student, Erich Collin (Chris Dwan) and a skilled pianist Erwin 'Chopin' Bootz (Will Taylor), who previously played in a German whorehouse.

Their auditions serve as our introduction to the Harmonists who begin their careers by harmonizing in the tunnels of the Berlin subways, living off of the donations they receive. Add to the mix, Ruth Stern (Hannah Corneau) as the Jewish woman who marries 'Chopin' Bootz and Mary Hegel (Leigh Ann Larkin), a Christian girl who falls in love with the rabbi.

"Harmony” is an obvious labor of love for Manilow who considers the Comedian Harmonists ‘the Beatles of Germany.’ To create the music Manilow spent time in Germany gathering up the music of the period on CDs. He describes the musical contributions of the Harmonists as fantastic, noting that their songs were "emotional, filled with interesting orchestrations. And the singers had their hearts on their sleeves, or they were funny."

"Harmony" is not a Holocaust musical, but in the second act the show does foreshadow the events to come when Hitler bans music with jazz influences created by black personalities. Unfortunately it was the harmony of different races and cultures that blended to make music that was fun, exciting and beautiful.


Hitler's ban on diverse musical styles in 1935 led to the eventual disbanding of the Harmonists, because "the Nazi guidelines prohibited songs composed by Jews, with lyrics by Jews, arranged by Jews or published by Jews," said Manilow.

If such a ban were instituted for Broadway musicals in America, past or present, you can imagine the results since Jewish composers like Gershwin, Berlin, Rodgers and Hammerstein and countless others have added so much to the world's musical heritage.

Like the big splashy musicals of the ‘20s and ‘30s, "Harmony" begins with an overture and is filled with spirited musical numbers that range from the comedic "Your Son Is Becoming a Musician" to the romantic "This Is Our Time" and the tuneful "Harmony" which is reprised several times in Act I. In Act II the music begins with the group singing "Hungarian Rhapsody #20," a comedic blend of classical music and humor performed in the Berlin Philharmonic Hall in 1934 followed by "Come to the Fatherland" performed in Tivoli Park, Copenhagen a few months later.

Then the shadow of censorship descends further on the group and the songs turn darker in tone.

The choreography by JoAnn M. Hunter is playful and fun and the costumes by Tobin Ost are in tune with the period. The diverse sets, also by Ost, add a lot to the show as they morph from a Berlin subway station to various theaters in Berlin, New York and Copenhagen. Tony Speciale directed.

"Harmony," at the Ahmanson Theatre through April 13. Tickets available at the Music Center box office, online at www.CenterTheatreGroup.orgor by calling 213-972-4400. Prices range from $20 to $105.

Thanks to the generous support from the Dan Murphy Foundation LA Opera was able to produce and premiere "Jonah and the Whale" and offer it as a special gift to the local community free of charge. The production was a blend of professional singers and musicians from LA Opera in combination with more than 400 members of the Los Angeles community.

"Jonah and the Whale" was written by composer Jack Perla with a libretto by Verlina Hasu Houston and was directed by Eli Villanueva. LA Opera Music Director James Conlon conducted the orchestra and tenor Matthew O'Neill sang the title role.

The opera, based on the familiar biblical tale, is about overcoming personal fears and the burden of accepting great responsibility. It premiered, appropriately at the Cathedral of Our Lady of the Angels in downtown Los Angeles.

It's not too late to see the final performances of Donizetti's opera "Lucia di Lammermoor"' conducted by James Conlon. The opera asks: "How far would you go to be with the one you love?"

In the opera Lucia is forced to marry a man she doesn't love and the results lead to madness. The final two performances are Sat. March 29 at 7:30 p.m., and a 2 p.m. matinee on Sunday April 6.

A potpourri of DVDs becomes available for summer viewing