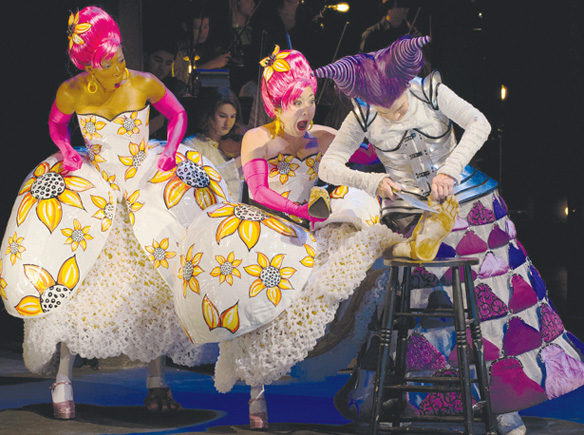 The Oregon Shakespeare Festival production of "Into the Woods" blew into town for an all too brief run, Dec. 7-21 only, but there is still time to see it at the Wallis Annenberg Center for the Performing Arts. The music and lyrics are by Stephen Sondheim, with a book by James Lapine.  In their clever, tuneful musical Sondheim and Lapine take the audience beyond "happily ever after" as a childless baker and his wife head into the woods to reverse a curse that has been placed upon them by the witch who lives next door.

The Oregon Shakespeare Festival production of "Into the Woods" blew into town for an all too brief run, Dec. 7-21 only, but there is still time to see it at the Wallis Annenberg Center for the Performing Arts. The music and lyrics are by Stephen Sondheim, with a book by James Lapine.  In their clever, tuneful musical Sondheim and Lapine take the audience beyond "happily ever after" as a childless baker and his wife head into the woods to reverse a curse that has been placed upon them by the witch who lives next door.

In Act II fairytale favorites like Cinderella. Rapunzel, their charming  princes, Little Red Riding Hood, Jack of beanstalk fame and the baker and his wife are still in the woods, and they are all in real life trouble as they face an angry lady giant who wants to know who killed her husband.

The show begins with the cast on a bare stage, but when they don their costumes from a rack nearby the story comes to life. Then, like magic, this jaunty troupe not only takes us into the wood with them, thy create theatrical magic.  Soon the empty stage is filled with energetic fairytale folk like Milky White, the old white cow Jack has been forced to take to the market and sell.  And that cow (Catherine  E. Coulson), while saying nothing, gets her feelings across quite well.  Coulson is also the lady giant and several other characters as well.  Jeff Skowron plays the Baker and Rachel Warren is his wife.  Miriam  A. Laube is perfect as the witch and Kjerstein Rose Anderson, as Red Riding Hood, is a riot when she throws a tantrum after the hapless baker steals her red cape. The entire cast works beautifully together as they take us with them into the woods.

Sondheim's music and lyrics range from tender and thoughtful to comic and clever.  One of the funniest songs in the show. "Agony,"  is sung by the two Princes (Jeremy Peter Johnson and John Tufts) who lament how difficult it is to be charming, but not sincere. Rapunzel is well played and sung by Royer Bockus, who has nearly gone bonkers after being locked away in a lonely tower for years by her over-protective mother, the witch.  Ah, yes, this fairytale has a dark side.        .

Three titles from Academy Award winning animator Hayao Miyazaki are now available on Blu-ray + DVD Combo Packs–”Princess Mononoke,” “The Wind Rises” and “Kiki’s Delivery Service,”  Any one, or all three, would make a perfect holiday treat.

“Princess Mononoke,” considered Miyazaki’s masterpiece, is the story of a young warrior named Ashitaka (voiced by Billy Crudup) who has been inflicted with a deadly curse.  In order to save his life, Ashitaka goes into forest to search for a cure. Once inside the forest he becomes entangled in a bitter battle that pits Lady Eboshi (Minnie Driver) and a proud clan of humans against the forest’s animal gods who are led by the brave Princess Mononoke, a young woman raised by wolves.  Rated PG-13 for images of violence and gore.

“The Wind Rises” is the dazzling tale of a young man named Jiro who dreams of flying and designing airplanes. Unfortunately, Jiro is nearsighted and therefore unable to become a pilot. However he is able to become one of the world’s most accomplished aircraft designers.  His story is an epic tale of love, perseverance, challenges and choices in a turbulent world. The English voice cast includes Joseph Gordon-Levitt, John Krasinski, Emily Blunt, Martin Short, Stanley Tucci, Mandy Patinkin, William H. Macy and Elijah Wood. Rated PG-13 for some disturbing images and smoking.

Youngsters will enjoy “Kiki’s Delivery Service,” a magical coming-of-age story full of magic, adventure and self-discovery.  Kiki, an enterprising young girl, must follow tradition if she wants to become a real witch.  To achieve her dream she flies off to a far away city with only her black cat Jiji. In no time she sets up a high-flying delivery service. Soon she learns all about responsibility and experiences independence as she find her special place in the world. The English speaking voice cast includes the talents of Kirsten Dunst, Phil Hartman as Jiji the cat, Janeane Garafalo and Debbie Reynolds.

”A Golden Christmas Triple Feature” contains three stories about golden retrievers.  In the first story a nine-year-old boy and girl bury a time-capsule of keepsakes with golden retriever by their side.  Then the two go their separate ways. Years later, a case of mistaken identity has them competing for the same childhood memories at Christmas time.

In “The Second Tale,” Lisa’s neighbor’s golden retriever Jake and his three new puppy playmates bring Lisa and her life-long friend David back together again.  Everyone knows these two are destined to be together, but at this point in time, David is engaged to someone else.

In the third story, two golden retrievers and a fun-filled theater production of “A Christmas Carol” bring Heather and a young naval officer together.  The trilogy, from  Cinedigm, is not rated.

Also from Cinedigm, “10 Movie – Family & Romance Collection.”  This  DVD contains ten movies (3-discs with ten holiday stories.)  Lots of fun for a family holiday marathon of holiday Christmas magic.  Each story is about the spirit of the season as friends, sweethearts and family members reconnect.