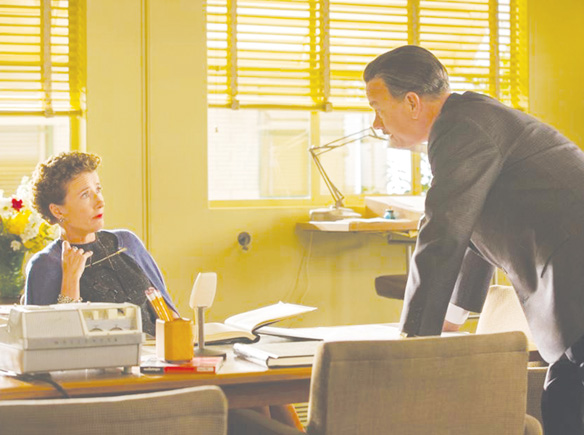 Disney's "Frozen" arrived on Blu-ray and DVD March 18. This delightful animated film, based on a Hans Christian Andersen fairytale, was given a Disney twist and the results were a global success.

Disney's "Frozen" arrived on Blu-ray and DVD March 18. This delightful animated film, based on a Hans Christian Andersen fairytale, was given a Disney twist and the results were a global success.

The story revolves around sisterly love and two young girls’ strong bond. There is comedy, much of it provided by an endearing snowman named Olaf (Josh Gad, Broadway's "Book of Mormon"), who will melt your heart as he makes you laugh and a reindeer with the endearing personality of a Labrador retriever.

And the original songs by Kristen Anderson-Lopez and hubby Robert Lopez (Tony Award winner "The Book of Mormon," "Avenue Q") include the Oscar winner "Let It Go" which is belted out by Idina Menzel (Broadway's "Wicked.")   When everything goes frigidly wrong in the kingdom of Arendelle, Elsa (Idina Menzell) flees, leaving her sister Anna (Kristen Bell, Showtime's "House of Lies") to rule since Elsa's icy powers have trapped her beloved kingdom in perpetual winter. Feisty baby sister Anna storms after Elsa, aided in her quest by a spirited young mountain man, Kristoff (Jonathan Groff, Broadway's "Spring Awakening") and his wise and funny reindeer pal.

The two-disc Blu-ray Combo Pack (Blu-ray + DVD + Digital copy) has an abundance of bonus features that include: "The Making of Frozen," "D'frosted: Disney's Journey from Hans Christian Andersen to Frozen" and much more. Both the Blu-ray combo and DVD feature an original theatrical short "Get a Horse," a "Let It Go" Music Video with Demi Lovato and the "Frozen" Teaser Trailer.

The film is rated PG for some action and mild rude humor.

Youngsters will be hippity-hoppity happy with Disney's "Winnie the Pooh: Springtime with Roo" the bouncy baby kangaroo. This marks the first time this film is presented in the Blu-ray format for home-viewing enjoyment. This is also a perfect gift to pop into that Easter basket since there is an Easter theme to the story.

Every year Rabbit plays the Easter Bunny in the Hundred Acre Wood, but this year he decides it's "Spring Cleaning Day," so instead of the usual festivities he orders everyone to scrub, dust and mop. Naturally all his pals are disappointed, especially little Roo, the baby of the bunch. Finally, in this egg-stra sweet little tale, Rabbit realizes that putting others first is what really matters. Once again love, hope and friendship are in full-bloom in the Hundred Acre Wood in this holiday friendly Blu-ray treat.

Now in stores, as of March 11, "Springtime With Roo" includes "Get Up and Dance!" where kids and families can get into the spirit of Easter by dancing to Rabbit's Easter Song. Rated G.

While "Saving Mr. Banks" wasn't nominated this year, it was one of my favorites films in 2013. It tells the behind-the-scenes story of what happened when Walt Disney (Tom Hanks) sets out to film "Mary Poppins" based on the books of author P. L. Travers (Emma Thompson). Thompson's performance is spot on, but unfortunately she did not receive a well-deserved Oscar nomination.

“Mary Poppins" became one of Disney's most beloved adaptations, but it took him 20 years to convince Travers to let him make the movie because she was certain he would turn her work into sentimental mush. From the very beginning she put all of her demands, rules and restrictions on tape so there would be no misunderstandings. In fact at the end of the film you will see an old-fashioned tape recorder playing the actual orders from Travers in her own voice.

Emma Thompson does a marvelous job of creating a stubborn, determined woman who felt that her characters were like family. And we find out that many situations in her work were inspired by her own early years and her love for her father (Colin Farrell) who was a charming alcoholic.

When I asked Richard Sherman if she was really as difficult in real life as she was in the film, he smiled saying, "She was worse." What is so wonderful about Thompson's performance is the way she makes us care about this woman who was almost impossible to work with. And Hanks also does a fine job as Walt, who was warm, down-to-earth, but determined to film "Mary Poppins" for his two daughters who loved all of Travers’ books. The characters in the film are real with the exception of Paul Giamatti (TV's "John Adams") who serves as Travers' chauffeur throughout. He gives the author a sounding board, allowing her to show us her softer side. Disney's "Saving Mr. Banks" is rated PG-13.  Blu-ray and Digital HD bonus features include "The Walt Disney Studios: From Poppins to Present" in which director John Lee Hancock takes viewers on a tour of the Disney studios.