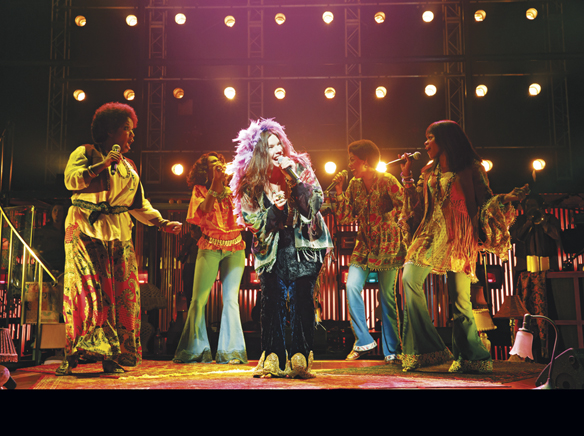 Before the pulsating rock musical, "A Night With Janis Joplin," went to Broadway it was presented at the Pasadena Playhouse, starring Mary Bridget Davies in the title role. Davies, nominated for a Tony for her masterful performance, is back in Pasadena once again as the rock and blues superstar, Janis Joplin.

Before the pulsating rock musical, "A Night With Janis Joplin," went to Broadway it was presented at the Pasadena Playhouse, starring Mary Bridget Davies in the title role. Davies, nominated for a Tony for her masterful performance, is back in Pasadena once again as the rock and blues superstar, Janis Joplin.

The show, created, written and directed by Randy Johnson, was a phenomenal success in regional theater before it opened on Broadway on Oct. 10, 2013, and Johnson is grateful for the input he received from Joplin's brother Michael and sister Laura. Both, according to Johnson, "shared their stories and provided a rare insight into their sister's life."

“Joplin,” a musical journey, not only celebrates the singer's contribution to music, it honors her musical influences as well.

The show is filled with music and Act I ends with a rousing "Spirit in the Dark" sung by Bessie Smith, Aretha and Janis along with the Joplinaires.

Also in Act I there are two versions of Gershwin's "Summertime," sung by Blues Woman and Joplin as separate solos. There are many songs that include "Stay With Me," "Cry Baby," "Me and Bobby McGee," and of course "Mercedes Benz," belted out by Joplin.

She also toured as a vocalist with Joe Cocker, Luis Miguel and Big Brother and the Holding Co.
"A Night With Janis Joplin," at the Pasadena Playhouse, 39 S. El Molino Ave,, Pasadena, runs through Aug. 16. Tickets and information: PasadenaPlayhouse.org or by phone at 626-356-7529.
**

For summertime viewing on DVD check out "House of Cards: The Complete Third Season" which debuted on DVD and Blu-ray on July 7. The series stars two-time Academy Award winner Kevin Spacey ("American Beauty," Best Actor in a leading role, 1999 and "The Usual Suspects," Best Actor in a supporting role, 1995) as Frank Underwood. Robin Wright co-stars as his wife Clair Underwood. Both stars won Golden Globe Awards for their performances in the series.

In Season Three the shock waves continue as the most powerful couple in the world moves into the White house, with Frank and Claire fighting to defend a legacy they have been working a lifetime to build. The Blu-ray and DVD bonus featurette: "Backstage Politics: On the Set of House of Cards" is an extensive behind-the-scenes look into the creation of "House of Cards: Season 3." A Blu-ray exclusive featurette is "A Death in New Mexico" that chronicles the surprising Chapter 39. The Third Season contains chapters 27-39. Not rated, from Sony.
***

"Ex Machina," written and directed by Alex Garland ("28 Days Later" and "Dredd') is a thought-provoking sci-fi thriller that echoes the "Frankenstein" monster tale about a thinking creature created in a laboratory. In this case the non-human entity is a beguiling, seductive cyborg named Ava (Alicia Vikander).

As the story begins a young programmer, Caleb Smith (Domhnall Gleeson), has just won a competition. The prize is the chance to spend one week at the secluded mountain estate of his company's brilliant CEO (Oscar Isaac).

But there is more to this visit than Caleb was led to believe. It turns out he has been selected to take part in a study of artificial intelligence. If he accepts the challenge, he will be sworn to secrecy about everything that happens during the one-week study. The film raises questions about consciousness, ethics, and responsibility in a technological age.

There is a five-part featurette included entitled "Through the Looking Glass: Creating Ex Machina," and a Q & A with cast and crew. From Lionsgate, rated R for graphic nudity, language, sexual references and some violence. .

It's hard to believe that Joan Rivers is no longer with us, poking fun at just about everything from politics to fashions. But before she took to the red carpet with daughter Melissa she hosted "That Show with Joan Rivers," and now 29 episodes from her first season are available on DVD.

The half-hour show was one of the first syndicated daytime talk shows on TV and was produced by Joan and her husband Edgar. Each show included a monologue by Joan before featuring a celebrity and an 'expert' guest tackling a particular subject with hilarious results.

Helping Hands gets a lift in week one