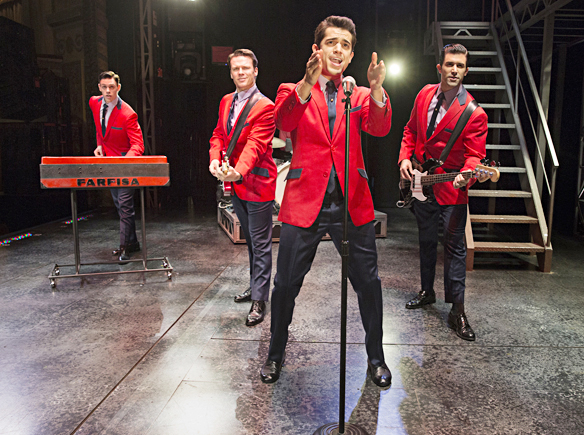 "Jersey Boys" won the Tony, Grammy and Olivier Awards in 2006 as the Best Musical of the year. The smash hit, a blend of drama and music, chronicles the rise to fame of Rock and Roll Hall of Famers "The Four Seasons: Frankie Valli, Bob Gaudio, Tommy DeVito and Nick Massi. These four blue-collar Jersey Boys went on to become one of the greatest successes in pop music history as they wrote many of their own songs, invented their own sounds and sold 175 million records worldwide­—all before they were 30.

"Jersey Boys" won the Tony, Grammy and Olivier Awards in 2006 as the Best Musical of the year. The smash hit, a blend of drama and music, chronicles the rise to fame of Rock and Roll Hall of Famers "The Four Seasons: Frankie Valli, Bob Gaudio, Tommy DeVito and Nick Massi. These four blue-collar Jersey Boys went on to become one of the greatest successes in pop music history as they wrote many of their own songs, invented their own sounds and sold 175 million records worldwide­—all before they were 30.

The show opened at the Ahmanson Theatre here in Los Angeles, then after a successful run it moved to New York where it won the Tony. Since then the show has played in Las Vegas and was filmed by Clint Eastwood.

Now it's back in Los Angeles at the Hollywood Pantages for an all too brief run through Oct. 19 only. This marks the third time I've seen the show on stage and to my surprise and delight this return engagement is as fresh and vibrant as the first time I saw it at the Ahmanson.

On opening night, Oct. 5, the audience leaped to their feet to give the performers a standing ovation and broke into even louder cheering when Frankie Valli came out on stage to take a bow with the excellent cast.

Next on the Pantages agenda is Stephen Schwartz' hit musical "Pippin," the 2013 Tony Award winner for Best Musical Revival. Actor John Rubinstein originated the role in the 1972 production. He returns to this career changing show 40 years later, now stepping into the role of King Charles. John also played the "The Wizard" in the 2 year run of another Stephen Schwartz hit musical, "Wicked."

"Pippin" will celebrate its Hollywood Pantages premiere with a limited three week engagement running from Oct. 21 to Nov. 9.

What's New on DVD—On Oct. 7 "Edge of Tomorrow," starring Tom Cruise and Emily Blunt, was released on Blu-ray, DVD and Digital HD from Warner Bros. Home Entertainment. This sci-fi adventure was directed by Doug Liman ("The Bourne Identity," "Mr. & Mrs. Smith") and is based on the novel entitled "All You Need Is Kill" by Hiroshi Sakurazaka.

The story takes place in a not too distant future in which an alien race has hit the earth with an unrelenting assault and it seems that no earthly military can halt their onslaught. Tom Cruise enters the scene as Major William Cage, an officer who has never seen a day of combat. Suddenly he is thrown into a time loop where he fights the same creatures over and over.

As a result he repeats the same battle and dies on a daily basis. But each time he encounters these brutal aliens he does so with an increasing skill as he battles them along with Special Forces warrior Rita Vrataski (Blunt).

Like the comedy "Ground Hog Day" the same day is repeated over and over, but each time the major learns something new about how to handle the enemy before he dies and lives again to fight another day.

As he lives, dies, and repeats the same fierce battle he learns a lot, but will it be enough to halt the advance of this creepy alien horde?

The DVD and Blu-ray releases contain plenty of additional features like "Weapons of the Future" and "Creatures Not Of This World" plus much, much more. The film is rated PG-13 for intense sequence of sci-fi action and violence, language and brief suggestive material.

"Sharknado 2: The Second One," while totally ludicrous and improbable, is great fun as a Category 7 hurricane pummels New York. As a result, the surging floodwaters and storm violence bring thousands of sharks into the atmosphere. Soon the flying sharks are dubbed by newscasters like Matt Lauer and weatherman Al Roker as a "Sharknado."

While the plot is ridiculous, it is also ridiculously amusing with cameo appearances by such personalities as Kelly Osbourne as a flight stewardess and Billy Ray Cyrus as an MD.

The movie stars Ian Ziering ("Beverly Hills, 90210), Tara Reid and Vivica A. Fox. Too violent for the very young, but teens will find the absurdity of the whole situation amusing.