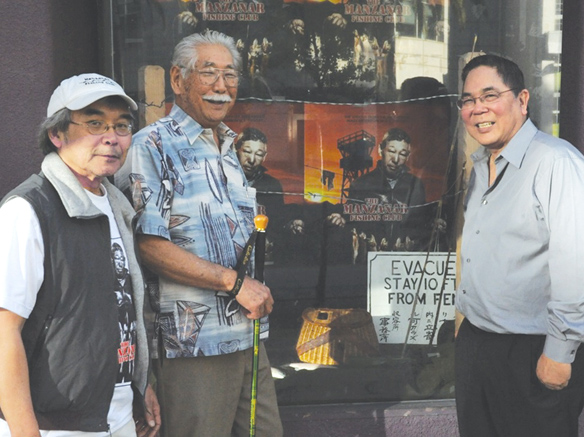 "The Manzanar Fishing Club," the acclaimed documentary film about fishing and freedom set in a World War II internment camp, is returning to the Fred Hall Show March 5-9 in Long Beach. The emphasis this year will be to help in the creation of an educational package that would allow the film to be distributed to schools.

"The Manzanar Fishing Club," the acclaimed documentary film about fishing and freedom set in a World War II internment camp, is returning to the Fred Hall Show March 5-9 in Long Beach. The emphasis this year will be to help in the creation of an educational package that would allow the film to be distributed to schools.

"We've had a long and gratifying relationship with the Fred Hall Show," said Cory Shiozaki, the film's director and co-producer. “And it's so appropriate that we'll be coming back this year to help us get into the classroom. So many of our milestones have occurred at Fred Hall."

The tie between "The Manzanar Fishing Club" and the Fred Hall Show goes back to 2009. “This is a fascinating story,” recalled Western Outdoor News editor Pat McDonnel.

“After I saw the exhibit at the Manzanar Interpretive Center as part of the Opening Day festivities in the Eastern Sierra [in 2008], I felt this had to be written about and brought to the Fred Hall Show,” McDonnel said. “I mentioned it to Bart Hall, the producer of the show, and he agreed. We're both proud to bring this story, and part of our fishing heritage, to the Long Beach show.”

"The Manzanar Fishing Club" has been a part of four of the last five Fred Hall Shows in Long Beach, each time marking a new step forward in the progress of the project. The debut in 2009 introduced the documentary project to the fishing community at large with a spectacular exhibit featuring faux barracks walls festooned with vintage photographs, maps and tackle, most of it from the 1940s.

The next show, in 2011, highlighted the project as the movie neared completion. Clips were shown, and the community's appetite was whetted. The major role of the Fred Hall Show was demonstrated a year later when the World Premiere of the completed movie was held at the Cinemark at the Pike theatre within walking distance of the Long Beach Convention Center as the 2012 festivities were underway. Last year, the full-length DVD was introduced to the fishing community.

"A year after our theatrical release and the DVD, we want to assemble a special educational package to take the movie to schools across the country to tell this different side of the Japanese-American Internment during World War II," Shiozaki said. "This is a natural next step in our attempt to preserve this valuable story."

A rousing and quirky film that tells the story of the World War II Japanese American Internment through the eyes of internees who all shared a love of fishing, "The Manzanar Fishing Club" relates a personal side of the history, set against the larger saga of the Japanese community's imprisonment and persecution during the war. "This is something that is currently missing from the textbooks," Shiozaki said.

“We've always felt that we could do the most good as part of school curricula,” Shiozaki added, “and we're ‘officially’ kicking off our campaign to produce a schools package at Fred Hall this year.

“This is quite an undertaking beyond just making the movie and DVD. In order to be accepted by schools, we'll need to develop lesson plans, produce background support materials and on and on. Specialists familiar with educational parameters will almost certainly be needed,” Shiozaki continued, “and so we'll once again embark on a fundraising odyssey.

“We made the film with grants from non-profit entities and support from our public well-wishers, and that's what we'll do again,” Shiozaki concluded. “We'll have a "Bake Sale" at Fred Hall–DVDs and brand new T-shirts and caps—and I'm sure we'll think of more things to come.”

This year's booth will be located in the Lobby area between the main Exhibit Hall and the Arena. Mammoth Lakes Tourism is sponsoring "The Manzanar Fishing Club" booth again this year.

"We have special ties with the Eastern Sierra, and we are always pleased to work with such great people," Shiozaki added.