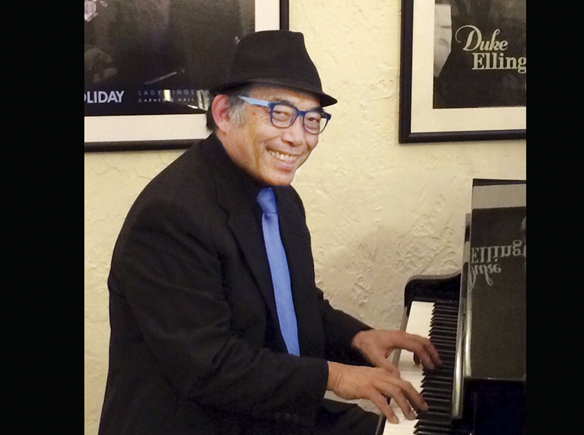 Musician Richard Ihara is a man who has found it quite easy to slide between the old and the new.

For some, not only singing, but conducting, producing, and arranging music that varies from big band to today’s rock would be too big of a stretch. But for the Ihara, 62, it’s just another day at the office.

Musician Richard Ihara is a man who has found it quite easy to slide between the old and the new.

For some, not only singing, but conducting, producing, and arranging music that varies from big band to today’s rock would be too big of a stretch. But for the Ihara, 62, it’s just another day at the office.

The July 12 show will also feature The Tex Beneke Orchestra, with a tribute to Glenn Miller.  The Mills Brothers and the Island Crooners will share vocal duties. And Mary Kageyama Nomura, the Songbird of Manzanar, will make a special guest appearance.

Ihara said hegrew up around music. His mom loved to dance and as a small child, he developed what would be a lifelong love of music

Later, at Peary Junior High School and Gardena High, he played several other instruments while developing his musical arrangement and writing skills.

Something that Ihara said helped him as he was developing his love of music was seeing it done in person, a practice that he says has declined in recent years.

Although he has embraced the current digital age of music, working with live performers on stage in front of an audience has always been what he has done best and where he true talent lies.

With a career spanning more than 40 years, Ihara has worked closely with several of the greats in the music industry including singer Ron Townson of the 5th Dimension, Al Wilson, Liza Minnelli, and the Captain & Tennille.

However, Ihara has been most closely associated with R&B jump blues saxophonist Big Jay McNeely, with whom he has developed a close working relationship. In fact, the duo have album set to be released later this summer through independent label Cleopatra Records on vinyl, not CD.

Just as Ihara has embraced the big band sounds of such artists as Louis Armstrong as well as the jazz blues styling of Big Jay McNeely, he has also embraced the medium that put those sounds on the map—vinyl.

Ihara likes that music is becoming popular on vinyl records again because of the better sound quality as well as the fact that a younger generation has discovered why old-fashioned vinyl records were so popular in the first place.

“Younger people are going toward vinyl because they like the warmer sound and the collectability and they don’t like the cold digital sound,” Ihara said. “ I feel that with this record, I’m reaching another audience.”

Ihara said the as-yet unnamed album came into being when producers of the 2013 period film “Gangster Squad” were looking for period-appropriate music and came across Cleopatra Records. From there, they discovered Big Jay’s music and had him contribute three songs to the film’s soundtrack.

With certain media such as vinyl becoming popular again and with other more common media such as CDs becoming relics, in favor of music streaming, Ihara believes that the music industry as a whole is in a state of flux. He says music will continue to evolve and that embracing the changes in current music as well as paying homage to the musical genius of the past will be the key to ensuring that everyone will have something to love about music.

“I think music does touch the soul and hopefully by doing things that resonate, that we are going to allow people to hear things and feel things and relate to people on a level that they never would have before,” Ihara said.

During his career, Ihara has traveled worldwide playing music. From playing Carnegie Hall in New York to his travels to Japan, Canada, and the Caribbean, Ihara has seen and experienced what most can only dream of. But despite that, he still claims Gardena as his only home.

While in high school, Ihara played with a local big band group called the Fabulous Esquires. Surprisingly, the band is still active as a non-profit organization that gives young people the opportunity to learn and play big band music.

In fact, they rehearse every Tuesday night at the First Baptist Church in Gardena. Ihara still maintains his association with the group, as he is currently in talks with the organization to partner on a special musical project.

Just as Ihara has always slid between the old and the new when it came to music, he has done the same when it comes to talking about his home.

Having grown up in Gardena, Ihara has been excited to see the changes to the city over the years. He fondly remembered watching the action with his brothers at the Ascot Raceway. He also remembered when the Artesia shopping center featuring El Pollo Inka was nothing more than a swamp.

Presently, Ihara performs with the 88-year-old Big Jay McNeely at the Cedar Creek Inn in Brea, where he does a spot-on impression of Louis Armstrong while Big Jay backs him up on his saxophone. The act is so popular that he and Big Jay are in discussions to create an entire album of songs done in Louis Armstrong’s voice as a way to honor the legendary jazz musician.

Ihara says this idea is his way of creating what he calls a “new old favorite” which is very fitting and a perfect way to describe his career thus far. Having taken what’s worked in the past with his big band appreciation and fused it with his embracing of R&B and rock music, Ihara has created the ultimate combination, which should keep him on top of the music scene for years to come.

For information about the July 12 Great Nisei Reuion II, call 310-627-7272 or log on at www.StonebridgeEntertainment.com

Walking: A step in the right direction toward better health

THE LONG VIEW: Fall season brings its charm, before the...