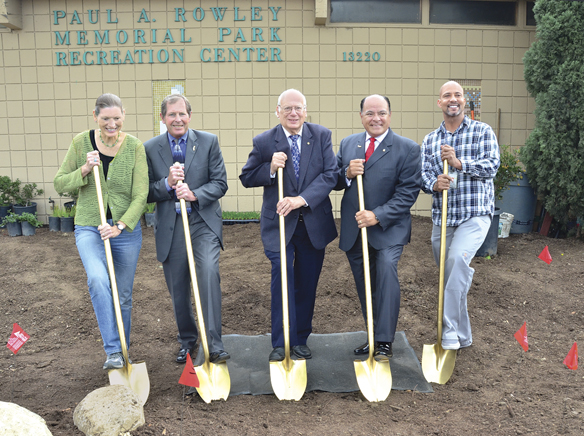 Rowley Memorial Park is turning green with each passing day. Ecologically speaking that is.

A new, water-saving garden has been created at the park. And the design of the landscape will capture “more than 1,000 gallons of rain water,” officials said.

Rowley Memorial Park is turning green with each passing day. Ecologically speaking that is.

A new, water-saving garden has been created at the park. And the design of the landscape will capture “more than 1,000 gallons of rain water,” officials said.

“We are excited to break ground on another Ocean Friendly Garden in West Basin’s service area,” Dear said. “As we face one of the worst droughts on record, we hope that other community organizations and our community members take this garden concept and incorporate it into their facilities and homes to continue to increase their water conservation efforts.”

The 2,094-square-foot garden will feature drought-tolerant plants that thrive in dry climates and will save up to 80 percent of the water previously required for landscaping. The water-saving garden is designed to capture 1,166 gallons of rainwater by capturing it in the basins instead of incurring runoff.

“This Ocean Friendly Garden marks a huge stepping stone for the City of Gardena as the city’s first water conserving garden at a City facility,” Medina said. “We commend all the organizations involved for making this happen for our City. We are also looking forward to maintaining this great garden and allowing our residents to learn first-hand how these gardens can make a significant water-saving difference in midst of this drought.”

The OFG program is part of West Basin’s Water Reliability 2020 program, which aims to reduce dependence on imported water to only 33 percent by 2020 by doubling water recycling, doubling conservation efforts and adding ocean-water desalination to a local, diverse water supply.

Programs such as the OFG allow West Basin to work toward its water efficiency goals by reducing the amount of water used outdoors (the leading water-loss practice in residential communities). This garden was funded by the City of Gardena, the Department of Water Resources, Golden State Water Company, and the Water Replenishment District.

West Basin Municipal Water District is a wholesale water district that serves nearly a million people in 17 cities and unincorporated areas throughout its 185-square mile service area. West Basin is reducing its dependence on imported water through its Water Reliability 2020 program that will double conservation, double recycled water production and add desalted ocean water to its portfolio by the year 2020.. 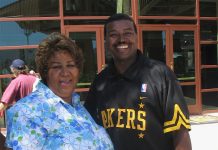