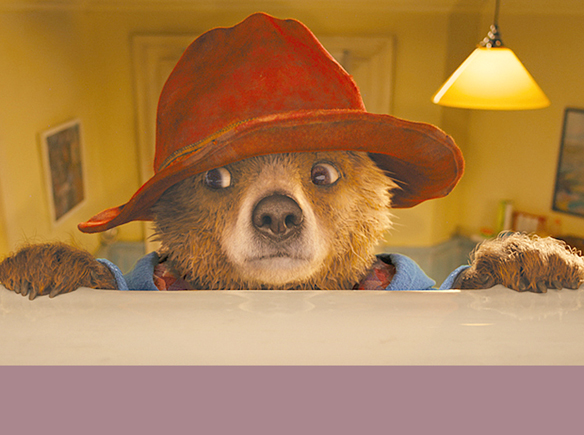 “Paddington,” from the producer of “Harry Potter,” is a movie for the little kid in all of us.  Based on the children’s books by Michael Bond, the film tells the story of a little Peruvian bear who comes to London in search of a new home.  He is told by his Uncle and Aunt that the people in London are very friendly and will welcome him upon his arrival.

“Paddington,” from the producer of “Harry Potter,” is a movie for the little kid in all of us.  Based on the children’s books by Michael Bond, the film tells the story of a little Peruvian bear who comes to London in search of a new home.  He is told by his Uncle and Aunt that the people in London are very friendly and will welcome him upon his arrival.

All three bears planned to visit London someday.  They just never got around to going.  But when a big earthquake rattles their world and destroys their tree home, the young bear’s aunt decides it’s time for Paddington to sail away to London on his own.  She assures him he will find a new family who will love and care for him.  She packs him a basket filled with jars of marmalade and takes him to the port where he stows away in a lifeboat.

Upon his arrival he does everything his Auntie told him to do, politely saying ’hello’ to everyone, but things don’t go well until he is noticed by the Brown family, headed by Hugh Bonneville (the lord of TV’s “Downton Abbey.”) He tells his wife and children that the bear can only stay overnight, and must be placed in the morning.  But it doesn’t take long for the family to care about this little bear with the big, soulful eyes.

Paddington gets into all sorts of trouble, mainly because he doesn’t understand how things work in a civilized home. For example, water in the tub turns on, but he doesn’t know how to shut it off.  Despite his misadventures, Mrs. Brown is determined to help Paddington find the English explorer who befriended his family in Peru and taught them all how to speak.

Dressed in his hat from home, plus a little blue coat given to him by Mrs. Brown, Paddington and Mr. Brown go to the library to try to locate the professor, a noted explorer, but to their surprise there is no information available. The reason why is all part of the story.

Things really go wrong for the little bear when Nicole Kidman, a taxidermist, learns of his arrival in London.  In no time she sets out to trap him.  At this point the story takes all sorts of twists and turns as the family tries to help Paddington find his explorer friend. And things go really wrong when Nicole tracks Paddington down.  Will he be able to get away from her diabolical clutches?

Along with the jeopardy there is plenty of fun as the family starts to become attached to the warm hearted, trusting little bear from Peru.

“Paddington,” rated PG for some mild action and rude humor, is a charming film the whole family can enjoy together.

Critics, myself included, have been roaring about this delightful little romp. Rolling Stone calls it “Irresistible and funny,” Los Angeles Times says it’s “Wondrous” and I join the chorus of praise by adding “It’s adorable.”

The story is woven together by about 20-25 pop songs from the ‘60s and ‘70s with hits from like "Can't Help Falling in Love" and "Sugar Pie, Honeybunch" which will be more familiar to the older crowd than to the kids. The plot is a bit like "A Midsummer's Night Dream" with a love potion that causes the fairies to fall in love with the first creature they see if they are sprinkled with it. There's a moral of sorts woven into the not so stimulating plot which is: Beauty, like love, is in the eyes and hearts of the beholder. Evan Rachel Wood voices the heroic warrior fairy princess. Rated PG.

On Feb. 24 "Big Hero 6," nominated for an Oscar, will be available on Blu-ray and DVD. The action packed comedy drama introduces us to Baymax, a lovable, healing robot who forms a personal bond with a young robotics prodigy named Hiro Hamada. The Blu-ray combo pack comes with oodles of extras that include the charming animated short “Feast,” The Origin Story of "Big Hero 6," Gag Animation and much more. Rated PG for action and peril and some rude humor.

"Alexander and the Terrible, Horrible, No Good, Very Bad Day," with a title almost as long as the movie, is lots of fun for kids of all ages. Based on the best-selling book of the same name by Judith Viorst, it follows the misadventures of Alexander who has the worst day of his young life at school. He wonders if he is the only one in his family to have such bad luck and the very next day his whole family undergoes their own terrible day. The film stars Steve Carell and Jennifer Garner as the parents with Ed Oxenbould as Alexander. The Blu-ray has plenty of bonus features like "Snappy Crocs & Punch Roos: The Australian Outback Party," plus bloopers, "Walkabout: A Video Diary" and more. Rated PG.

"101 Dalmatians Diamond Edition" comes with an all new short "The Further Adventures of Thunderbolt," plus Walt Disney presents "The Best Doggoned Dog in the World" (1961 Version) and much, much more. In this animated classic the awful Cruella de Vil steals a family of dalmatian puppies. Her goal is to turn the little tykes into a spotted fur coat. When they are dognapped their parents and the dogs of London band together to rescue them before it's too late. Rated G.

Both "Alexander" and "101 Dalmatians" are already out on DVD as of Feb. 10 and would be a lovely gift for the little Valentines in your life.

Jazz Fest donation is music to the ears