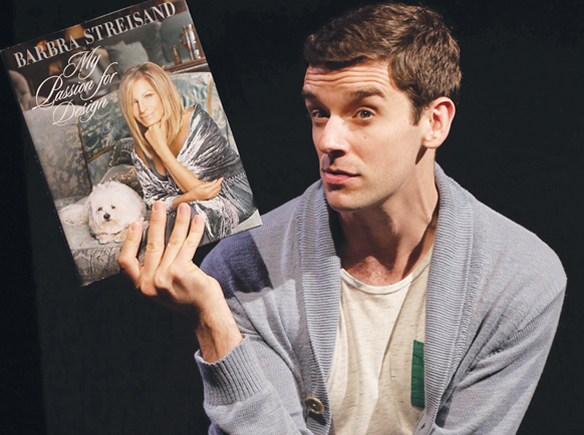 “Buyer & Cellar,” written by Jonathan Tolins, directed by Stephen Brackett and starring Michael Urie, is —in a word—hilarious. The idea for this totally original comedy concept came to playwright Tolins after reading Barbra Streisand’s 2010 coffee table book “My Passion for Design,” with photographs by the diva as well.

In her book she showcases all the treasures in her estate home and in her very special basement that contains a movie-set-like street of shops that house her collection of dolls, costumes and antique furniture.

“Buyer & Cellar,” written by Jonathan Tolins, directed by Stephen Brackett and starring Michael Urie, is —in a word—hilarious. The idea for this totally original comedy concept came to playwright Tolins after reading Barbra Streisand’s 2010 coffee table book “My Passion for Design,” with photographs by the diva as well.

In her book she showcases all the treasures in her estate home and in her very special basement that contains a movie-set-like street of shops that house her collection of dolls, costumes and antique furniture.

Since her collection of stuff was so overwhelming she created this fantastic cellar of faux shops to showcase all the great acquisitions that wouldn’t fit comfortably in her fabulously extravagant Malibu home.

This much of the story is true, but everything else is the product of Tolins’ fertile imagination says Urie before he steps on stage and into his many roles in this off-Broadway hit that has finally arrived in L.A.

And the opening-night audience laughed it up, enjoying all the local references as well as the little jabs aimed at mega-star Babs, who is one of the characters in this one-man tour de force.

Urie has performed in countless theatrical roles, but may be most familiar to audiences as Marc St. James on TV’s “Ugly Betty.”  In “Buyer & Cellar” he glides like “buttah” from one character to another as he plays Alex More, an out-of-work actor hired to be the pretend manager of the mall shops in the ‘cellar,’ Alex’s judgmental boyfriend and confidant, Streisand’s house manager, her husband, James Brolin and La Streisand herself.

The end result is so much fun you will be glad that you, like Alex, were able to come to Barbra Streisand’s cellar complete with a popcorn maker and yogurt machine.

“Dixie’s Tupperware Party,” written by Kris Andersson and directed by Patrick Richwood, stars Dixie Longate, your Tupperware Lady for the evening. Playwright Andersson debuted the production in 2004 at the New York International Fringe Festival. Later, when the show moved on to Off-Broadway, it received a Drama Desk Award Nomination for Outstanding Solo Performance for Ms. Dixie. Now she brings her Tupperware and humor to the L.A. area and yes, you can buy real Tupperware after the show.

Dixie describes herself as a southern girl through and through noting, “I started selling the fantastic plastic crap in 2001… and within a year I was one of the top sellers in the nation because me and some plastic bowls and a bunch of drunk women somehow equals lots of sales.”

She also lets us know she has three kids, “Wynona, Dwayne and Absorbine, Jr.,” plus 3 husbands, all of whom have croaked but Tupperware keeps her going strong without them.

Some of the patter and comments may a bit raunchy for the super prim so be aware and don’t bring ‘Gramma’ unless she’s super -hip. Dixie brings some audience members up on stage and also encourages audience participation throughout, so you could win a little Tupperware surprise ‘thingie.’

While the show won’t be for everyone, the group at the “Tupperware Party” we attended seemed to have a blast and one lady I met after the show said she bought a plastic gravy maker.

While some jokes have double or triple entendres Dixie does take time to share some of her home-spun  philosophy of life, advising us never to give up on ourselves. In a drawl thick enough to cut with a plastic Tupperware utensil she coos “always remember your are ‘a whole’ person And that part of the evening made me think, sort of, and laugh a lot.

“Dixie’s Tupperware Party,” at the Geffen Playhouse (in the Audrey Skirball Kenis Theater) is scheduled to run through Aug. 17, but may be extended. For tickets and information go to Geffen playhouse.com or call (310) 208-5454.

What's New on DVD–For animated action check out DreamWorks "Dragons: Defenders of Berk" Part 2. There's action at every turn and excitement on every ride as the young Viking Hiccup and his fearless friends embark on 10 new adventures based on the Academy Award nominated hit movie "How to Train Your Dragon."

The 2 -disc set has10 thrilling episodes, plus bonus materials that include "World of DreamWorks Animation" and much more. Not rated.

On July 22 Warner Bros. "Transcendence," staring Johnny Depp and Morgan Freeman, will be released on Blu-ray and DVD and will feature interviews with the all-star cast. In the film Depp plays Dr. Will Carter, the foremost researcher in the field of artificial intelligence, who is attempting to create a machine that combines the collective intelligence of everything ever known with the full range of human emotions.

His controversial experiments have made him famous, but they have also made him a target of anti-technology extremists who will do anything to stop him. Rated PG-13.

"Five Dances," available on DVD July 29, is the coming of age tale of a gifted young dancer who comes to New York City to pursue his career. The film, a visually sensual glimpse of life and first love in the contemporary dance world, was shot primarily in and around a Soho dance studio with original dances by the internationally renowned choreographer Jonah Bokaer.

With a cast of five of New York's most talented dancers, the film captures the emotional turbulence and creative excitement of a small dance company during the process of creation. Not rated.

GVN Athlete of the Week, April 17