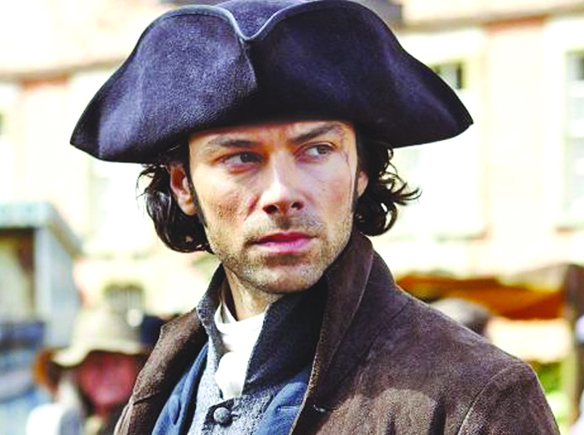 PBS has also released fine documentaries on the nature of crows and the importance of royal clothing.  All of these shows are available on DVD at PBS.org and at retailers such as Target and Barnes and Noble.

PBS has also released fine documentaries on the nature of crows and the importance of royal clothing.  All of these shows are available on DVD at PBS.org and at retailers such as Target and Barnes and Noble.

“Poldark,” based on the novels by Winston Graham, is set against the dramatic  Cornish coastline in the late 18th Century.  The year is 1783 and Ross Poldark (Aidan Turner, ”The Hobbit”) has returned home from the American Revolutionary War to find that England is gripped by  a great recession which has hit his beloved Cornwall particularly hard.

His father is now dead, his family’s land and copper mines are in ruins and his childhood sweetheart is about to marry his first cousin.

Feeling betrayed by everything and everyone he loved, he pulls himself up by the proverbial bootstraps and starts to rebuild his life by embarking on a risky business adventure.

In the process  he finds love where he least expects it. If you enjoy a well written, thought provoking historical drama,

“Poldark” will present hours of entertainment.

If you love baby animals, check out Nature’s “Animal Childhood.” The DVD cover alone will turn you on with pictures of  baby elephants, a tiger cub, a little bear climbing a tree and the face of a tiny monkey tot.  While human kidlets stick around for a long time, and today it seems like forever, animal babies must soon learn to stand on their own four feet and face the world by themselves.

For some animal species this happens moments after their birth with no life lessons from mom or dad.  Others, like baby monkeys, have the advantage of home-schooling by family members or other members in their group.

But even with help it’s never easy since young animals must learn how to find food, avoid predators and make friends on their own if they are to survive after they leave home.

If someone asked you to name the smartest animals in the world would you think of adding crows to the list? If that never occurred to you, think again because crows are right up there with such bright beasts as elephants and chimpanzees.

The fine PBS show "A Murder of Crows" sheds new light on these amazing birds with an attitude. New research presented in this fascinating "Nature" segment, now available on DVD or Blu-ray, shows us that like elephants and chimpanzees, crows are able to use tools.

They can recognize each others voices and 250 distinct calls and are very social. Crows mate for life (hey, that's better than a lot of humans) and they raise their young for up to five years.

Crows can also recognize individual humans and pick them out in a crowd up to two years later. So, if you thought crows were a nuisance or spooky, as presented by Alfred Hitchcock or Edgar Allen Poe, think again.

Dr. Lucy Worsley, chief curator of Historic Royal Palaces, presents the history of royal fashion in PBS's "Tales From the Royal Wardrobe." The modern day paparazzi can't get enough of royals and the clothes they wear. Princess Diana was constantly photographed in her gorgeous gowns and now Prince William's lovely wife, Kate, is in the media spotlight.

But this interest is not new, it has always been this way.

According to Dr. Lucy Worsley, for more than 400 years the public has been intrigued by what the royals chose to wear. She sees it as a carefully orchestrated piece of theater managed by the royals themselves to control the right image and project the right image to their subjects, from Elizabeth I to the present Queen Elizabeth II.

If you enjoy fashion and royal politics it is fun to learn that kings and queens who have not carefully choreographed every aspect of their wardrobe paid the price.

As timeless as the monarchy itself, royal fashion is, and always has been, as much about politics as it is about the cut.