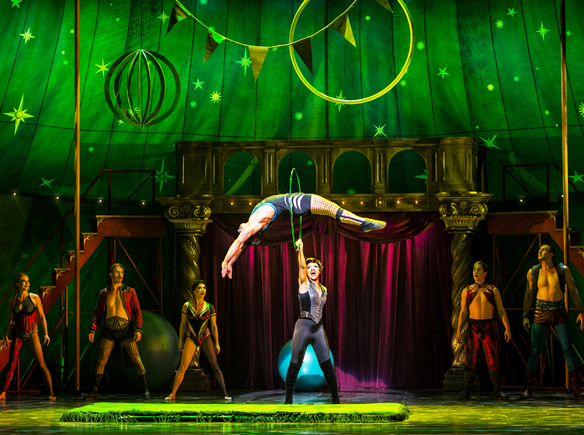 The opening night audience for "Pippin" at the Pantages was blown away by the vibrant new presentation.  The original production of the show, directed by Bob Fosse, premiered on Broadway in 1972 at the Imperial Theatre and ran for 1944 performances, closing in 1977. It received numerous Tony nominations and Ben Vereen garnered a Tony for Best Actor in a musical with Bob Fosse winning the coveted award for his direction and choreography.

The opening night audience for "Pippin" at the Pantages was blown away by the vibrant new presentation.  The original production of the show, directed by Bob Fosse, premiered on Broadway in 1972 at the Imperial Theatre and ran for 1944 performances, closing in 1977. It received numerous Tony nominations and Ben Vereen garnered a Tony for Best Actor in a musical with Bob Fosse winning the coveted award for his direction and choreography.

Actor John Rubinstein created the role of Pippin in the original Broadway production and now he returns to the show in the role of Charles, Pippin's father. Two time Emmy and Tony winner Andrea Martin stars as Berthe, Pippin's delightful, earthy grandmother, a role that earned her the 2013 Tony Award.  Her hilarious, zestful number "No Time at All" was a showstopper.

On opening night the audience gave her a cheering standing ovation after her amazing performance.  Not only does she sing and make you laugh, she was outstanding as an aerial artist. I'm sure everyone would have been delighted if she had done an encore, but no such luck. It was also great fun to be able to sing along with her whenever the chorus lyrics were projected overhead.

This all-new production of Roger O. Hirson and Stephen Schwartz's "Pippin" is directed by Tony Award winner Diane Paulus and features choreography by Tony Award nominee Chet Walker in the style of Bob Fosse and circus creation by Gypsy Snider of the Montreal-based circus company "Les 7 doigts de la main" (also known as 7 Fingers). The end result is a blend of Broadway and cirque excellence that left the audience in awe and delight as performers leapt from  pole to pole or flew overhead via trapeze or flowing cloth ribbons.  They also did complicated tumbles and acrobatics, performed balancing feats, juggled and jumped through hoops with the greatest of ease.

Matthew James Thomas, who originated the role of Pippin in the current 2013 Tony Award  winning revival, performs the title role with gusto.  Not only does he sing and dance, he has a flair for comedy and acrobatics. Sasha Allen (a finalist on the 4th season of NBC's "The Voice") stars as "Leading Player" and Sabrina  Harper, original Broadway revival cast, is Fastrada.

Basically Pippin is the fanciful story of a young prince who embarks on a death-defying journey to find meaning in his life.  Will he choose a happy but simple life or will he risk everything for a singular flash of glory? The musical is filled with countless Broadway standards that include "Magic to Do," which opens the show, "Corner of the Sky," "Glory," "No Time at All," "Morning Glow" and "Love Song."  If you loved the original production you will enjoy this revised adventure even more with its spectacular staging and amazing circus acts.  Great fun for the family to share.

This Tony Award-Winning hit Broadway musical revival has definitely found its "Corner of the Sky" here in Los Angeles and will continue to do so wherever it travels across the U.S.

Tickets for "Pippin" are available online at www.HollywoodPantages.com or www.ticketmaster.com; by phone at 800-982-2787 or at the Hollywood Pantages Box Office located at 6233 Hollywood Blvd.  The show runs for three weeks only, ending Nov. 9.

After "Pippin" comes the Tony Award winner "Kinky Boots" and Dec. 10 through March 15 the fabulous "Wicked" returns.  Get your tickets today for the Pantages' exciting new 2014-2015 season.

The 12th season of Glorya Kaufman Presents Dance at the Music Center continues with BalletBoyz for three performances only, Nov. 7-9.  The repertory for this program will include Liam Scarlett's "Serpent" with music by Max Richter and Russell Maliphant's "Fallen."

With UK and international appearances on stage and screen the dance company is one of the most cheekily original and innovative forces in modern dance.  They have thrilled audiences and critics all over the world with their distinctive style, fusing spectacular dance with music and film.  Their groundbreaking work earned them the 2014 UK critics circle National Dance Award for Best Independent Dance Co.

Summer movies for grown-ups: ‘The Hundred-Foot Journey,’ ‘Get On Up’