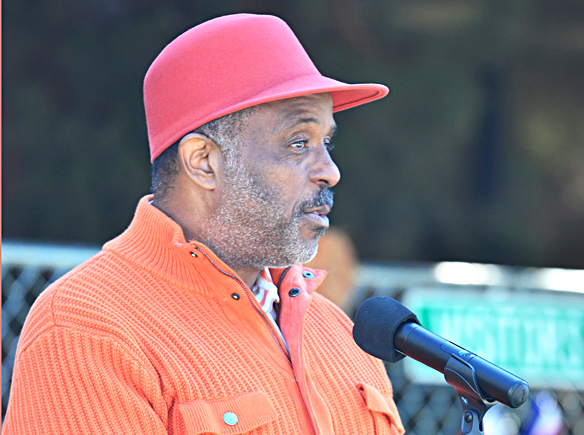 State Sen. Rod Wright, D-Baldwin Hills, is on indefinite leave of absence as he resolves his legal problems, but will continue to draw his $95,291 annual salary, Senate leader Darrell Steinberg announced Feb. 25.

Wright, 61, who was convicted of voter fraud last month, had his March 12 sentencing date postponed until May 16.

State Sen. Rod Wright, D-Baldwin Hills, is on indefinite leave of absence as he resolves his legal problems, but will continue to draw his $95,291 annual salary, Senate leader Darrell Steinberg announced Feb. 25.

Wright, 61, who was convicted of voter fraud last month, had his March 12 sentencing date postponed until May 16.

The veteran lawmaker was convicted of living outside the Inglewood-based Senate District that he was elected to represent. He faces five counts of voter fraud, two counts of perjury and one count of filing a false declaration of candidacy. If convicted, he could serve up to eight years and four months in prison.

Wright chose not to remove himself from office, but to take a leave of absence. Recently he requested and received approval to remain salaried while on leave.

A movement by some Republican senators to expel Wright from the senate failed on Feb. 27. The resolution they drafted cited state law that said, “a person is disqualified from holding any office upon conviction of designated crimes as specified in the Constitution and laws of the state.”

Steinberg said that Wright’s conviction is not absolute until the sentencing process. He indicated that removing Wright from office now would be premature and irreversible.

Removing a senator requires a two-thirds vote of the Senate. Without Wright, there are 38 voting members of which 27 are democrats.

Wright said he plans to appeal the decision. In a prepared statement he sent to the Sacramento Bee, Wright said he is devoting his full attention to “pending legal matters.”

“It is a great honor to represent the people of the 35th Senate District. I remain hopeful that – through due process – I will once again have the opportunity to fight for laws that strengthen our communities and support those most in need,” Wright said in the statement.

Steinberg noted that there is no provision in the state constitution that allows the Senate to deny a member’s salary.

However, Wright would not receive the $163-a-day living expense given to other lawmakers.

Wright represents the 35th Senate District, which includes the City of Gardena. He served in the state Assembly from 1996 to 2002. He won the tough Democratic primary Senate race in June 2008, and claimed an easy victory in November of that year to serve the former 25th Senate District — which included Inglewood.

In 2010, Los Angeles County prosecutors charged that he was not a resident of Inglewood as he had claimed, but living in Baldwin Hills which is about 1 ½ miles outside the 25th senate district he represented. The senator claimed the Baldwin Hills property was being used as an office. A jury voted against him in January.