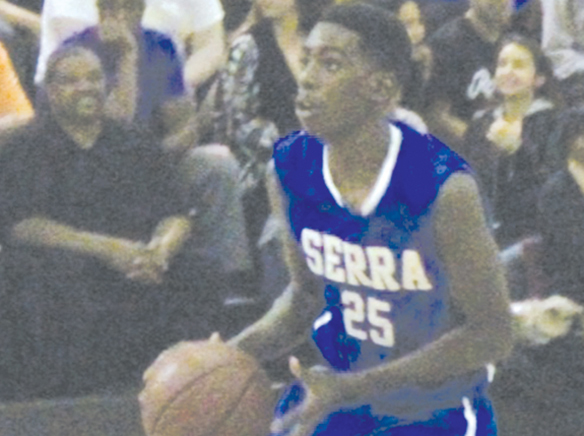 It was one of those typical Del Rey League boys’ basketball rivalries between two South Bay heavyweights in Serra and host Bishop Montgomery on Jan. 22 in Torrance.

It was mostly a see-saw battle but the Cavaliers came out on top for a 71-70 victory over the Knights.

In the match-up between Bishop Montgomery, ranked No. 1 in the CIF-Southern Section Division IVAA and Serra, second in the division, Bishop Montgomery started off well with a 21-14 lead after the first quarter.

It was one of those typical Del Rey League boys’ basketball rivalries between two South Bay heavyweights in Serra and host Bishop Montgomery on Jan. 22 in Torrance.

It was mostly a see-saw battle but the Cavaliers came out on top for a 71-70 victory over the Knights.

In the match-up between Bishop Montgomery, ranked No. 1 in the CIF-Southern Section Division IVAA and Serra, second in the division, Bishop Montgomery started off well with a 21-14 lead after the first quarter.

The second period, however, was dominated by the Cavaliers who outscored the Knights 20-11 to grab a 34-32 halftime lead.

Bishop Montgomery came back to lead 56-54 after three periods, but the fourth quarter began with a three-point basket from Ron Freeman that gave Serra a one-point lead.

That set the tone for the Cavaliers who went on to lead by as many as six points and held on for the victory.

The Knights tied the contest at 68 with 1:49 left in the contest on a layup by Christian Oshita on an assist by returning all-CIF and Long Beach State-bound guard Justin Bibbins, but Serra grabbed the lead for good on an alley-oop pass from Jason Richardson to Freeman for a layup.

Tavrion Dawson added a free throw for a three-point lead.

Bishop Montgomery’s Bibbins was fouled as he made two free throws to cut Serra’s lead to one point.

After the Cavaliers missed a shot and the Knights rebounded the ball, Bibbins attempted a three-pointer but missed as Serra players had a sigh of relief.

“It feels good,” Richardson said about the big win. “We got to keep practicing hard. We’re continuing to improve.”

Serra was led by Richardson with 23 points. Freeman, who already signed to play basketball at Cal State Fullerton, added 21 points and Dawson chipped in eight.

The Cavaliers, who have a seven-game winning streak after a 48-43 win at home against St. Bernard last Friday and a 72-54 non-league victory over host Fairfax in the Fairfax California State Showcase last Saturday, improved to 13-6 overall and 3-0 in league.

Bishop Montgomery, which began with 10 straight wins before losses to Redondo, J.W. North of Riverside and Serra, is 15-3 overall and 3-1 in league after a win over host La Salle last Friday in Pasadena.

The Knights were led by Bibbins with 19 points, followed by Stephen Thompson, Jr. with 14, including four three-pointers.

A little down after the big win over Bishop Montgomery, Serra was able to hold off the Vikings.

At Fairfax on Saturday, Freeman led with 21 points and eight rebounds. Dawson finished with 20 points and nine rebounds as the Cavaliers dominated the CIF-Los Angeles City power Lions.

Serra hosted Bishop Amat from La Puente in a Del Rey game last night and will host Upland in the Nike Extravaganza on Saturday at 10 a.m. at Mater Dei High in Santa Ana.

The Cavaliers, then, travel to La Salle in Pasadena to resume league next Wednesday at 7 p.m. before their second showdown at home against Bishop Montgomery on Feb. 7 at 5 p.m.

This past weekend was definitely called “All-Star Football Weekend.”

Along with the National Football League’s Pro Bowl in Honolulu, Hawaii, that was won by a thrilling 22-21 score by Team Rice over Team Sanders, on Sunday, and the College Senior Bowl Game in Mobile, Alabama on Saturday, there were two South Bay All-Star Football Classics that involved two beach rival high schools, Manhattan Beach Mira Costa and Redondo.

In the West Coast game, that featured mostly players from California but had a few out of state stars from as far away Florida, Virginia and North Carolina, it was the Cavaliers that shined. Perhaps the biggest play was made by Dwight Williams as he intercepted a pass and returned it 75 yards for a touchdown for Speed’s final touchdown with 7:21 left in the game.

Adoree Jackson was his usual on offense and defense. The five-star college recruit, who is expected to decide where he will play football at next fall when National Signing Day is held next Wednesday at an assembly in Serra High’s gym, had a 60-yard punt return that set up Speed’s second TD on a 3-yard pass from Narbonne quarterback Eban Jackson to Sherman Oaks Notre Dame’s Daniel Khan that gave Speed a 12-0 lead.

Jackson also had a 51-yard reception from Eban Jackson.

“This is my last high school game before I make my announcement,” Jackson said. “I had fun. It was great to display our talent.”

The Cavaliers, who won the Mission but lost in the CIF-Southern Section Western Division championship game at home to league rival West Hills Chaminade 38-35 on Dec. 6, were also represented by University of Southern California-bound Olajuwon Tucker, University of Oregon-bound Glen Ihenacho and Gregory Webb on Speed.

Lasley, headed to UCLA in the fall, played for Impact and made a few good plays.

In the Lions’ Classic a day earlier, it was the outstanding defensive defensive plays of Serra defensive back Jalen Jones that keyed the Blue victory.

Jones made two interceptions but, perhaps, his biggest play came on the game’s last play when Wilmington Banning kicker Jesse Montesdeoca attempted a 36-yard field goal. Jones blocked the kick that fell very low and well short as the Blue stars held on.

“It was exciting,” Jones said about his plays and playing in the 50th all-star classic that began in 1965 at El Camino College’s Murdock Stadium, which is currently condemned and very soon to be demolished for a new stadium and Kinesiology Center to be completed in about two years. “This is my last high school game.”

Also getting into the act for the Blues was Gardena High’s Preshay Houston who gave them a 14-6 lead on an 18-yard pass by Bishop Montgomery quarterback Louie Soto with 31 seconds remaining in the second quarter.

The Whites began the scoring on a 16-yard TD pass from Redondo quarterback Harrison Faecher to Narbonne wide receiver Marvelle Lias. The point-after-touchdown attempt by Montesdeoca was blocked.

The Blue squad took the lead for good at 7-6 when quarterback Ian Estucia (Rolling Hills Estates Peninsula) scored on a 1-yard run that was set up by a 40-yard pass from Estucia to Eddie Thomas (Hawthorne).

The Whites got within two when Torrance’s Bobby Wilson ran an interception 100 yards for a touchdown but Faecher’s two-point conversion pass that would have tied the game at 14 fell incomplete.

Serra High standout athlete Adoree Jackson, a five-star recruit who plans to announce where he will play college football next Wednesday on National Signing Day, received top honors in virtually every poll.

Perhaps the biggest came shortly after New Year’s Day when he was California’s Mr. Football (California State Player of the Year) by Cal Hi Publications. Other top honors included All-American by Under Armour and Maxpreps, along with the Daily Breeze South Bay Player of the Year, the Mission League’s Most Valuable Player and the CIF-Southern Section Western Division Defensive Player of the Year.

Jackson stood out in whatever position one could put him in; offense or defense.

As a receiver in the 2013 season, Jackson had 38 receptions for 812 yards and seven touchdowns. As a running back, Jackson had to replace the injured junior Malik Roberson, who was lost for the season with a torn ACL, and he rushed for 639 yards on 66 carries.

Even though Jackson injured his ankle in the Cavaliers’ Western Division quarterfinal at Buena High in Ventura, he had a 92-yard kickoff return and a 93-yard punt return in Serra’s Western Division championship loss to Mission League rival West Hills Chaminade on Dec. 6 at Serra.

Last Sunday in the B2G West Coast All-Star Bowl Classic at Redondo High, Jackson had a 60-yard punt return that set up one of his Team Speed’s touchdowns, a 3-yard pass from Narbonne quarterback Eban Jackson to Daniel Khan from Sherman Oaks Notre Dame.

He also added a 51-yard reception from Jackson in Speed’s 18-0 win over Team Impact.

Greene was also the Mission’s co-Offensive Player of the year with Chaminade quarterback Brad Haaya.

Tucker, who will be playing football at University of Southern California next fall, recorded 117 tackles, including 12 quarterback sacks. He also intercepted seven passes and had two fumble recoveries.

Tucker received the league’s co-Defensive Player of the year with Donovan Lee from Chaminade.

Perhaps the bigger win was the Cavaliers’ victory over Bishop’s, one of the top teams in the CIF-San Diego Section Division IV, 87-61.

The Cavaliers broke the game open with a 16-0 run early in the second quarter.

In league last Thursday, Serra had little trouble with La Salle in a 73-32 blowout.

Serra showed down at Bishop Montgomery in Torrance last Tuesday and will host St. Bernard today at 5 p.m. The Cavaliers, then, host Palisades in a non-league game Saturday at 7 p.m.

Christian Carating led the Panthers with 16 points in their loss to San Pedro. He had 15 points against the Gauchos.

The Pirates were led by Khalil Dave with 13 points and five assists.

On Jan. 22, Narbonne, which leads the Marine League at 6-0, was led by Reverend Maduakor with 15 points and seven rebounds.

After visiting Banning last night, Gardena hosts Washington Friday at 5:30 p.m. The Panthers, then, visit Carson on Monday at 7 p.m. before coming home to play King-Drew Medical Magnet next Wednesday at 5:30 p.m.

The Panthers are 3-16 overall. 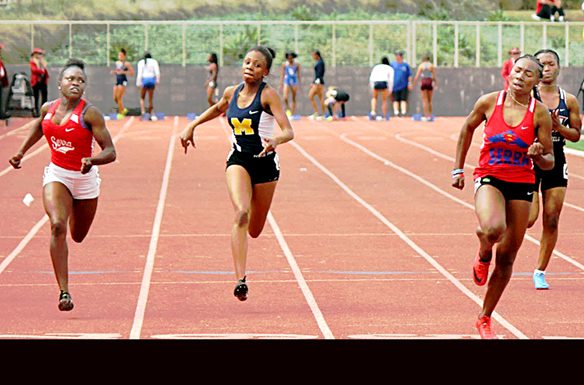 THE LONG VIEW: A Prince of an artist left a wealth of memories 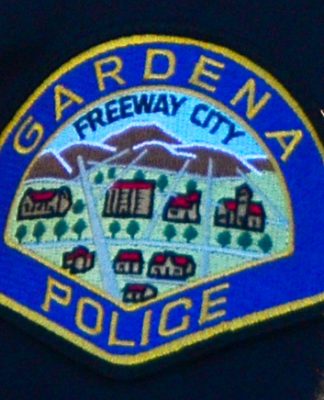 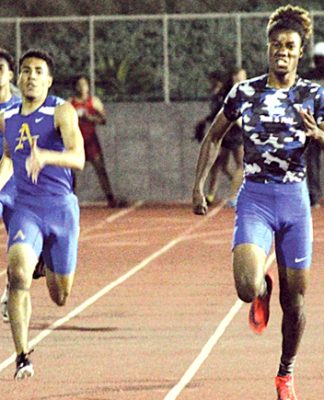 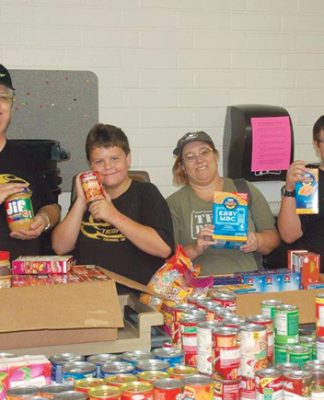 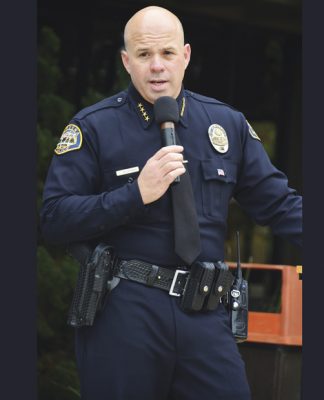 GVN Athlete of the Week, Nov. 6