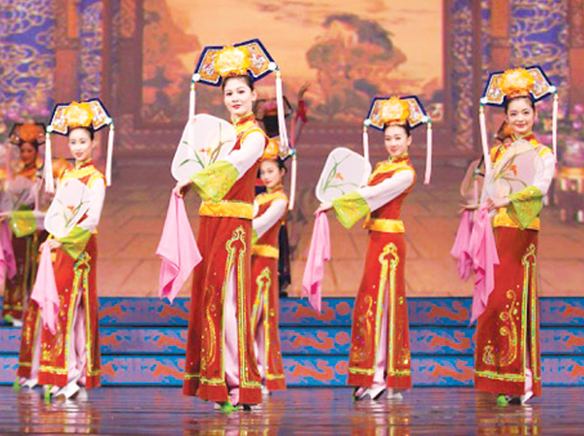 It is said that the month of January is named after the two-faced Roman god Janus, with one face looking back at the old year while the other face gazes into the future.  In that spirit, for this column, I will take a look back and forward at the wonderful world of entertainment here in Southern California as we begin 2015.

It is said that the month of January is named after the two-faced Roman god Janus, with one face looking back at the old year while the other face gazes into the future.  In that spirit, for this column, I will take a look back and forward at the wonderful world of entertainment here in Southern California as we begin 2015.

For me the New Year began with a "Salute to Vienna" at the Walt  Disney Concert Hall. It is performed in the local area every January for one day only, and seeing the show is like a mini musical visit to Vienna, a city of dreams. Next year, if you want to travel to Vienna sans passport, mark your 2016 Entertainment calendar and check off this Viennese bonbon.

This year the singers were Thomas Weinhappel (baritone), Lilla Galambos  (soprano) and Eugene Amesmann (tenor). All three were in great voice and high spirits under the direction of conductor Niels Muus. The music was 'lustig' with Strauss waltzes and music from operettas like "Die Fledermaus" and Franz Lehar's "The Merry Widow." Two dance companies also performed with grace, style and flourishes of humor. Seeing "A Salute to Vienna" was great fun and a great way to begin 2015.

Looking forward, on Jan. 22, Shen Yun will perform at the Dolby Theater (formerly the Kodak) 6801 Hollywood Blvd. through Jan. 25.  It will then move to Northridge on Jan. 27-28 at the Valley Performing Arts Center, and from Jan. 29-31 at the Segerstrom Center in Orange County. For tickets and information, go to www.ShenYun.com/LA or phone  800-880-0188

Shen Yun has received high praise from critics around the world and features a cast of 60 dancers and 40 musicians who bring audiences 5,000 years of Chinese culture, presented in one magical evening of music and dance. Sadly, while this lavish production is touring the world, it has not been allowed to be seen in China itself.

The ideas for Shen Yun began in 2006 when Chinese artists gathered in New York and developed the concept for this lavish show.  Now five companies travel around the world and present Shen Yun on four continents.

The people of China have long believed that their culture was a gift from heaven and that art was the primary way to explore the connection between humanity and the higher universe.  In one evening the 100 performers in the Shen Yun company take their audiences on a journey of 5,000 years as they present a musical and dance tapestry of heavenly realms, ancient legends and heroic stories.  Once again, no passport is needed to go on this beautiful, artistic journey.

In 2014 I saw Noel Coward's charming period comedy,"Blithe Spirit," at the Ahmanson, starring Angela Lansbury in her Tony-Award-winning role as Madam Arcati. She is amazing as a medium who conjures up the late wife of a novelist.  At 89 she is still a true crowd-pleaser.  Everything about this production is excellent, from cast to sets and costumes.  The show ends on Jan. 18, so there is still time to enjoy it.

As for movies, one of my personal favorites was "Into The Woods," based on the Stephen Sondheim musical of the same name. A fairytale for adults, the film stars Emily Blunt as the Baker's wife, Meryl Streep as the witch, Johnny Depp as the wolf and Chris Pine as Prince Charming. It opened on Christmas Day 2014, is a contender for Golden Globes and may also be in the race when Oscar time rolls around.

Other excellent films from 2014 include "The Imitation Game," starring Benedict Cumberbatch and Keira Knightly.  This stunning drama tells the true story of how one man saved countless millions of lives by figuring out how to break the German Code during WWII.  "Time Magazine" calls Cumberbatch's performance "the best performance of the year."

Other excellent films, based on real characters, include "The Theory of Everything" about Stephen Hawking and "Unbroken," Angelina Jolie's tribute to war hero and Olympic athlete Louis Zamparini

Coming to DVD in January: "The Boxtrolls," from the creators of the Academy Award-nominated films "Coraline" and "Paranorman," will be available on Blu-ray and DVD on Jan. 20.The animated film has been nominated for 13 Annie Awards and will probably be nominated for an animated film Oscar.

On Jan. 27 "Fury," starring Brad Pitt and Shia LaBeouf, arrives on Blu-ray and DVD.   The powerful war drama. set in 1945, has been hailed  as "a film that grabs you and never lets go," by Peter Travers, "Rolling Stone.