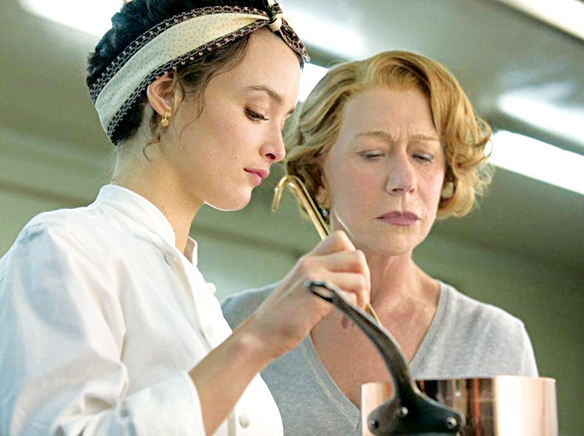 "The Hundred-Foot Journey," based on Richard C. Morais' best -selling novel, is now a delicious cinematic treat produced by Steven Spielberg and Oprah Winfrey. Directed by Lasse Hallstrom ("Chocolat," Cider House Rules"), the film is a romantic tale of two cultures and two cuisines that focuses on the magic of fine food beautifully prepared. After seeing this tasty trifle aimed at adult movie palettes I wanted to head to a French restaurant and eat. "Bon appetit!"

"The Hundred-Foot Journey," based on Richard C. Morais' best -selling novel, is now a delicious cinematic treat produced by Steven Spielberg and Oprah Winfrey. Directed by Lasse Hallstrom ("Chocolat," Cider House Rules"), the film is a romantic tale of two cultures and two cuisines that focuses on the magic of fine food beautifully prepared. After seeing this tasty trifle aimed at adult movie palettes I wanted to head to a French restaurant and eat. "Bon appetit!"

The movie is reminiscent of other films about gourmet food preparation like the 1987 Danish Oscar winner "Babette's Feast" and the Meryl Streep comedy "Julie and Julia," the latter about the famous TV chef and cookbook author, Julia Child. And who can forget the Disney/Pixar animated treasure "Ratatouille" abut a fabulous chef who just happens to be a rat. But the little guy knows how to cook and he always, always washes his little hands. In fact in this film, as in "Ratatouille," a romance develops between two chefs who find themselves in direct competition with one another.

In this latest foodie fable, not only is the menu divine, so is the scenery as we travel from Mumbai, India to a charming village in France, then on to Paris

The story starts in Mumbai, but after a tragedy, due to political unrest, the Kadam family is forced to leave their homeland. They first come to England for asylum, but find the vegetables there not to their liking. This is not the case when they arrive in France. After their old car breaks down on a steep country road they are helped by the very beautiful Marguerite (Charlotte Le Bon) who turns out to be the sous chef at Madame Mallory's fine local restaurant.

Madame Mallory (a very snooty Helen Mirren) is proud of her one star Michelin establishment and dreams of one day earning yet another star. When the Hadam family buys the deserted former restaurant 100 feet from her establishment a definite food fight begins. Add to the mix, the very handsome eldest son Hassan (Manish Dayal) who has the potential to become a major chef if he and his family are able to establish their Indian restaurant in this petite French town.

As the Hadam family rebuilds the empty, run-down former restaurant across from Mirren's elegant "Le Saule Pleureur," she becomes furious and soon it is war between the proud French restaurateur and the Hadam family, headed by Papa Hadam, veteran Indian actor Om Puri.

The cultural clashes, mouth watering food preparations and beautiful scenery combined with young love and romance make  "The One-Hundred Foot Journey" one of the most pleasant movies so far this summer. Rated PG for some thematic elements, some violence, language and brief sensuality. Running time, 2 hours.

"Get On Up," directed by Tate Taylor ("The Help"), is a film biography of James Brown, "The Godfather of Soul." Mick Jagger, one of the film's co-producers along with Brian Grazer, appeared at the famous Apollo Theater in New York as did Brown, and he credits the soul singer for inspiring some of his on stage moves as a Rolling Stone. Director Taylor, born in 1970, was not around when Brown hit his musical stride in the 1960s, but it is obvious that Taylor still digs Brown's R&B style that eventually morphed into soul.

Chadwick Bosman, who was excellent as Jackie Robinson in "42," stars as Brown and has all the right dance moves. In an interview Bosman said he worked hard to perfect the funky dance moves and countless on-stage splits. Dance instruction lasted five hours a day until he perfected James Brown's fancy footwork. With that kind of dedication the actor could be a great contestant on TV's "Dancing With the Stars."

While Bosman mastered all the dance moves, he did not sing as Jamie Foxx did in his Oscar-winning portrayal as Ray Charles. But in a way it's nice to know that the voice we hear in the film is actually James Brown's.

"Get On Up" was filmed in Mississippi and features Octavia Spencer and Viola Davis as Brown's aunt and mother respectively. (Both ladies also co-starred in "The Help.") Dan Aykroyd plays Brown's sympathetic agent who helped him achieve not only musical success, but financial success as well. Their working relationship lasted a lifetime and meant a great deal to the singer.

Songs in the film include "Poppa's Got a Brand New Bag," referring to a whole new lifestyle, "Cold Sweat" and "Sex Machine."  Part of the lyrics to that song say "Get up offa that thing, I feel like a sex machine," which inspired the film’s title.

When Oscar time rolls around, the movie may not be nominated, but Chadwick Bosman is most deserving of consideration for his very compelling portrayal of "The Godfather of Soul."

THE LONG VIEW: Internet disconnect opens a world of possibilities