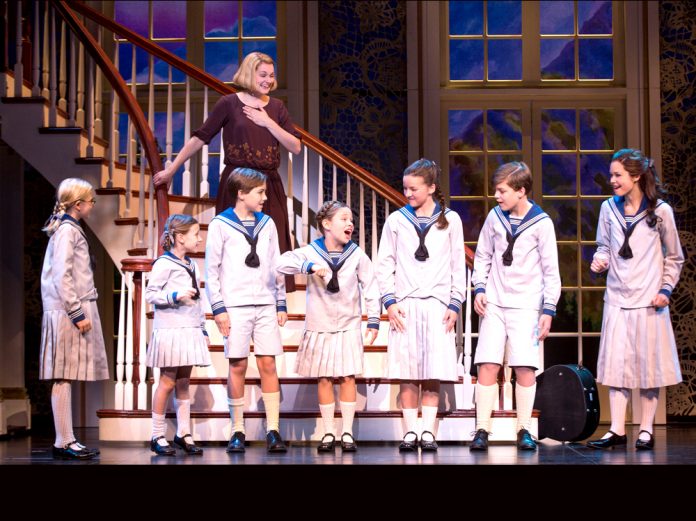 Three-time Tony Award winning director Jack O' Brien is in his 70s, but under his direction "The Sound of Music" at the Ahmanson Theatre through Oct. 31, is even more vibrant and alive than when it first appeared on stage in 1959. In the current revival much of the freshness is achieved by his casting of Maria. According to O'Brien, "The Maria in our production, Kirstin Anderson, is just turning 21 years old."

Three-time Tony Award winning director Jack O' Brien is in his 70s, but under his direction "The Sound of Music" at the Ahmanson Theatre through Oct. 31, is even more vibrant and alive than when it first appeared on stage in 1959. In the current revival much of the freshness is achieved by his casting of Maria. According to O'Brien, "The Maria in our production, Kirstin Anderson, is just turning 21 years old."

The real life Maria Rainer was also just 21 years old when she left the abbey to serve as a temporary governess for the von Trapp family. In the original Broadway production Mary Martin, who played Maria, was 46. O' Brian also lowered the ages of most of the characters by at least 15 or 20 years.
"The Mother Abbess, Maria's mentor, is being played by Ashley Brown, who is in her 30s. When she sings 'Climb Every Mountain' to Maria, she's singing about her own journey, about herself. That's how she chose God. She, like Maria, was attractive, young and vulnerable too.
"I don't know how to say this," he continued, "but I'm looking at this show with emotion and love and sex in mind. A story that has existed for 50 years needs beautiful music, but it also needs a heart beating inside it."

Ben Davis (Capt. Georg von Trapp) also adds warmth to this latest incarnation. Usually the Captain is seen as overly stiff and strict, but in Davis's nuanced portrayal Georg is able to soften his stance with his children shortly after Maria enters their lives.

And unlike the film, the seven von Trapp children warm to Maria quickly. They see in her someone who is, like themselves, playful, vibrant and open to music and joy.

Merwin Foard plays Max Detweiler, with Teri Hansen in the role of Elsa Schraeder. who has her eye on the Captain, more for practical reasons than for love.
The hills, and the Ahmanson, are alive with the sound of music throughout as Maria and Mother Abbess sing "My Favorite Things" in Act I. Their playful interaction adds charm to their relationship. Other iconic songs in Act I include "The Sound of Music," "Do-Re-Mi," "The Lonely Goatherd," "So Long Farewell" and "Climb Every Mountain," sung by Mother Abbess (Ashley Brown). Her presentation of the song was so stirring that she evoked prolonged cheers from the opening night audience.
Act II turns darker as the Captain is faced with a moral dilemma. A loyal Austrian, he can not support the takeover of his beloved country by the Third Reich, but shortly after he and Maria are married, Nazis arrive at his estate with orders for him to report to active duty immediately. Fortunately the family is scheduled to sing in a highly publicized local festival and he and his family are reluctantly allowed to perform together as a courtesy before he must go to war. The full menace of what is to come, not only to Austria but to the world at large, is made graphically apparent when four floor to ceiling length red and black Nazi banners are unfurled behind the von Trapp family as they sing "Edelweiss," a song that asks God to "Bless my homeland forever."

Even though this Rodgers and Hammerstein masterpiece is a half-century old, it is still relevant to modern audiences because, according to O'Brien, "our word will always be in peril. And we take courage from the success of others, and learn how to behave in difficult circumstances (when) we see people stand up for their rights and make a moral decision."

It's too bad Pope Francis didn't get the chance to see this eloquent revival of
"The Sound of Music" on his recent visit. The religious purity, moral conviction, courage and sheer beauty of this production would surely have made him happy. It will also delight everyone who love this inspiring true story set to music by the incomparable team of Rodgers and Hammerstein.
"The Sound of Music," at the Ahmanson Theatre, 135 North Grand Ave., L.A. ends Oct. 31. Tickets from $25 to $150. For information go to: www.centertheatregroup.org or call 213-628-2772. Running time 2 hours, 40 minutes.

Ballet lovers, mark your calendars for the arrival of the Mariinsky Ballet and Orchestra's "Cinderella" at the Dorothy Chandler Pavilion from October 8-11 only. For tickets and information call 213-972-0711.

In the PBS Masterpiece Mystery “Arthur & George,” the world’s greatest crime writer, Sir Arthur Conan Doyle, turns detective. Martin Clunes (“Doc Martin”) stars as Sir Arthur, creator of Sherlock Holmes, who is outraged by what he feels is a great injustice to an Anglo-Indian solicitor. When the man’s plight is brought to his attention he decides to get to the truth on his own, using the methods employed by his fictional super sleuth, Sherlock.

The story begins shortly after the death of Sir Arthur’s wife.  He is unable to concentrate on writing and seems adrift until his personal secretary and friend (Charles Edwards “Downton Abbey”) brings him a letter from a young solicitor named George, asking if Sir Arthur could help him clear his name.  George has served several years in prison, accused of killing and mutilating animals.  When Sir Arthur meets the earnest young man he is convinced of his innocence..

This thoroughly engrossing three hour drama, adapted from Julian Barnes’ novel, is based on actual events.  Filled with twists and turns, this true-life mystery will keep you guessing till the very end. The program contains material that may not be appropriate for all viewers since it does involve some scenes of animal cruelty, so viewer discretion is advised.