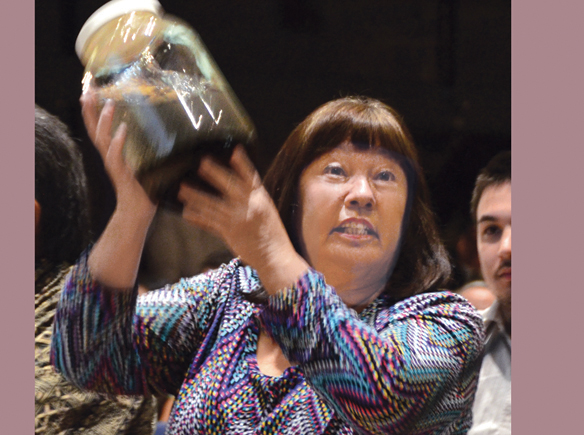 Gardena residents expressed their fury and frustration concerning various water issues, including the black sludge that has been spewing from some home faucets, during a special meeting hosted by the Golden State Water Company last week at the Nakaoka Community Center.

Gardena residents expressed their fury and frustration concerning various water issues, including the black sludge that has been spewing from some home faucets, during a special meeting hosted by the Golden State Water Company last week at the Nakaoka Community Center.

What’s at issue is the water system used by Gardena citizens. Residents said they have long complained of foul-smelling, discolored water, and now that black sludge can be seen pouring from the faucets and showerheads in some homes. Until last week, most citizens have not received an acceptable response from the water company.

Nutting said that Gardena’s water is “safe to drink.”

Residents, however, were not satisfied with that response and expressed their concerns in no uncertain terms.

“You guys are repeating the same thing over and over,” said Gardena resident Mina Colunga. “You test it and test it. Obviously it’s not working. It’s destroyed my clothes. I’ve had to replace hundreds of dollars of clothes. I’ve had to replace my toilet because I can’t get the stuff off the toilet. I can’t drink the water. I’m spending a hundred dollars a month in (bottled) water because I don’t trust your water.”

Nutting said that while it’s not unusual for older pipes to have discolored water, she said some things that residents can do to rectify the situation in their own homes is to flush the toilets several times per day which would increase water quality and decrease discoloration. Also running faucets for at least 20 minutes per day would help to alleviate the situation.

Steven Bradford, former chair of the assembly committee on utilities and commerce who was in attendance at the meeting, said that this black water problem has been plaguing the city for quite a while.

“The concern that these residents are expressing tonight is not new,” Bradford said. “I spent twelve years on the city council and these issues were heard back then. To act like these are new concerns and that it’s only discoloration is an insult to many of the folks here tonight.”

Golden State Water Company is currently considering a rate increase of 14-15 percent, which Bradford said was too much for bad quality water.

“You’re asking for a rate increase this year,” Bradford said. “What percentage of that will be used for infrastructure replacement?”

Gardena City Councilman Dan Medina, Garden’s representative on the West Basin Water Association, who attended the meeting, has been complaining about the water issue since 2010. He said Golden State Water told him that the issue with the  water would be fixed through relining or replacing the 110 miles of pipes just in Gardena.

“At an average of 5.5 miles per year that you’re going to cover, we’re looking at 18 to 21 years before we have everything fixed and my logic tells me that during those years you’ll have to start from scratch and do it all over again,” Medina said. “If it’s possible financially why don’t you double that time or triple that time since you have the money.”

Medina suggested that Golden State Water increase their rate of repair to 18 or even 20 miles of pipe per year, which he says would place the completion date to five years as opposed to 21 years.

Back in 2010, Medina came up with an idea for conserving the water that water officials waste while routinely flushing city water pipes.

Medina said he conceived of a Y plug that could connect to a fire hydrant. One end of the Y would have a valve that could control the flow of water. Using this valve, Medina said the water that residents use to flush their toilets could be diverted to a street sweeper that could hold a couple of hundred gallons of water which could then be recycled and made usable by residents again.

His plan for recycling was not acknowledged by GSWC officials at the time, Medina said. He pitched the idea again. Nutting, who admitted to only being in her manager position since last summer, said she would consider Medina’s recycling plan.

One solution that Golden State Water discussed aside from replacing the 110 miles of pipes in Gardena was Unidirectional Flushing (UDF), a process performed by isolating one specific section of water pipeline at a time, resulting in high velocity water flow that scours the pipeline.

Recently, Medina has been working to get some redress for Yolanda Barnes, a Gardena resident whose skin is severely disfigured possibly due to the impurities in the water. Her entire body, including her arms, face, and legs has been severely damaged, her mother Ethel Barnes said.

Barnes says she is in constant pain and itches so severely that she often can’t sleep at night and has to use creams and ointments to control the compulsion to scratch.

Ethel Barnes says she has been experiencing issues with the local water since she and her husband moved to Gardena in 1969. She says watching her daughter suffer has been very hard on her.

“It doesn’t make me feel well, but I can’t fall apart,” she said. “I have to take care of her and make sure she is as comfortable as she can be.”

Ethel, who calls herself one of the biggest complainers about the water, talked to Golden State Water who came out and conducted tests at her home, she said. They told her the water was fine.

One resident who is has physical evidence that the water is not fine is Diane Morita, who has been a Gardena resident since 1965.

The recent issue of black water in some areas of Gardena has become known around the country because of Morita’s efforts.

Earlier this month, she posted a YouTube video of black water and sludge spewing from her water faucets that quickly went viral, attracting interest from citizens and the media alike.

The video also caught the attention of the Golden State Water Company, the city’s water supplier.

During the meeting Morita came armed with a large jar of black water and sludge that had come out of her faucet earlier that day. She and her husband also brought water filters, including a neighbor’s black filter, to show that the black water situation was not isolated.

“All I ever hear is how you test the water in the city and it’s safe to drink,” Morita said. “Please drink this (pointing to her jar of black water) and then tell me it’s fine.”

Morita said she received the same advice as other residents of running the water for a while to clear things out.

“When I call and complain they always tell me to run my water for 20 minutes and it’ll clear,” she said. “Yeah, I can run it every time, but do you want to be in my shower when that comes out (pointing to her jar)?”

Residents also complained about the potential increase in their water bill, as well as being charged for “wasting” water by running it till the pipes clear, as recommended by GSWC officials.