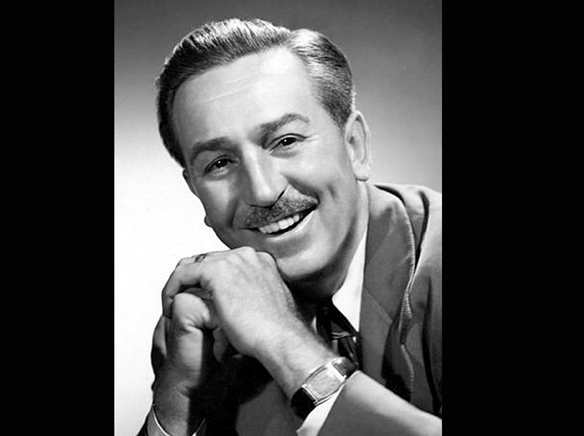 Children from Anaheim to Zanzibar are familiar with Walt Disney’s animated characters–and the magic began many years ago when Walt created a little mouse named Mickey.

Children from Anaheim to Zanzibar are familiar with Walt Disney’s animated characters–and the magic began many years ago when Walt created a little mouse named Mickey.

According to legend, the idea for Mickey was based on an actual pet mouse Disney kept in his Kansas City studio. The little fellow was one of a fairly large family of field mice Walt had discovered in his wastepaper basket. Though the mice were housed in cages to keep them out of mischief, the clever little “Mortimer” was allowed to scamper on Walt’s drawing board. In fact, Disney trained the little guy to stay within a drawn circle, tapping the bright mouse lightly on the nose whenever he started to scamper across the pencil lines.

As for Mickey’s birth, well, it’s a remarkable part of animation history. He first appeared on screen at the Colony Theatre in Manhattan on Nov. 18, 1928. But he wasn’t the same well-mannered mouse we know today. In the early days Mickey was rambunctious. But unlike other animated animals of his era, Mickey started his career with a distinct personality and a voice of his own.

Walt had the talented Ubbe “Ub” Iwerks do the first animated drawings for Mickey, and for nearly a quarter of a century Walt himself was Mickey’s voice. And lucky for Mickey—before he made his screen debut Walt’s wife Lilian told Walt she thought “Mortimer” was too stuffy a moniker for such a playful rodent, suggesting he call him Mickey instead.

Upon release, “Steamboat Willie,” the first all-talking cartoon featuring the newly created Mickey Mouse, took the nation by storm. Disney’s “Silly Symphonies” were next in the studio’s parade of progress. Animated in full color, they too featured sound. Timeless stories like “The Tortoise and the Hare” and “The Grasshopper and the Ant” followed. All have endured, remaining witty and fresh despite the passage of time. And with the success of Mickey and the popularity of “The Silly Symphonies” series, Disney decided to take the art of animation to even greater heights. Always a pioneer, Walt decided to make a full-length animated feature. His choice was a Grimm’s fairy tale, “Snow White and the Seven Dwarfs.”

By spring 1936, “Snow White” was in production. The film cost nearly $1.5 million, a princely amount in those days.

“Snow White” was quite a success, and in 1938 child star Shirley Temple presented Walt Disney with a special Academy Award, incorporating one large and seven little Oscars to honor his masterpiece. Though many Oscars have been awarded to the Disney Studios since then, it wasn’t until 1991 that an animated film, Disney’s “Beauty and the Beast,” was nominated as one of the five best pictures of year. Once again Disney’s Studio made animated history.

In the lavishly illustrated work “The Art of Walt Disney From Mickey Mouse to the Magic Kingdom,” author Christopher Finch describes Walt Disney as “a man who believed absolutely in his own instincts and abilities, an artist who would go to any length to ensure a project was carried out exactly as he had conceived it. He surrounded himself with talent, but at all times the master plan was in Walt Disney’s head.”

Walt Disney left us on December 15, 1966. He died at St. Joseph’s Hospital in Burbank, directly across from the Disney Studios which he founded.

To fully examine Disney’s legacy, check out the the two-part, four-hour film “Walt Disney: He Made Believe.” This AMERICAN EXPERIENCE film, which aired on PBS and is now available on DVD, examines Walt Disney’s complex life and continuing legacy. This highly entertaining and informative film features rare archival footage from the Disney vaults as well as interviews with biographers, historians, animators and designers who helped turn Walt’s dreams into reality.

Shortly after Walt left his Magic Kingdom for an Eternal Kingdom, his studio foundered. Fortunately when his nephew Roy E. Disney took over the studio classic animation was once again a top priority. Since then the imagineering at the Walt Disney Studios has continued to flourish.

It’s hard to believe that Walt Disney has been gone for 51 years, because his magical formula for family entertainment lives on in the 21st century. His fantastic realms of Disneyland, Disney World and Epcot continue to evolve and flourish. In fact, his magical kingdoms have spread to other world cities like Paris and most recently Shanghai. Disney Studios also continue to create family friendly film blockbusters like  “Frozen” and the hilarious “Zootopia,” which are both billion dollar ‘Disney Babies.’