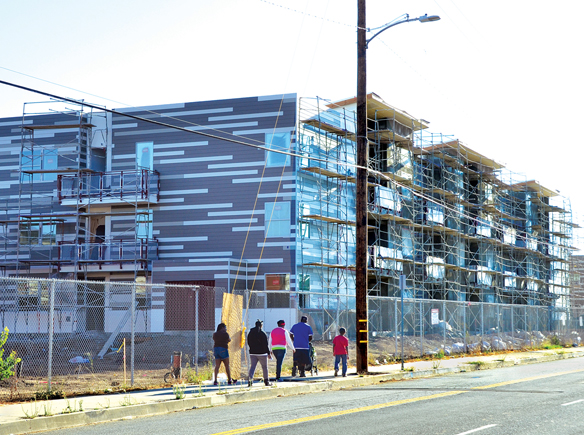 The first phase of units at the Sage Park Apartments on West 177th Street will be completed in late August, officials said.

At that time, 46 of the 90-unit residential complex, located on the north side of the Gardena High School campus, will offer one, two, and three-bedroom apartments for families of up to four who have an annual income of approximately no more than $50,000 per year.

The first phase of units at the Sage Park Apartments on West 177th Street will be completed in late August, officials said.

At that time, 46 of the 90-unit residential complex, located on the north side of the Gardena High School campus, will offer one, two, and three-bedroom apartments for families of up to four who have an annual income of approximately no more than $50,000 per year.

The $28-million Sage Park project is the result of a partnership between the San Francisco-based land development company Bridge Housing and the Los Angeles Unified School District (LAUSD). (Although centered in the city of Gardena, the GHS property is part of Los Angeles City.)

Amenities for the units include a fitness room, a community room, laundry facilities, and a community garden, according to the project specs.

Bridge Housing officials say the complex is about more than a place to live. They said their concerns were on the environment, which led them to create a landscaping plan that would accommodate planting and related materials that are sustainable and respect the existing environment.

This aspect of the project was so important that Bridge Housing achieved silver certification from the Leadership in Energy and Environmental Design (LEED).

Adjacent to the newly-constructed apartments on a one-acre parcel of land is an obstacle training course that was built for use by the LAPD’s Juvenile Impact Training Program, a regimented military-style boot camp for at-risk youth.

Kristina Tokes, LAUSD’s director of facilities planning and development, said that initially, the units will be made available for qualified district employees.

“The district has priority for the units and then once our staff fill the units, if there are any other units remaining, then they will be made available to the public,” Tokes said.

In order to qualify for a residential unit at Sage Park, prospective tenants must go through third-party verification of all income and assets as well as a credit check and a criminal background screening. Landlord references are also required in addition to two in-person interviews with the property management staff.

According to Slaby, rents for each of the units will be 30 to 60 percent of Area Median Income. This amounts to approximately $431 per month on the low end to $1,241 on the high end depending on the family’s income, household and apartment size.

Slaby said that their partnership with LAUSD inspired Bridge Housing to create an education theme around some special services provided just for residents.

Once tenants have moved into the units, they will have an opportunity to take advantage of free educational programs with the help of service coordinators.

Depending on the outcome of a needs assessment performed by their Resident Programs and Services Division, Bridge Housing service coordinators will offer educational services such as homework help for school-age youth, financial literacy, English as a Second Language and health/wellness education.

Tokes said Sage Park Apartments was conceived over a decade ago when LAUSD realized they had several acres of land that were not being used. She said it was the district’s idea to build affordable housing on the unused land for both the community and school staff.

Groundbreaking on the Sage Park apartments occurred in June 2013, with several members of the development team including LAUSD Chief Facilities Executive Mark Hovatter and LAUSD Board Member Richard Vladovic.

At the ceremony, Vladovic called the Sage Park project a model for success that he wanted to see implemented district-wide. Hovatter expressed the hope that Sage Park would encourage other organizations to join LAUSD in creating more planning projects in the communities served by the school district.

Anyone who would like more information on renting a unit in the Sage Park apartments can call 310-205-2583 or visit www.bridgehousing.com

Bittersweet ‘A Song at Twilight’ at Pasadena Playhouse; ‘Inside Llewyn Davis’...