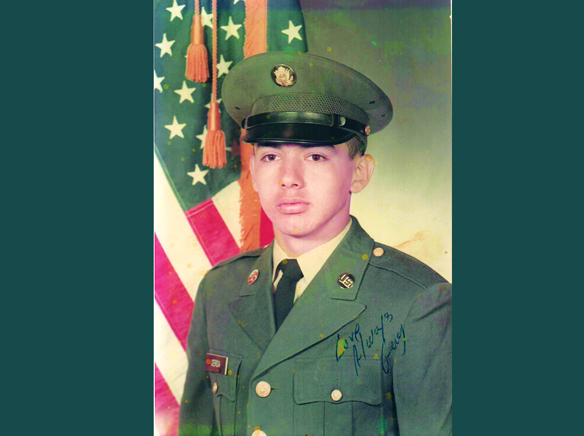 Guy Cerda was in a deep slumber when his life changed abruptly. The 18-year-old Los Angeles native was working the night shift at a local supermarket, and was sleeping soundly when his mother shook him awake on that fateful morning in January 1970.

“I think you better have a look at this,” she said.

Cerda rubbed the sleep from his eyes and stared at the letter his mother was holding in her hand. It was from the Selective Service System; Guy Cerda was being drafted.

Guy Cerda was in a deep slumber when his life changed abruptly. The 18-year-old Los Angeles native was working the night shift at a local supermarket, and was sleeping soundly when his mother shook him awake on that fateful morning in January 1970.

“I think you better have a look at this,” she said.

Cerda rubbed the sleep from his eyes and stared at the letter his mother was holding in her hand. It was from the Selective Service System; Guy Cerda was being drafted.

“This was mid-January and I was to report for induction on February third. It instructed me that I essentially had two weeks to get my affairs in order,” Cerda said.

He admitted that he was scared, but also that he had no hesitation about showing up.

“This was during the time that a lot of guys were dodging the draft and heading to Canada to avoid being inducted. But Uncle Sam was calling me, and I thought, ‘Okay, I’m going to do my commitment.’”

A few short weeks later, Cerda was one of a number of nameless, faceless recruits doing basic training at Fort Ord in Northern California. It was a frightening, life-altering experience, but one that the Jefferson High graduate soon reveled in.

“I thought it was a fantastic experience, and one that every young person should have,” he said. “It really reemphasized all of the good qualities we as individuals should have: discipline, respect for other people, for property, and for authority.”

Besides contributing to his mental maturity, boot camp also developed Cerda in ways he never could have imagined.

“When I entered boot camp, I was a scrawny one hundred forty five pound kid. And when I graduated, I was a one-hundred sixty-five-pound man; between all of the exercise and square meals, I packed on twenty pounds of muscle in just eight weeks.”

It was in boot camp though that Cerda experienced one of the most comical moments in the service.

“We were only three weeks into basic when myself and a couple of other recruits were ordered to pull guard duty and protect the ammo dump,” he recalled. “The only problem was, we hadn’t been qualified yet with firearms and so they couldn’t give us guns. So instead, they gave us axe handles and told us to guard the dump from any intruders. I don’t know what we were supposed to do with axe handles if someone really wanted to break in, but in the military you do what you are told to do with what you have.”

After basic training it was determined that Cerda would stay stateside to help serve his country. His experience working in a grocery store had made him a natural for a job as a supply specialist. He remained at Fort Ord and was assigned to the 101 St. Transport Unit. He and his fellow soldiers were responsible for maintaining all of the stocks that a fighting force would need to be mobilized anywhere in the world within 48 hours.

“We didn’t have any specific training classes, and instead learned our jobs through OJT,” he said.

Cerda must have learned well, because during his stint at Fort Ord, orders came up twice that he was to be deployed to Viet Nam.

“My superiors always pushed back though, and said that I was too valuable for them to let me go; they always got my orders waived.”

In spite of his busy schedule, Cerda still found time to carry on with the part of his life he left behind when his draft notice came through.

“I knew that there was always a chance that I would get sent to Viet Nam, and I really wanted to have something to come home to and to fight for, and so I got married while I was serving,” he said. “And before long my wife was pregnant with our first child.”

Guy Cerda was mustered out of the Army after just 21 months, three months shy of his two-year commitment. President Richard Nixon, the same Commander in Chief who had ordered the randomizing of the Selective Service through lottery, was now planning to eliminate it altogether and draw down the troop levels.

He left active duty, but continued to fulfill his commitment of four years as a reservist. In the meantime, he attended college and built a comfortable life for he and his family.

Although he never saw combat, Guy Cerda is proud of his military service, and would have gone into battle if ordered.

“The one thing I know,” he says. “Is that this freedom is not free, and that someone has to pay for it.”

To nominate a veteran or share your own story, please go to Gardena Honored Veterans website at http://www.ci.gardena.ca.us/Stories/honored%20veterans.html

Christopher J. Lynch is a Gardena resident and is the author of Eddie: The life and times of America’s preeminent bad boy, an authorized biography of Ken Osmond, the actor who played the unctuous truant Eddie Haskel on Leave it to Beaver.