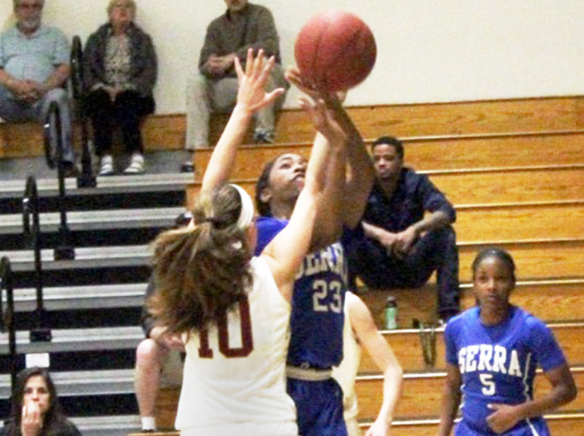 Serra High’s girls’ basketball team led throughout most of the game against host Oaks Christian, but went cold in the fourth quarter and fell to the Lions 45-40 in the CIF-Southern Section Open Division consolation finals last Friday in Westlake Village.

The Cavaliers, who fell to 19-10 overall, held a 33-31 lead after three periods due to a buzzer beating 25-foot three-point basket by Briana Johnson.

Serra High’s girls’ basketball team led throughout most of the game against host Oaks Christian, but went cold in the fourth quarter and fell to the Lions 45-40 in the CIF-Southern Section Open Division consolation finals last Friday in Westlake Village.

The Cavaliers, who fell to 19-10 overall, held a 33-31 lead after three periods due to a buzzer beating 25-foot three-point basket by Briana Johnson.

Oaks Christian, though, returned the favor when Katie Campbell hit a three-pointer to give the Lions a 34-33 edge to start the fourth period. Camille Hailey answered back with her three to give Serra a 36-34 advantage but Autumn Naylor’s basket tied the game and Roxy Barahman scored to give Oaks Christian the lead for good as the Lions outscored the Cavaliers 14-7 in the final quarter.

Hailey’s three-pointer was the only field goal by Serra in the fourth period as the Lions’ defense stifled them.

The Cavaliers started the game well with an early 10-3 lead, behind two three-pointers from Brooke Bayman. Serra led 22-19 at halftime.

It was the second time this season that Serra lost to Oaks Christian. The Lions topped the Cavaliers 54-46 in a showcase classic on Jan. 14 at Sierra Canyon High in Chatsworth.

Campbell led all scorers with 18 points for the Lions, including five three-pointers.

The Cavaliers move back to Division I in the California state playoffs that began Wednesday. Serra opens the Southern California Regional Division I Tournament at home against CIF-Los Angeles City Section Division I champion Westchester. The Comets, who are head coached by ex-Carson mentor Marcel Sanders who guided the Colts to two L.A. City Division I titles a few years back, won the crown with a 50-43 win over Bell Saturday at Cal State Dominguez Hills. Serra is the No. 4 seed in the regionals. Oaks Christian is second seed and Southern Section Division IVAA champion Torrance Bishop Montgomery is seeded seventh in Southern California Division IV. The Knights defeated San Juan Capistrano Junipero Serra 59-49 for the crown last Friday at Godinez High in Santa Ana.

If Serra tops Westchester, it will face either Moreno Valley Canyon Springs or L.A. University at home Saturday at 7 p.m.

The Cavaliers began by sweeping a doubleheader over Flintridge Prep by 10-0 and 4-1 scores on Feb. 28 at Serra. On March 3 in the Huntington Beach Edison Tournament, Serra lost to a very good California High team from Whittier 11-5. On March 4, the Cavaliers bounced back by routing Lynwood Firebaugh 15-2.

Against Firebaugh, winning pitcher Jose Silva went five innings with a four-hitter in the mercy rule contest. Silva walked one.

Senior Mateo Brambila went 2-for-4, drove in two runs, and scored one. Brambila had a double and triple.

Larry Williams went 2-for-3 with one run batted in, three runs and a double. Adrian Morales went 1-for-2 including a two-run triple. He scored once. Morgan Lomax had a hit, walked twice, stole three bases and scored one. Carlos Fernandezees had a two-run double.

Serra will open the Harvard-Westlake Tournament at home against Oaks Christian Saturday at 11 a.m. The Cavaliers visit Warren High in Downey next Tuesday at 3:15 p.m.

The Knights were led by 6-foot-7 sophomore center-forward Jordan Schakel who scored a game-high 19 points, 10 of those in the third quarter.

Bishop Montgomery trailed by as many as six points in the first half but came on strong that included a 14-0 run where Schakel scored many of his points, including three three-point baskets.

The Knights, who won their 22nd consecutive game and improved to 29-1, shot 56.5 percent from the floor in the second half.

Kameron Edwards had 12 points and 11 rebounds for Etiwanda.

Bishop Montgomery is also the top seed in the Southern California Regional Open Division where it opens against CIF-San Diego Section Open Division runner-up St. Augustine Friday at 7:30 p.m. If the Knights win, they could show down with power Santa Ana Mater Dei or another South Bay power Westchester at home next Tuesday. The Monarchs, who lost to Etiwanda 52-49 in the Open Division semifinals on March 3 at Mater Dei, are seeded fourth and the Comets, who fell to Western League rival Fairfax in the L.A. City Open Division finals 56-47 last Saturday at Cal State Dominguez Hills and are head coached by former Gardena High basketball player Ed Azzam (Class of 1972)

Being in the Open Division gave the Panthers the award of playing in the Southern California Regional Division II playoffs where they are seeded 10th. Gardena opened the playoffs at No. 7 La Mirada (CIF-Southern Section Division IIA semifinalist) Wednesday. If the Panthers can defeat La Mirada, they will face either second seed Anaheim Canyon, which rallied from a 28-point third quarter deficit to top Lawndale 103-98 in double overtime in the Southern Section Division IIAA championship last Saturday at the Honda Center, or San Diego Kearny at a site to be determined in the quarterfinals next Tuesday at 7 p.m.

Jessica Malazarte led the Knights with 17 points, 12 of those in the second half.

The Knights are seeded seventh in the Southern California Regional Division IV playoffs where they began Wednesday against Central Section school Orosi. If Bishop Montgomery wins, it will visit No. 2 seed Oaks Christian in Westlake Village Saturday at 7 p.m.

The Saxons used a 16-0 late third quarter run to set up the comeback and took their first lead at 32-31 on Daylene Taualii’s basket early in the fourth period. North outscored the Hawks 20-4 in the third quarter. North won the Division IIIAA title and it was its first section title in the program’s history.

North enters the Southern California Regional Division III playoffs as the second seed and hosted Central Section school Arvin Wednesday. If the Saxons win, they will host either No. 7 South Pasadena or No. 10 Legacy from South Gate Saturday at 7 p.m.

South trailed by 12 points (47-35) with about 4:50 left in the game before finishing with a 22-9 run behind a winning basket from junior Kristy Takahashi with three second left. Takahashi led the Spartans’ scoring with 20 points. Jaryn Fagardo had 11 points, five rebounds and two assists. Alexis Henry tallied 11 points and three rebounds. South won the IIA championship.

The Spartans are seeded seventh in the Southern California Regional Division II playoffs where they hosted CIF-Los Angeles City Section Division II champion Garfield Wednesday. If South wins, it could either visit No. 2 Redondo, which rolled over Bay League rival Manhattan Beach Mira Costa 60-37 for the Southern Section Division IIAA championship on Saturday, or host 15th seed San Pedro from the L.A. City Section Saturday at 7 p.m. The Spartans will play one of those South Bay teams if they get by the Bulldogs.

West led most of the game in its win over Troy. Kayla Soto led the Warriors, who won the IA crown for their second consecutive Southern Section title. The Warriors began the Southern California Division I playoffs as the 10th seed and visited No. 7 Edison in Fresno last night. If West can knock off Edison, it will face either No. 2 seed Vista Murrieta or San Diego Section Chula Vista Eastlake at a site to be determined Saturday at 7 p.m.

GVN Athlete of the Week, June 12